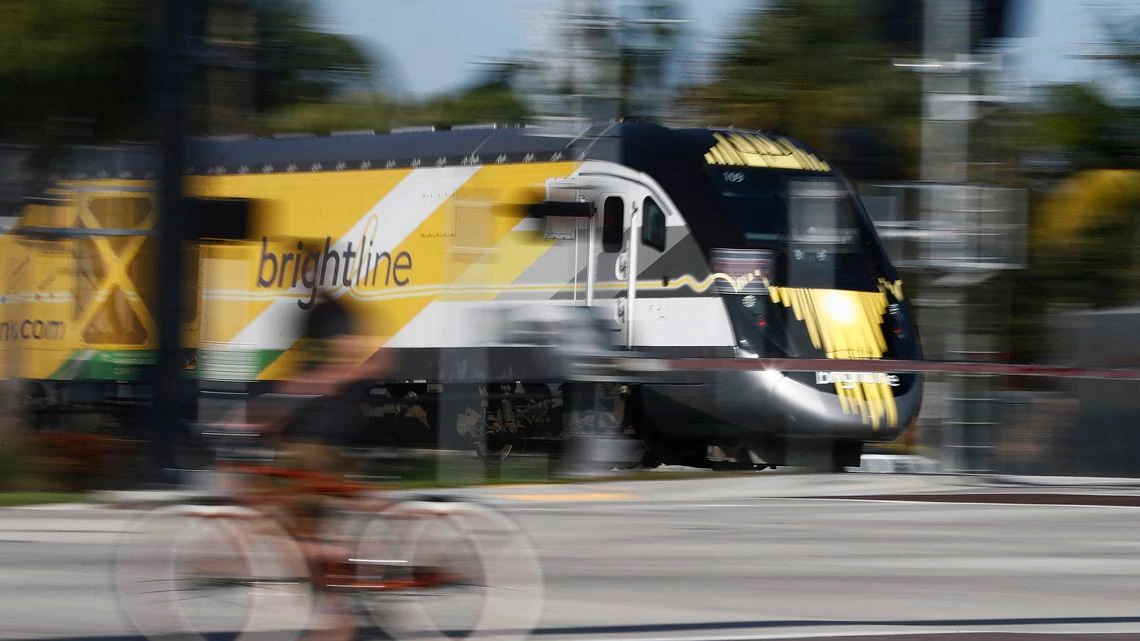 Brightline and the Florida Department of Transportation are asking for federal dollars to cover part of a $45 million effort to boost safety around the company’s intercity trains.

The Miami-headquartered company and FDOT are committing $10 million each to the “Florida East Corridor Trespassing and Intrusion Mitigation Project” for safety enhancements at crossings and along rail lines in seven Florida counties.

To complete the work, which encompasses hundreds of projects, the company and agency seek a $25 million federal grant.

The Palm Beach Post reported Friday on the plan and the funding request from the federal Rebuilding American Infrastructure with Sustainability and Equity (RAISE) discretionary grant program.

“All of us recognize that intercity passenger rail will move millions of people each year and be a vital part of Florida’s transportation network,” Brightline spokesperson Ben Porritt told Florida Politics. “FDOT, Brightline, and our partner communities are committed to enhancing safety along the rail corridor, and we will continue to identify funding opportunities like the RAISE grant moving forward.”

Of 328 crossing upgrades, 106 are to be done in Palm Beach County, according to a project summary Brightline provided to Florida Politics. The remainder would occur at crossings in Miami-Dade and Broward counties, where Brightline now provides rail service, and in Martin, St. Lucie, Indian River, and Brevard counties, where construction for future service is underway.

Altogether, Brightline and FDOT estimate the safety improvements — including 33 miles of pedestrian protection channelization features — should prevent 95 deaths and 146 accidents over the next two decades.

“State and local partners have prioritized these additional enhancements because expanding rail options and population density have created significant safety challenges,” the project summary says. “In 2019, Florida was ranked the third-highest state for railway trespassing (casualties) in the nation and the second-highest for casualties per track mile.”

An ongoing Associated Press analysis found Brightline to have the nation’s worst fatality rate per mile, with other Florida railroads not far behind. None of the deaths were determined to be the fault of rail companies or their personnel. FDOT has blamed, among other things, GPS confusion, ill-placed roadway markings and motorist errors.

There have been nearly 60 fatalities involving Brightline trains since July 2017 — mostly a result of drivers, bicyclists, and pedestrians failing to take safety precautions — six months before the company opened its services to the public.

The most recent accident happened Monday morning in Pompano Beach when a Brightline train struck a vehicle that drove around the crossing gate, according to a Brightline spokesperson and the conductor.

Based on photos accompanying a report by Local 10, the vehicle was obliterated. Broward Sheriff’s Office spokeswoman Gerdy St. Louis told Local 10 that the injuries the vehicle’s driver sustained were so severe and life-threatening that detectives with the BSO Traffic Homicide Unit were notified and are investigating the crash.

Improvements that Brightline and FDOT plan include:

— Pavement markings with large X’s called rail dynamic envelopes that alert pedestrians, motorists, bicyclists, and other roadway travelers of dangerous areas near railroad tracks. FDOT issued this new standard on Feb. 11, 2020, after finding the number of vehicles that stopped on or were too close to rail tracks went down by at least 15% after the new markings were added.

— Installing raised pavement markers, edge striping, and collapsible or flexible poles known as delineators on both sides of a crossing to block motorists from driving around gates. In 2018, the Long Island Railroad added high-visibility delineators and striping at crossings, resulting in an 85% reduction in vehicle intrusions and 100% reduction in train/vehicle crashes due to vehicles intruding on tracks.

— Fencing and landscaping to “channelize” rail corridors by keeping trespassers from getting onto tracks.

Additional signage, including “Do Not Stop on Track.” Central Florida commuter train service Sunrail saw a 91% reduction in trespassers in the two years after installing fences in Sanford.

RAISE projects are “rigorously reviewed” and “evaluated on statutory criteria of safety, environmental sustainability, quality of life, economic competitiveness, state of good repair, partnership and innovation,” according to a recent U.S. Department of Transportation release announcing a $1.5 billion infusion into the program.

At least $15 million in RAISE funds this year are guaranteed to go toward projects in areas of persistent poverty or historically disadvantaged communities. Brightline and FDOT note that more than 90 such communities are adjacent to rail locations targeted for safety improvements.

The company and agency said the improvements would generate at least $415.2 million in benefits.

Brightline is at work on an additional leg from West Palm Beach to Orlando International Airport and Disney Springs in Orange County. Once completed, the plan is to have 36 passenger trains run along the corridor daily.

Another extension to PortMiami would make it so that once the Disney and port stations are operational, visitors to and residents of Florida could fly into Orlando, spend time at Walt Disney World, hop on a Brightline train, and within hours and without having to rent a car, set sail on a cruise.

The company is also planning further expansion into Central Florida, including a Tampa link.

Read the Trespassing and Intrusion Mitigation Project sheet below.

nextDiagnosis for 5.2.22: Checking the pulse of Florida health care news and policy