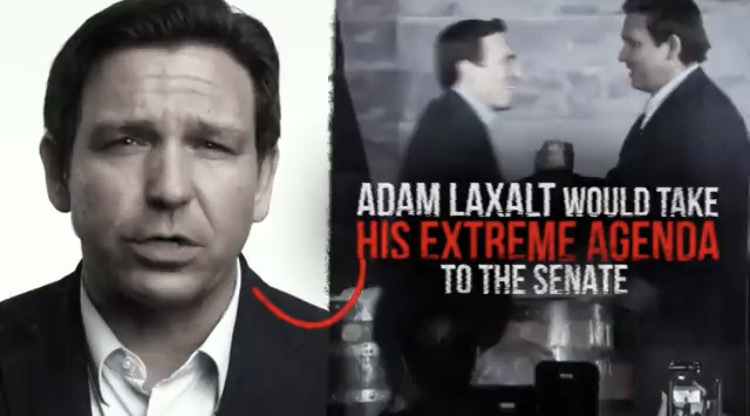 DeSantis' friend in the race is 'dangerous for Nevada women.'

Gov. Ron DeSantis isn’t on the ballot in Nevada, but his proximity to a Republican Senate candidate brought him in the line of a fire in a new ad rolled out Monday.

U.S. Sen. Catherine Cortez Masto, a first-term Democratic Senator seeking re-election this year, focused on abortion restrictions championed by DeSantis and later signed by the Governor. These apply to pregnancies past the 15th week of gestation.

The 30-second spot, tweeted out by the incumbent, led with mournful piano music and a narrator saying DeSantis “signed an abortion restriction bill that makes no exceptions for rape or incest.”

The graphic charges that Laxalt would take DeSantis’ “extreme agenda” to the Senate. And the Governor said there is no one he “trust(s) to join (him) in this fight” more than Laxalt.

“We need his leadership in the United States Senate,” DeSantis intones, as the graphic lashes Laxalt as “dangerous for Nevada women.”

DeSantis hasn’t been profligate with his endorsements thus far this cycle, but has put in the work for Laxalt, a former roommate of the Governor’s, including a visit late last month on Laxalt’s behalf.

Much like his political mentor Donald Trump, DeSantis saw the rally as an advertisement for himself. The Nevada Independent said he “spent roughly 20 minutes praising his tenure and achievements in Florida before touting Laxalt’s bid.”

“Greetings from the Sunshine State, the freedom state, and the state that has done more than any other state to stand up to Joe Biden,” DeSantis said.