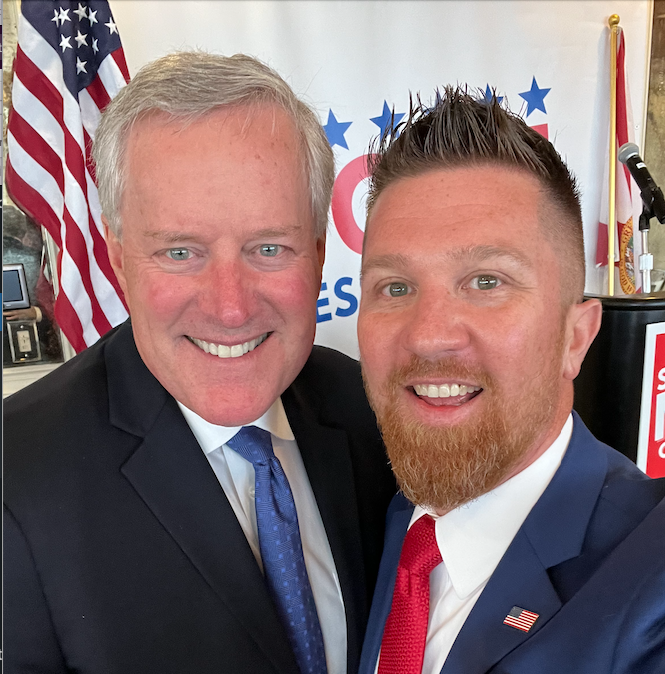 Meadows, a former North Carolina congressman who served as Chief of Staff for the last 10 months of former President Donald Trump‘s administration, delivered an endorsement Monday for Moore and a push for the America First wing of the Republican Party in the Orlando-Kissimmee district in the Aug. 23 Primary Election.

Moore, of Orlando, is one of 11 Republicans seeking a shot at three-term Democratic Rep. Darren Soto of Kissimmee, in the redrawn CD 9. In the map approved in Special Session last month, but now tied up in courts, CD 9 covers Osceola County and a much larger portion of southern Orange County than before. It appears to have a moderate Democratic lean, based on results of the past couple of General Elections.

Moore is a Minnesota native who got his bachelor’s degree at Minnesota State University Moorhead. He is a consultant and former missionary who spent 21 years with with Cru (formerly Campus Crusade for Christ.) He spent six years in Brazil, and traveling throughout Latin America from there. He and his wife Ester Moore, a Brazilian native and naturalized American citizen, have two daughters. They settled in Orlando in 2007.

Moore is an avowed follower of Trump’s America First platform and says he believes the 2020 election was stolen from Trump.

“Ramping up from the 2016 election and beyond, and going into the 2020 election, I had a significant concern for where our country is heading, specifically regarding our kids, my kids, the future of our country,” Moore said. “I was convinced that we need strong people.”

He says the overriding issues going into the 2022 election are election integrity and parental rights.

“The other thing is parental rights, what’s happening right now with our kids. I believe government overreach has been significant in so many different ways, very dangerous,” Moore said. “Part of the job of Congress is oversight. What good is it to have checks and balances if they’re not used?”

“There was a lot of energy, a lot of momentum in the room. Hearing from former White House Chief Mark Meadows was inspiring, to hear some of his personal stories, but also to hear his personal backing as citizen Mark Meadows, a personal endorsement, it’s very inspiring and encouraging, and it’s just a great momentum builder,” Moore said,

Meadows is one of the witnesses most sought by the Jan. 6 Commission investigating the 2021 insurrection attempt at the U.S. Capitol. The committee voted in December to hold him in contempt of Congress for not testifying after lawmakers revealed a series of frantic texts he received as the attack was underway.

Meadows has remained close with Trump, though they have not always endorsed the same candidates.

Moore is hoping a Meadows endorsement will lead to a Trump endorsement.

“They’re good friends and they listen and I sure would like to earn President Trump’s endorsement. And when that time is appropriate and right, and President Trump feels ready to do that, I’ll be willing to talk with them and connect with them. I sure hope so. But I’m not pressing him for that,” Moore said.

previousLast Call for 5.16.22 — A prime-time read of what’s going down in Florida politics