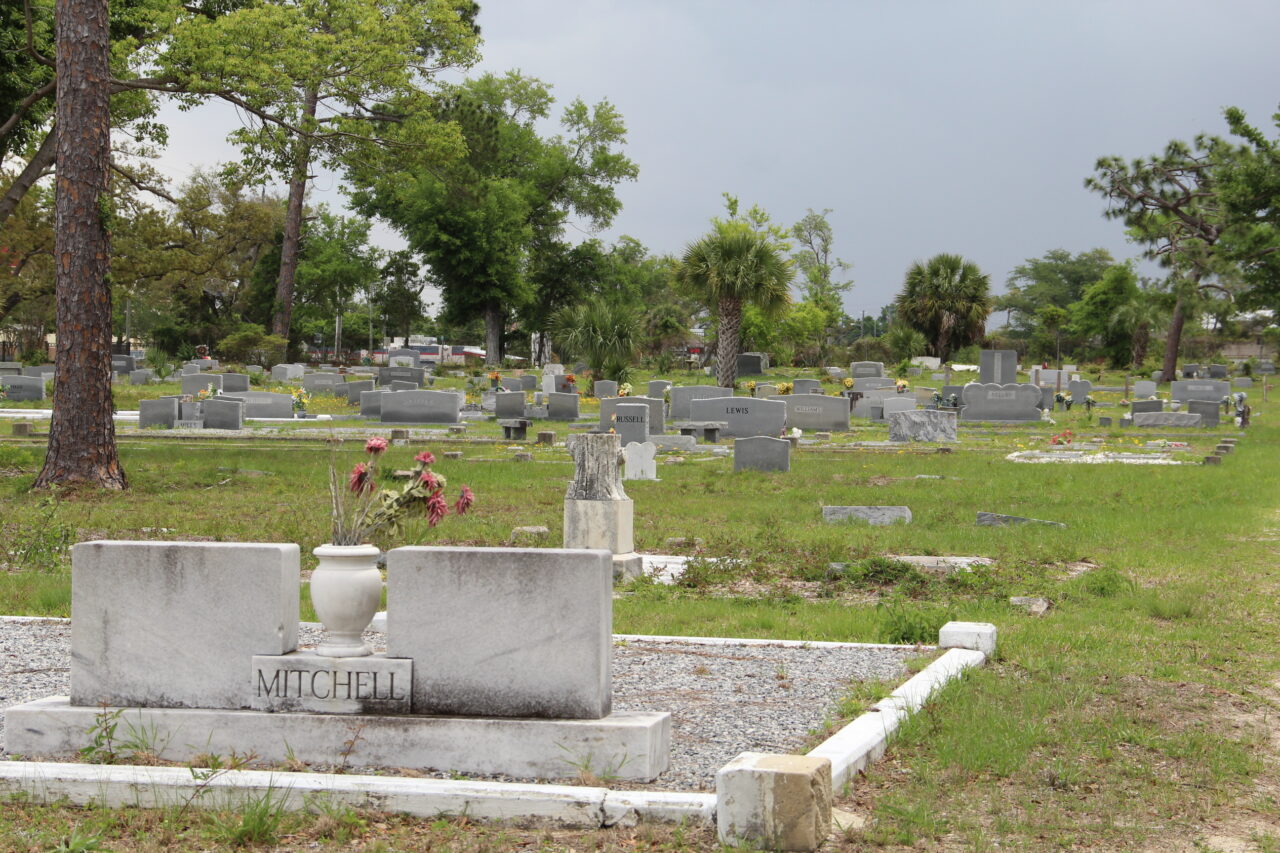 'This isn’t an isolated story.'

In the early 1900s, two cemeteries were established in Panama City — one for White residents, the other for African Americans. While the White cemetery is well maintained to this day, the Black burial ground is under a Goodyear tire shop.

Oakland Cemetery and its counterpart, locally known informally as the Balboa Cemetery or the Panama City Colored Cemetery, are about a half mile apart. After more than a century, the African American cemetery, established on the southwest corner of Balboa Avenue and 15th Street, has nearly faded from history.

Balboa is one of many abandoned African American cemeteries that have recently been discovered throughout Florida. Sen. Janet Cruz, a Tampa Democrat, has said archaeologists believe there are nearly 3,000 lost Black cemeteries in Florida.

In Tallahassee, New Hope Cemetery was recently discovered behind Testerina Primitive Baptist Church. And in Groveland, another abandoned Black cemetery just received a state grant that will kickstart restoration efforts.

In March, the “Abandoned and Historic Cemeteries” bill, sponsored by Tampa Democratic Rep. Fentrice Driskell, was stalled without ever coming to a full House vote. The bill would have enacted some recommendations of a state task force that spent a year researching abandoned cemeteries. It would have created the Office of Historic Cemeteries within the Department of State to focus on restoration and research efforts for all lost cemeteries, not just those of African Americans. Its companion bill in the Senate, sponsored by Cruz, never made any progress. The lawmakers have vowed to reintroduce the measure in the next Legislative Session.

Oakland Cemetery, originally known as the Panama City Cemetery, was established in 1908 by the Gulf Coast Development Company, under the direction of George Mortimer West, the city’s founder.

West set aside the land for the cemetery as part of amenities — including parks, churches and schools — that he recognized every city would need, said Nancy Hudson, member of the Historic St. Andrews Waterfront Partnership board of directors, which tries to promote growth and revitalization of St. Andrews, as well as awareness of Panama City’s history. West’s uncle had been buried at the site in the 1890s, she said.

Over 100 years later, Oakland Cemetery remains in good condition, despite damage from Hurricane Michael in 2018. Rows of headstones with still easily legible names, statues of angels and flowers adorn the property, which is bigger today than it was when it was founded.

Hudson said West’s second wife, Luella, named the cemetery Oakland Cemetery and chose the West family plot. George and Luella’s graves can be visited at the historic site, which is maintained by Panama City.

Burials are still taking place there. Hudson said all the plots have been purchased over the years and are now privately owned.

The Bay County Historical Society last year awarded the cemetery an official Bay County historical marker with a ceremony to honor the recognition.

“When we think about today, we think about acknowledging our past, our present and looking to the future,” Mark McQueen, Panama City’s city manager, said on the day of the ceremony according to an account in The News Herald. “Today is a singularly outstanding day because of commitment and passion and dedication.”

Hudson hopes for more recognition in the future, including placement of the cemetery on the National Register of Historic Places.

The Balboa Cemetery has met a very different fate.

In 1922, the cemetery was dedicated as an official public cemetery. But some 20 years later, in the 1940s, the three-acre property lost its tax-exempt status and became a taxable property unlike Oakland Cemetery, which is tax-exempt, according to Cvornyek, the FSU history professor.

“When no one pays taxes on [Balboa], it’s sold to an individual in Georgia who later sells it to business folks here in Panama City,” said Cvornyek, who has been collecting records on Balboa Cemetery for about two years. “Once it falls into private hands it shifts back and forth. I mean, there’s a whole list of folks who own the property, but ultimately, by the 1970s, it becomes a Goodyear tire store.”

Barbara Hatala, spokesperson at Goodyear Tire & Rubber Co., said the company does not own the property but leases it.

Property ownership records said the land is currently owned in the name of a limited liability corporation — 15th Street Pc FL LLC — whose structures are often intended to obfuscate the identities of the people involved. The corporate address listed for 15th Street Pc FL LLC is a post office box in Chamblee, Georgia, that is the same address for at least 14 other limited liability corporations active in Florida. All are associated with Mark or Nancy Nelkin, who own and operate a real estate company in Atlanta.

Michelle Nelkin, another family member, said the family does not own the cemetery land — but she did not respond to questions about the family’s connections to the corporation listed as the property’s owner.

“We do not own the property that you’re referring to,” she said. “I urge you to double check the owning entity name.”

According to Cvornyek, a lawsuit was filed in 1956 on behalf of the African American community to try to save the three-acre cemetery. But the lawsuit was unsuccessful.

“It was, to me, a sort of cold land grab on the part of the city to take property that they understood would later become important,” Cvornyek said. He said the city excavated some graves and sent corpses to a communal grave in the Lynn Haven Community Cemetery.

Buddy West, a descendant of George West who is turning 80 this year, remembers hearing about the case when he was young: “There was a bunch of dirty dealings back then.”

In the late 1960s, the remains of approximately 30 individuals were re-interred at Lynn Haven, seven miles from Balboa. A total of approximately 150 African Americans are believed to have been buried at the Balboa Cemetery, Cvornyek said.

West also recalled hearing a story from a local dairy farm owner at the time. He said a woman, who worked as a maid, began crying while driving past the cemetery. She tearfully explained that a relative had been disinterred, and she didn’t know where he had been moved. “It was just bad,” West said.

An original 1913 plat map of Balboa Cemetery that Hudson keeps in the The Panama City Publishing Company & Museum, shows there were 216 plots in an area 330 feet by 234 feet. Each of the plots could have held multiple bodies.

“I know it existed when I was a child,” said Matthew Shack, 79, a local historian. “But what happened is that land became valuable especially within the city limits.” He added: “They would find a way to snatch that, for lack of better words, from the Black community.”

Shack said when he returned to the community after 40 years away, “I came back and it was gone.”

Using records from the Bay County property appraiser, Hudson was able to map out approximately where the cemetery used to sit. Today, this includes not only the ground beneath the Goodyear, but likely a martial arts studio. The rest of the cemetery most likely sits under 15th Street.

“It’s just so disrespectful,” Hudson said. “It’s very sad. I can’t imagine. I mean I can ride by (Oakland) cemetery, and I know where George (West) is. I know where people are.”

Amy Galo reporting; produced by Fresh Take Florida, a news service of the University of Florida College of Journalism and Communications. The reporter can be reached at [email protected].

previousWinner and Loser of the Week in Florida politics — Week of 6.5.22