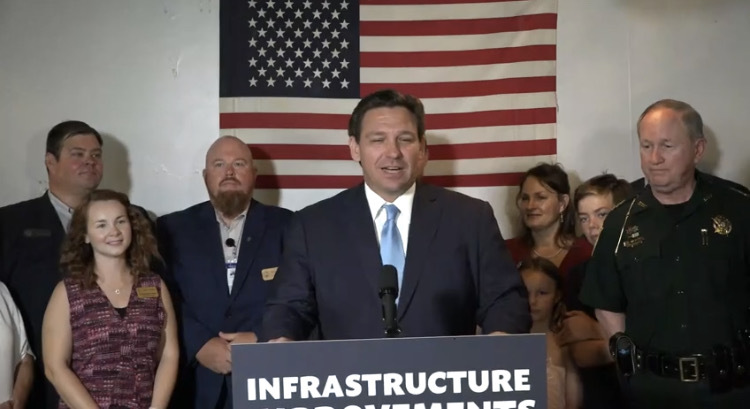 'We've got a problem in the Western Hemisphere.'

At a barbecue restaurant in Nassau County Monday, Gov. Ron DeSantis served up grim warnings about “disastrous” political changes in Colombia, symbolic of advances made by totalitarian Marxists in the last quarter-century.

“We watched the election results in Colombia,” DeSantis said, noting Colombian Americans in Florida were “very concerned about what’s going on.”

“I think the results of that election have been very, very troubling for people that believe in freedom in the Western Hemisphere. To elect a former narco-terrorist and a Marxist to lead Colombia is going to be disastrous, and so we stood with the people here in Florida that have ties to Colombia,” DeSantis said.

“We have a great relationship with Colombia as a state. We were all hoping that the outcome would be different, but we’ve got a problem in the Western Hemisphere with Marxism and totalitarianism really spreading.”

The election is the latest in a series of setbacks in Colombia that DeSantis has identified. Late last year, he took issue with the Joe Biden Administration removing “the radically communist Revolutionary Armed Forces of Colombia (FARC) from the United States list of foreign terrorist organizations.”

“President Biden’s decision to remove the FARC from the State Department’s list of Foreign Terrorist Organizations will embolden terrorist groups throughout Latin America, empower narco-traffickers and pave the way for Castro-chavismo in Colombia,” DeSantis warned.

In 2019, Lt. Gov. Jeanette Nuñez led an Enterprise Florida trade mission to Colombia, the second state trade mission of that year. A media release from the Governor’s Office noted at the time that Florida accounted for 24% of Colombia’s U.S. trade.

“We’ll continue to stand with the people of Florida here, who are passionate about freedom in the Western Hemisphere, particularly in Colombia,” DeSantis closed. “But very, very disappointing and very, very troubling result in that election.”

Democratic candidate for Governor Charlie Crist says while “there have been concerning, even radical ideas expressed in the past by the new President-elect and his campaign, we hope that Colombia’s new head of state will honor and hold fast to the democratic principles that culminated in yesterday’s vote. “

Florida Democratic Party Chair Manny Diaz said he is “concerned that the newly elected leader, Gustavo Petro, has in the past aligned himself with the policies of the Castros, Hugo Chavez, and Nicolas Maduro, which have brought so much pain and suffering to Cubans and Venezuelans.”

The election in Colombia of a former narco-terrorist Marxist is troubling and disappointing. The spread of left-wing totalitarian ideology in the Western Hemisphere is a growing threat. Florida stands with Colombian Americans on the side of freedom. pic.twitter.com/0O7UVccH6M