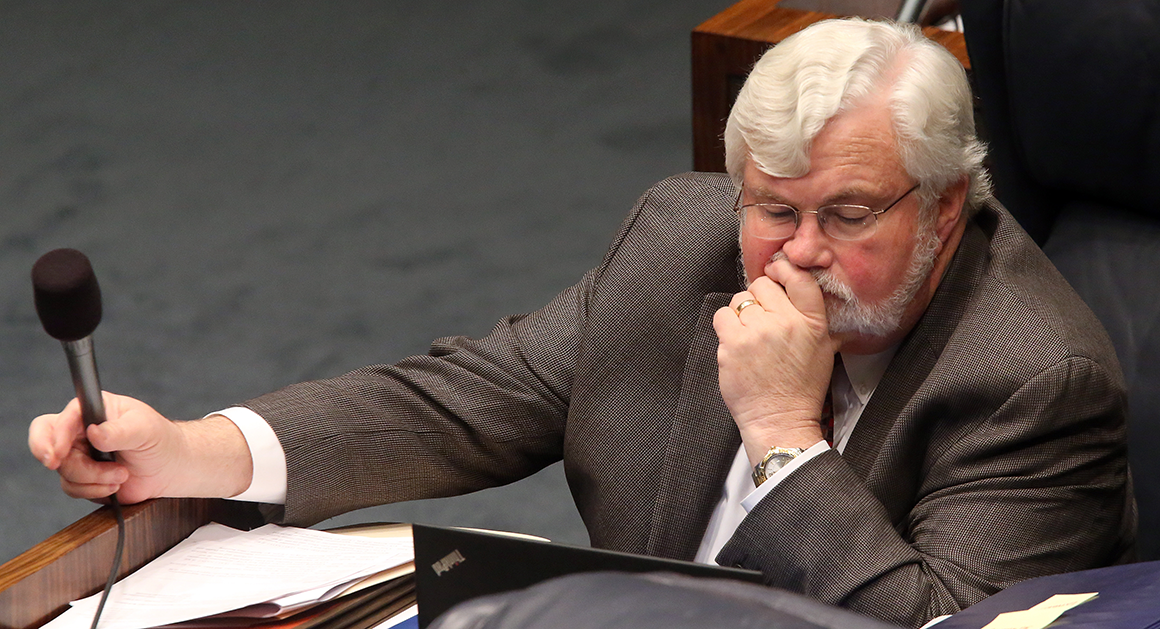 Latvala violated the law 'by using his position as Senator and/or committee chair to engage in sexually or romantically oriented comments, behavior and/or invitations to a female lobbyist.'

Former Sen. Jack Latvala will be censured as part of an apparent settlement with the Florida Commission on Ethics that would appear to be the last chapter in the sexual harassment allegations against the Clearwater Republican first made public more than four years ago.

The settlement, dubbed a Joint Stipulation of Fact, Law and Recommended Order, is signed by Mark Herron, Latvala’s attorney, and Elizabeth Miller, advocate for the Commission. It acknowledges Miller recommended a finding of probable cause that Latvala violated three state laws barring public officials from accepting “anything of value” in exchange for a particular action made in their official capacity.

But the settlement also states two of the allegations should be dismissed and only the third, that Latvala “corruptly used his official position” to “secure a special privilege, benefit or exemption for himself,” is recommended to be upheld.

Latvala “admits he used poor judgment as part of a consensual 20-year relationship, which because the female was a lobbyist may have constituted a technical violation of Section 112.313(6), Florida Statutes, but there is no evidence this affected his official actions in any way,” the settlement states.

But the settlement also states “it is unlikely that the evidence could establish to a level of clear and convincing proof” that Latvala committed the three alleged violations of state law. However, it also contains an admission from Latvala regarding the third allegation.

Latvala “violated Section 112.313(6), Florida Statutes, by using his position as Senator and/or committee chair to engage in sexually or romantically oriented comments, behavior and/or invitations to a female lobbyist.”

Allegations against Latvala first became public in a POLITICO story in 2017, citing six anonymous women, including lobbyists and Senate staffers, detailing allegations of groping and sexual innuendo. A subsequent Senate investigation into the matter revealed Latvala’s repeated sexual harassment and allegations he would vote favorably for a lobbyist’s issues in return for sexual favors.

Laura McLeod later came forward in the Miami Herald as the lobbyist involved in a long-term relationship with Latvala. The relationship was consensual, but McLeod said she also felt compelled to placate Latvala, who was a powerful Senator and chaired the budget committee. She said she was pressured to have sex with him in 2015 and 2016. Another woman, Rachel Perrin Rogers, a Senate staffer at the time, also came forward with sexual harassment allegations against Latvala.

Texts from Latvala to McLeod also suggest he was willing to use his office to threaten action or inaction in return for sexual favors.

“Maybe I should sit on the bill another week at least until I hear that sound (of having sex),” Latvala wrote to McLeod in February 2016.

Latvala has denied some of the allegations but resigned in December 2017. The ethics complaint still worked its way through the Commission, however, culminating in a finding of probable cause in March.

The settlement recommends Latvala be censured, and the matter be referred to Senate President Wilton Simpson for further action. But since Latvala is no longer a Senator, it’s unlikely the Senate has any power to punish him.

The Commission will meet on July 22 to take action on the settlement.