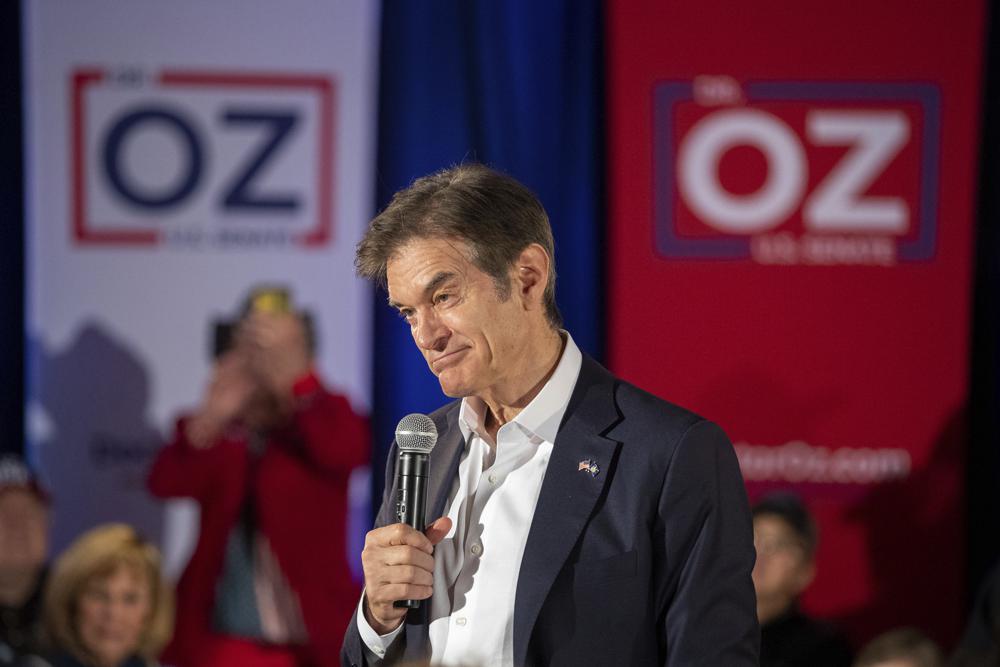 He also claimed to own a hunting ranch in Florida.

Television personality Mehmet Oz spent months in a Pennsylvania U.S. Senate race touting a history of hunting in Florida. However the state Fish and Wildlife Conservation Commission has confirmed Oz never had a license to hunt in the Sunshine State legally.

It’s legal to do some hunting in Florida without a license, but the state limits what and where to hunt game. The absence of a Florida license for hunting indicates Oz’s sporting activities may have run afoul of legal requirements, or they were more limited than the Republican candidate asserted during his campaign.

Videos released through the campaign show Oz in a different setting than the one seen by talk show viewers. An April ad started with a close-up of Oz’s hands as he loaded and cocked a double-barrel shotgun and later fired a pistol. He discusses hunting as a child with his father and doing the same now with his son.

“When people say I won’t support guns, they’re dead wrong,” he says before firing a shell at a clay skeet.

That hunting would play a major role in the GOP Primary is no surprise to Pennsylvania political observers. According to Politics PA, the Pennsylvania Game Commission in 2020 issued more than 887,000 hunting licenses to residents — more than any other state. In such a sportsman-dominated culture, both Oz and Republican Primary opponent Dave McCormick carried long guns prominently in ads showcasing their Second Amendment support to voters.

During an interview with Newsmax the same month, Oz discussed where he currently hunts. A host asked about a hunting ranch in Montana, and Oz corrected the questioner.

“Well, the hunting ranch is in Florida, but it’s nice,” he said. “I’ll invite you down.”

But if Oz ever hunted in Florida, he never obtained a license to do so. Tammy Sapp, a spokesperson for the Florida Fish and Wildlife Commission, confirmed the state holds no record of him ever holding a hunting license in the state.

That doesn’t mean the agency lacks any knowledge of Oz’s activities. He did hold a fishing license for three days in 2013. Notably, he listed Princeton, New Jersey as his home at the time, a significant snippet considering the media personality has been dogged about state residency since entering the race.

Whether Oz ever needed a hunting license depends largely on what he intended to shoot. Florida requires a license for any hunters who intend to take any fur-bearing animals or game birds with a gun or bow. That covers hunting for turkey, deer, ducks, geese, coots, moorhens, rails, snipes, woodcocks, mourning doves and white-winged doves. Licenses for such targets are required, whether taken from public or private land.

There are some exceptions. Florida residents over the age of 65 are exempt from requirements, but at age 62, that wouldn’t cover Oz even if he lived in Florida. Members of the Armed Services on leave for 30 days can also hunt without a license, but that’s also a category that won’t cover Oz.

But, importantly, Florida will allow people year-round to hunt wild hogs regardless of whether they hold a license, so long as they use a light with their gun. The state allows seasonal hog hunting on some publicly managed lands, and any time on private land so long as the owners grant permission.

In the week since Florida Politics first broke the story, Oz has not addressed the situation or returned requests for comment.

But Democrats in Pennsylvania took aim at Oz’s hunting claims. “Carpetbagging fraud Mehmet Oz has made it clear time and time again that he will lie about anything,” Pennsylvania Democratic Party spokesperson Jack Doyle said. “Pennsylvanians know they can’t trust this scam artist who isn’t even from here, and won’t be fooled by an out of touch TV millionaire who only cares about himself.”

Democratic opponent John Fetterman shared the Florida Politics story with his social media followers, quoting Oz’s claim of being a hunter his whole life and following that with a sarcastic response. “We totally believed you dude,” Fetterman tweeted.

The episode raises questions about Oz’s claim of owning a hunting ranch in Florida. The most notable home Oz claims in the state would be a Palm Beach County mansion. The Palm Beach Daily News in 2018 reported Oz was behind the purchase of the $18-million Louwana estate, and financial disclosures filed after Oz started his Senate race confirm his ownership through the Louwana Trust.

Oz’s wife, Lisa, has long had ties to the area through her family, the newspaper reported.

But that island home is no hunting ground. Located on a key east of West Palm Beach — incidentally on the same island as Mar-a-Lago — the only thing an owner would likely hunt at the estate would be prestige.

The only possible hint at where this hunting ranch could be located lies with Oz’s ownership of Emerald Oaks, a cattle farm just purchased in December.

Okeechobee County property records show Emerald Oaks owns three pieces of property, all in the unincorporated county, and listing an ownership address in Bryn Athyn, Pennsylvania. One of those appears to be a residential lot with a home on it in a neighborhood. Another has no address and appears to largely be pasture land.

Another property, though, does contain substantial, pristine wilderness. A large property on 128th Avenue is zoned as a rural estate, and records show a residence and mobile home on the property.

Bill Royce, planning director for Okeechobee County, said owners have not obtained permission to establish a commercial hunting camp. That would require a site plan approval through the county, and nobody has applied for such a use of the land.

Asked if the property owners could hunt on the land themselves, Royce said that’s likely: “I don’t see why not.”

But he stressed state laws still apply, and anyone hunting on the land must only take animals allowable for hunting. Licensing requirements remain in place. Royce did note a prevalence of hog hunting in the area.

previousLast Call for 7.18.22 — A prime-time read of what’s going down in Florida politics