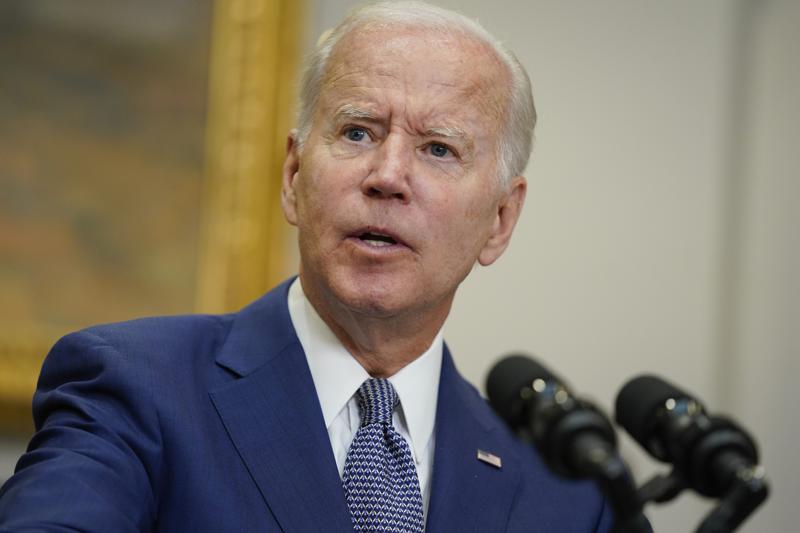 When it comes to the thorniest issues confronting his administration, the instinct from Biden and his White House is often to speak about what he cannot do.

On restoring access to abortion, President Joe Biden says his hands are tied without more Democratic senators. Declaring a public health emergency on the matter has downsides, his aides say. And as for gun violence, Biden has been clear about the limits of what he can do on his own.

“There’s a Constitution,” Biden said from the South Lawn in late May. “I can’t dictate this stuff.”

Throughout this century, presidents have often pushed aggressively to extend the boundaries of executive power. Biden talks more about its limits.

When it comes to the thorniest issues confronting his administration, the instinct from Biden and his White House is often to speak about what he cannot do, citing constraints imposed by the courts or insufficient support in a Congress controlled by his own party — though barely.

He injects a heavy dose of reality in speaking to an increasingly restive Democratic base, which has demanded action on issues such as abortion and voting rights before the the November elections.

But Biden’s realpolitik tendencies are colliding with an activist base agitating for a more aggressive party leader — both in tone and substance. Although candidate Biden sold himself as the person who best knew the ways of Washington, he nonetheless is hamstrung by the same obstacles that have bedeviled his predecessors.

“I think that if you hesitate from important actions like this just because of a legal challenge, then you would do nothing,” said Democratic Rep. Judy Chu of California, who has been pressing for more administrative actions on abortion. “People all across the country are expecting us — the leaders — to do something.”

Biden’s cautionary approach could be to protect himself if the White House falls short — like Democrats did in negotiating a party-line spending package centered on the social safety net and climate provisions. That sweeping effort had been steadily thwarted due to resistance from two moderate Democrats, one of them West Virginia Sen. Joe Manchin, who on Thursday scuttled for the time being a scaled-back effort that focused on climate and taxes.

That development prompted calls from Democratic senators for Biden to unilaterally declare a climate emergency. In a statement Friday while in Jeddah, Saudi Arabia, Biden pledged to take “strong executive action to meet this moment” on climate. But in recent weeks, that gap between “yes, we can” and “no, we can’t” has been most glaring on abortion.

Since the Supreme Court last month overturned the landmark Roe v. Wade ruling from 1973 with its constitutional protections for abortion, the White House has come under considerable pressure to try to maintain access to abortion in conservative states that are set to outlaw the procedure.

For instance, advocates have implored Biden to look into establishing abortion clinics on federal lands. They have asked the administration to help transport women seeking abortions to a state that offers the procedure. And Democratic lawmakers are pressing the White House to declare a public health emergency.

Without rejecting the ideas completely, White House aides have expressed skepticism about such requests. And even as he signed an executive order last week to begin addressing the issue, Biden had one clear, consistent message: that he could not do this on his own, shifting attention to the other end of Pennsylvania Avenue.

“The only way we can secure a woman’s right to choose and the balance that existed is for Congress to restore the protections of Roe v. Wade as federal law,” Biden said shortly after the court struck down Roe. “No executive action from the president can do that.”

Shortly after declaring that the filibuster — a Senate rule that requires 60 votes for most legislation to advance — should not apply for abortion and privacy measures, Biden acknowledged during a meeting with Democratic governors that his newfound position would not make a difference, at least not right away.

“The filibuster should not stand in the way of us being able to do that,” Biden said of writing the protections of Roe into federal law. “But right now, we don’t have the votes in the Senate to change the filibuster.”

Biden, who served for 36 years in the Senate, is an institutionalist to his core and has tried to operate under the constraints of those institutions — unlike his predecessor, Donald Trump, who repeatedly pushed the boundaries of executive power.

But some advocates don’t want to hear from Biden about what he can’t do.

Renee Bracey Sherman, founder and executive director of the group We Testify, which advocates for women who have had abortions, said the administration should proceed with a public health emergency even if it’s eventually blocked by the courts.

“It tells those people who need abortions that the president is trying to help them, and that the thing that’s stopping him is the court, not himself, or his own projections on what could possibly happen,” she said, later adding: “The fact that he’s an institutionalist and cannot look around and see the institutions around him are crumbling is the problem.”

Democratic lawmakers have also continued to prod senior administration officials behind the scenes. In a virtual meeting this past week, Chu urged Xavier Becerra, the health and human services secretary, to have the administration enact a public health emergency. Proponents of the idea say it would unlock certain powers and resources to not only expand access to abortion but to protect doctors who provide them.

Though Becerra did not rule out the idea, he told Chu and other members of the Congressional Progressive Caucus that the administration had two main questions: How would the administration replenish money for the public health emergency fund and what would this move actually accomplish?

The skepticism has not deterred Democratic lawmakers. But some of the most ardent proponents of expansive executive actions on abortion have similarly cautioned their voters and activists to be realistic.

“It’s unrealistic to think that they have the power and the authority to protect access to abortion services in every part of this country because of what the Supreme Court has done,” said Democratic Sen. Tina Smith of Minnesota.

In one sense, the recent success on guns was a validation of Biden’s art-of-the-possible approach, advocates say. Rather than promising what he could not achieve, Biden instead spoke of his limitations and cautioned that any substantive changes would require the support of at least 10 Senate Republicans — a goal that seemed implausible at the start.

That culminated this past week with a ceremony marking the signing of the first substantial gun restrictions into law in roughly three decades.

“I think that the president has struck the absolute right balance,” said John Feinblatt, the president of Everytown for Gun Safety.

Concerns about the limitations on Biden’s executive powers aren’t mere hypotheticals. His administration’s efforts to tame the coronavirus pandemic, for example, were repeatedly foiled by the courts, including a requirement to wear masks on mass transit and a vaccination mandate for companies with at least 100 workers.

Then-President Barack Obama sounded similar warnings when confronted by immigration activists urging him to use his power to issue a deportation reprieve for millions of young immigrants who did not have legal status in the U.S.

Obama in 2012 unilaterally enacted the Deferred Action for Childhood Arrivals program, which is still standing today. Two years later, Obama more fully embraced the pen-and-phone strategy, signaling to Congress that he would not hesitate to use executive orders if lawmakers continued to imperil his domestic agenda.

“Nobody thinks he’s got a magic wand here. Folks understand there are limitations,” said Leah Greenberg, co-founder and co-executive director of the Indivisible Project. “What they want to see is him treating this like the crisis it is for folks in red states losing access to abortion.”