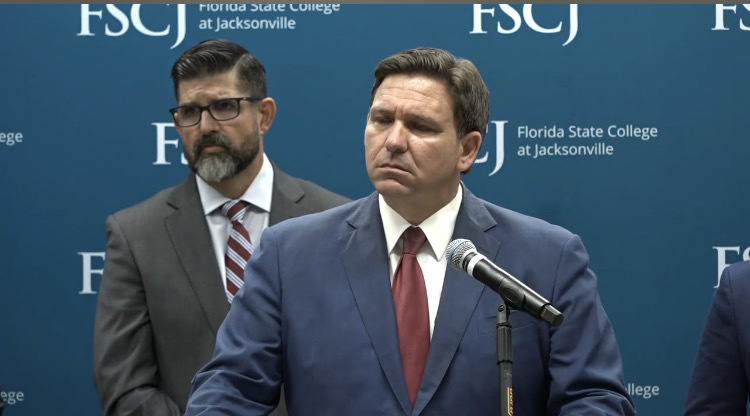 'If my name is being used to trick people, that is definitely wrong.'

In the wake of reports that candidate Erick Aguilar was removed from the Republican fundraising platform WinRed after revelations he had been appropriating the identities of national Republicans like Ron DeSantis in pursuit of small-dollar donations, DeSantis had his say Monday in Jacksonville.

“If my name is being used to trick people into providing donations for something that they don’t necessarily want to do, that is definitely wrong,” DeSantis said of the candidate in Florida’s 4th Congressional District.

The Governor made the comments Monday at Florida State College at Jacksonville, responding to Action News Jax reporter Jake Stofan asking if Aguilar should be kicked out of a debate next weekend.

“I haven’t seen those emails. I have heard about it. It is wrong, DeSantis said. To use his name and logo when the money is going to someone else, “that’s a fraud on the donor, and that is wrong.”

The Governor did not offer an opinion as to whether Aguilar should be banned from next weekend’s Sunshine Summit debate, but his words very clearly condemned the decision by Aguilar, a second-time candidate for Congress, to appropriate the identities of DeSantis, former President Donald Trump, and other name Republicans in donor pitches via the WinRed platform.

DeSantis also distanced himself from recurring donations via an “auto-donate” function.

“We do not do that auto because we do not want people to have those charges if that’s something they don’t agree with,” DeSantis said, claiming a television host somewhere said he did otherwise.

The seat, which replaces the minority access seat in the old Florida’s 5th Congressional District, is designed to perform Republican in a General Election. Sen. Aaron Bean and Aguilar are on the Primary ballot, along with health insurance contract analyst Jon Chuba.

A recent Primary poll by the Tyson Group conducted for the Republican Party of Florida showed three-fifths of voters were undecided, with Bean, the president pro tempore of the Florida Senate, getting 24% support and Aguilar 10 points back.

“Impersonating Gov. DeSantis and President Trump in fundraising emails is not only shameful and disgusting, but it is also fraud and should be investigated at the state and federal level,” Bean said.