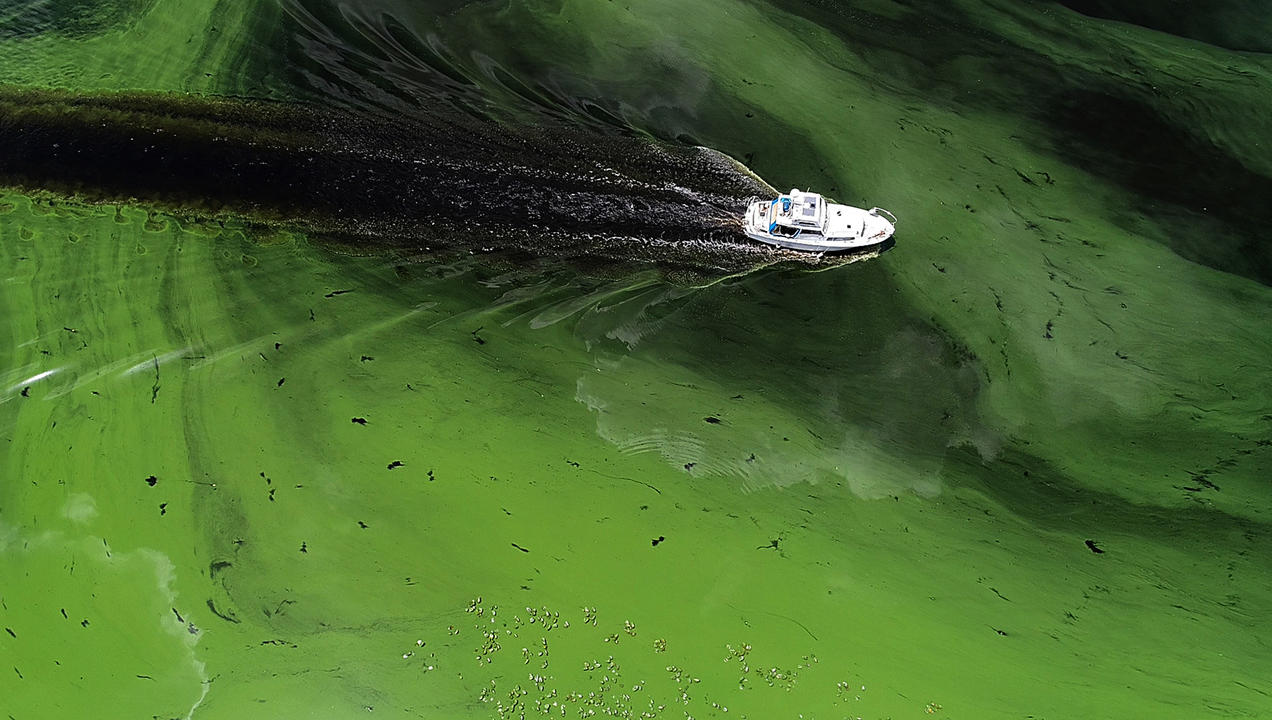 'I don’t think legislators are going to really endorse bigger sticks in this situation.'

When it comes to environmental protection and conservation, Florida government can end up on the side that posits it’s better to allow pollution, and try to do something about it on the back end, than prevent that pollution in the first place.

And that’s causing a serious problem getting a handle on the state’s algae bloom affliction.

Without political will to hold polluters accountable, people and organizations collaborating on dealing with blue-green algae proliferation — especially and including the state government — have to run through a series of next-best-thing ideas to put into effect.

Task Force members met with experts and the larger public to reframe the conversation on their challenges, and discuss project prioritization policies, at Florida Atlantic University’s Harbor Branch Oceanographic Institute.

“I think it’s easy for us to sometimes get trapped thinking that water-quality degradation is the challenge we’re facing, and I don’t think that’s right,” said Mark Rains, Chief Science Officer for the Florida Department of Environmental Protection (DEP). “Water-quality degradation is a symptom of another challenge we’re facing, which is land use/land coverage.”

It’s a wet state, and fitting 22 million people into it — in the size of the spaces they want — means shifting that water to other places, like large water bodies.

“There was a whole host of unintended consequences,” Rains said, which prompted “an environmental reckoning” in the 1960s.

Sixty years later, now that there is the knowledge to combat these structural water management and pollution issues, moving that knowledge into action has been slow, and even the concept of “clean water” takes into account the abuse it’s already handled.

“It’s important for us to keep in mind what we mean by ‘water quality restoration,’ because we’re not going back to the 1845 Florida, (though) I’m sure it was beautiful…,” Rains said. “But it’s not compatible with 22 million people and 135 million annual visitors.

“What we’re trying to do instead is build some of that original functionality into that modern landscape, and that’s difficult,” Rains added. “It’s difficult because we’re not exactly sure how to do it, from a scientific, policy and funding standpoint.”

Population and number of visitors keeps growing by large amounts, and combined with climate change, it’s changing the target. There’s also the cost.

“What you’re going to find, of course, is that a lot of this depends on funding,” Rains said. “None of this is free.”

Friends of the Everglades, 1000 Friends of Florida, Florida Conservation Voters, the Florida Springs Council, the Florida Waterkeepers and other conservation organizations collaborated on a “progress report” for the Task Force, which they released before the meeting. The report is meant to compare the state’s actions to recommendations in the Task Force’s 2019 consensus document.

“Key among those findings is that among the 32 metrics we tracked, only four have been implemented by the state of Florida in the three years you’ve been doing your work, so there’s a lot of progress yet to be made,” said Eve Samples, Executive Director of Friends of the Everglades.

“It’s important to note that in the (basin management action plan, or BMAP) category in particular — the topic at hand today — seven recommendations were made in the 2019 consensus document.”

Samples told Task Force members to keep up their work and impress upon Legislators the need to put these policies into action.

The Task Force also received plaudits from South Florida Water Management District Governing Board member Jacqui Thurlow-Lippisch. She thanked them for their time and effort in getting the panel to this point.

“When we were obliterated by toxic algae in our river, the St. Lucie, in 2013, 2016 — like a science-fiction movie — and also in 2018, it was like we were losing every single thing we loved,” Thurlow-Lippisch said. “Since that time, things have changed.

“Things aren’t perfect, but with Gov. (Ron) DeSantis’ help, and many others’ help, we are entering a new phase where we are learning and changing the way we’re dealing with our Florida waters.”

It’s the Legislature that “really drives the bus” on algae management, she added, and what’s suggested by the Task Force needs to be written into state law.