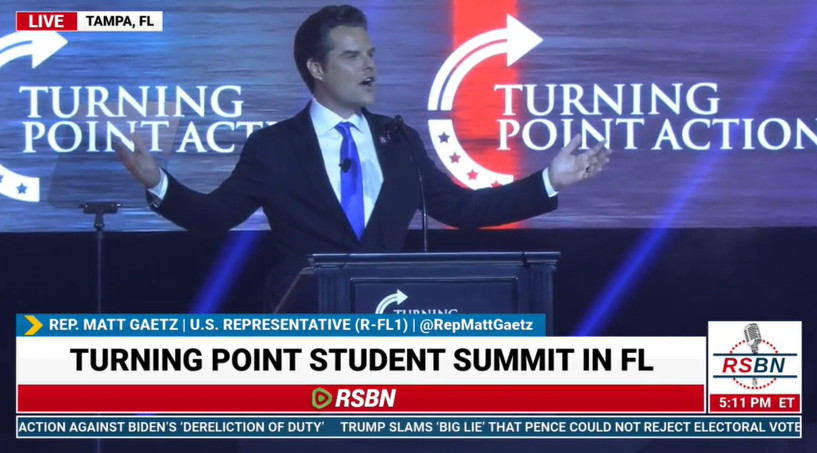 The Lombardo campaign has gone after Gaetz in a handful of TV spots over the summer.

Mark Lombardo is ramping up his assault on incumbent U.S. Rep. Matt Gaetz as the Marine Corps veteran and former FedEx executive attempts to unseat the controversial incumbent in Florida’s 1st Congressional District.

“Matt Gaetz is a hypocrite and nothing but a me-first, professional politician who entangled himself in a child sex-trafficking investigation and then sought a pardon for ‘any and all’ crimes to keep himself out of jail. It’s not surprising he used his campaign donors’ money to pay pedophile Jeffery Epstein’s attorney.”

The Gaetz campaign fired back: “Calling people ‘racist’ or ‘anti-gay’ who don’t agree with you is a tactic of the radical left. Mark Lombardo probably got that quote from his political backers at The Lincoln Project and HeadCount.”

Lombardo said that Gaetz’s newest ad contains lies and falsely links Lombardo “to a liberal special interest group” he says he has “no association with whatsoever.”

The Lombardo campaign has gone after Gaetz in a handful of TV spots over the summer, among them ads entitled “Crude,” “Lyin’ Eyes” and “Poor Decisions.”

The ads blast Gaetz for a wide range of issues, including missing 200 votes during his time in Congress, voting against an anti-sex slavery bill, and seeking pardons.

The controversial and polarizing Congressman came under fire weeks ago for comments he made calling pro-choice advocates “disgusting” while speaking at a Turning Point USA event.

“Why is it that women with the least likelihood of getting pregnant are the ones most worried about having abortions?” Gaetz said. “Nobody wants to impregnate you if you look like a thumb.”

After Texas teenager Olivia Julianna criticized his comments on Twitter, Gaetz received backlash when he posted a screenshot of the 19-year-old activist. The war of words galvanized Julianna and her followers to raise more than $2 million for reproductive health care.

The Lombardo campaign said an internal poll shows Lombardo up from 0% to 24% in four weeks. Lombardo, who entered the race in June, has vowed to reform Washington. He calls himself an “America-first conservative” and a “political outsider.”

Gaetz and Lombardo will go head-to-head in the Aug. 23 Primary Election after Republican Bryan Jones dropped out of the race.