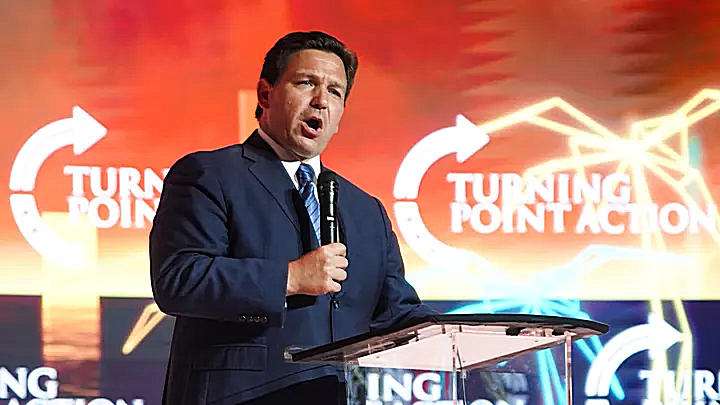 Masters and Lake, acolytes of Donald Trump, have questioned the legitimacy of the 2020 election, a fact that did not escape national observers.

However, there was little focus on stolen elections, with rhetoric tailored toward party unity. And by the end, DeSantis was promising to send National Guard members to stand guard at the Mexican border in cooperation with Lake, if she were elected Governor.

Lake, upon introducing DeSantis, didn’t focus on 2020 so much as extolling DeSantis as being in Trump’s mode and saying being called “DeSantis of the West” was a major compliment.

“He’s got BDE. I call it Big DeSantis Energy. He’s got the same kind of BDE President Trump has,” Lake said, introducing DeSantis as a Governor who brought “Trump strength” to Florida.

Florida will “get the election wave” started, with said wave going across the country and electing Lake and Masters, he predicted.

DeSantis urged for Arizonans, post-Primary, to “be united against the Democrats,” and said that the Republican Governors Association and the National Republican Senatorial Committee need to be “all in” for this election.

“Once areas go left, buckle your seat belt. It’s not going to be an easy ride. I don’t want to see that happen in Arizona,” DeSantis said.

“If you’re willing to put people at the border,” DeSantis said he told Lake, “I’m willing to send National Guard to help.”

From there, the Governor played the post-pandemic rhetorical greatest hits, from Faucian dystopia to the Free State of Florida and “the woke mind virus.”

The material rocked the crowd in Arizona as DeSantis extolled “the need for strong Governors.”

“What we did in Florida was we really led the nation,” DeSantis said, saying “international media” and “establishment Republicans” chided him for moves like opening beaches during the COVID-19 wave of summer 2020.

DeSantis also mocked President Joe Biden’s bouts with coronavirus: “How many times did he test positive for COVID?”

“Hopefully we don’t have a case of Long Biden,” DeSantis joked.

The zingers weren’t done for the President.

DeSantis stumping for Trump’s endorsed candidates comes as the former President is central to the news cycle. Trump continues to manage perception of the FBI search and retrieval of materials at Mar-a-Lago Trump purloined and took to Florida.

DeSantis went to bat for Trump over a half hour into the speech, claiming that agencies have been “weaponized” and Hillary Clinton wasn’t subject to such indignities “when she had a rogue server and she was laundering classified information.”

The Governor tweeted a denunciation of the search from his political account, rather than his official handle last week.

“The raid of MAL is another escalation in the weaponization of federal agencies against the Regime’s political opponents, while people like Hunter Biden get treated with kid gloves,” DeSantis wrote.

Polling has shown DeSantis as popular in Arizona, the first choice for the GOP nomination if Trump does not run in 2024. In the last year and a half, speculation has abounded about DeSantis potentially running against Trump, but here he seemed to be very much in a support role of the larger Trump agenda.

“Between begging billionaires for donations and campaigning for extremist candidates across the country, it’s clear that Ron DeSantis isn’t thinking about Florida right now. His only focus is his own ambition, even if it means leaving Floridians behind,” said Florida Democratic Party spokesperson Travis Reuther.