A political committee tied to Blaise Ingoglia is hammering the Hernando County School District over its handling of an employee arrest.

A mailer from the Government Gone Wild PAC scrutinizes a failure to notify parents of all the details when paraprofessional Dwaine Anton Francis was arrested in March 2021 at Suncoast Elementary School.

Ingoglia, a Spring Hill Republican, has long had a fractious relationship with the local School Board, and earlier this year criticized inclusion of sexually explicit books in district libraries.

The state Representative now is a front-runner for a state Senate seat, facing only Green Party opponent Brian Patrick Moore.

The piece shows inmate booking information from the Hernando County Detention Center showing charges of sexual battery and lewd and lascivious behavior against a victim under the age of 12.

The arrest made the local newspapers six days after Francis was taken into custody on school grounds, when parents were already complaining that little information had been shared by the school. The mailer hits on the same themes.

“School administration refused to tell parents that their children may have been around an alleged pedophile,” the mailer states. “During the pandemic, schools were quick to notify parents when a child came in contact with someone that was COVID-19 positive, but they don’t tell parents when a child may have been in contact with a sexual predator?”

“It’s time for parents and grandparents to stand up for what’s right!” the mailer states. “Our children and taxpayers deserve better.”

“We are aware of incorrect information being circulated through the mail to our parents and members of the community regarding the 2021 arrest of a paraprofessional at Suncoast Elementary,” a post on the district Facebook page states. “To ensure our parents and community have the facts of the matter, the following timeline includes information available through law enforcement and district public records.”

There, the district notes all criminal charges against Francis stemmed from incidents in Miami-Dade County. Francis had only recently started working in for the Hernando district, and a warrant for his arrest wasn’t issued until 20 days after a criminal background check came back clean. The district only learned of the charges on March 2, when law enforcement arrived at the school.

“That same day, the school principal delivered a phone message to all Suncoast parents notifying them of the arrest and to assure them that, at no time, was Francis alone with students,” the post states. Francis was fired the day of the arrest.

All notifications from the school, however, failed to disclose any of the charges brought against Francis at the time. Audio recordings of the principal’s phone message to parents reveal staff had been told they could not share information about the nature of the arrest.

“The incident related to the arrest is serious, but it does not involve any of our students and it did not take place on campus,” the principal stated. “There are few details I can share at this time but I can report that this individual has been with our school for only a short time and as of this afternoon has been terminated and will not return.”

Parents were encouraged to call the school if they had concerns but also told staff could not provide any further information.

But details were already publicly available about Francis’ charges already on the jail website at the time the call went out.

A Facebook post on Suncoast Elementary School’s page called it a “rumor” that the school did not inform parents of the arrest, and said allegations otherwise were “misinformation.”

That post also includes no information about the nature of the arrest or that a school employee faced charges of sexual battery on children. Indeed, the Facebook post from the school district pushing back on the political mailer appears to be the first open acknowledgment by school officials in more than a year that Francis was arrested on sexual battery charges.

Ingoglia said his issue has always been frustration about transparency and information being withheld from parents.

“It’s unfortunate that the Hernando County School District keeps trying to sweep their mismanagement problems under a rug at the expense of parents, students and taxpayers,” he said. “This is just the latest in a long line of examples of them not being open, honest and transparent. Now, they have resorted to purposely misleading people. Our parents and community deserve better”. 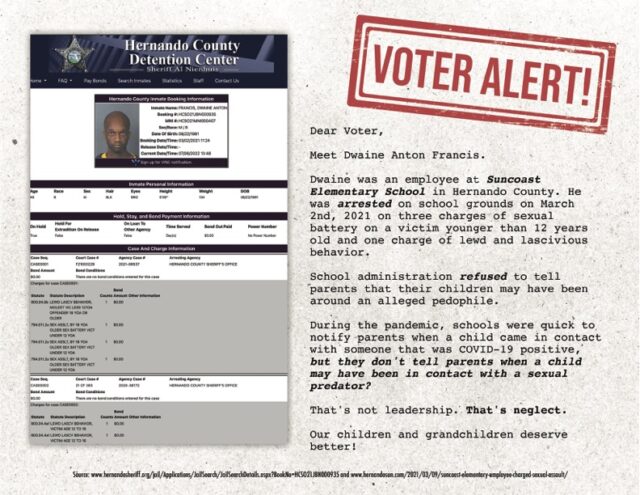 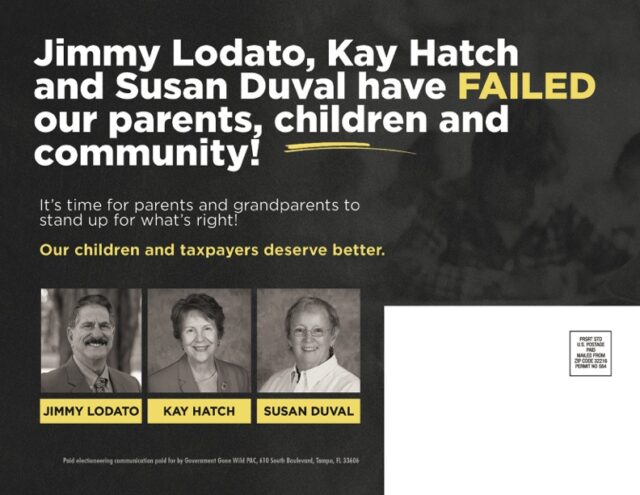