‘Gov. DeSantis has fallen to a new low, using families and children to gain political attention for his own ambitions.’

On Thursday afternoon, Fried’s Office announced she has formally requested that Garland look into DeSantis’ relocation Wednesday of 50 Colombian and Venezuelan migrants, some of them children.

“Gov. DeSantis has fallen to a new low, using families and children to gain political attention for his own ambitions. However, you may feel about our immigration situation, transporting 50 migrants across the country to a small town without notice shows a complete disregard for human life, and very well may be illegal,” she said in a statement.

Fried said in her letter to Garland that DeSantis’ “maneuver raises serious legal questions and will have untold repercussions on the individuals caught up in the Governor’s political stunt.”

“To use human beings as political pawns as Gov. DeSantis has done is morally reprehensible, meriting an immediate investigation and appropriate action by the Department of Justice on behalf of the impacted migrants,” she wrote. 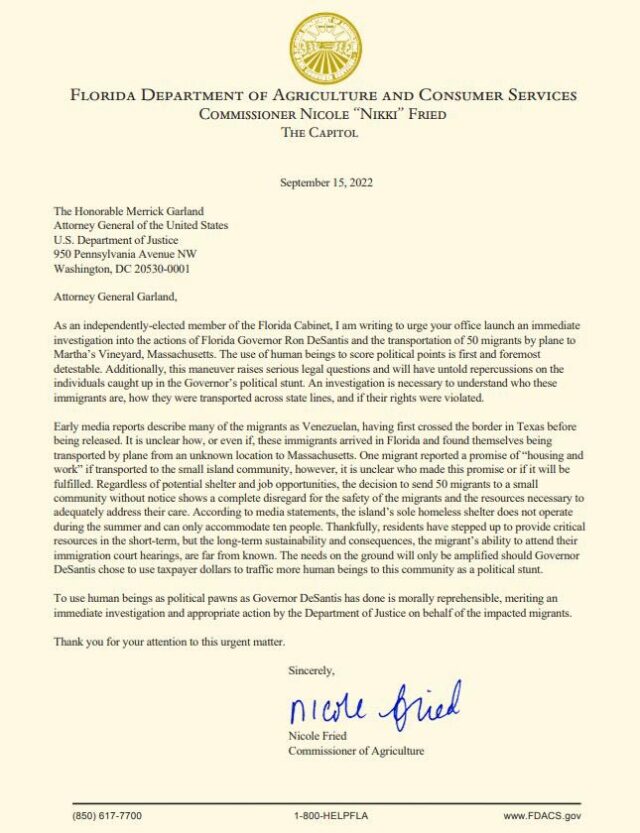 Fried is not alone in suggesting that by effectuating his relocation plan, whose funding comes from a $12 million budget earmark the Legislature OK’d earlier this year, DeSantis’ administration may have violated federal law.

California Gov. Gavin Newsom also sent a letter to Garland requesting an investigation into DeSantis. He argued the migrants were likely “targeted” based on their national origin, which could represent a violation of their equal protection rights under 42 U.S. Code Section 1985.

The intent, he said, “appears to have been to humiliate and dehumanize them.”

What @GovRonDeSantis and @GregAbbott_TX are doing isn’t clever, it’s cruel.

I’m formally requesting the DOJ begin an immediate investigation into these inhumane efforts to use kids as political pawns. pic.twitter.com/x2sBa06nSw

According to 8 U.S. Section 1324, it is unlawful if a person “knowing or in reckless disregard of the fact that an alien has come to, entered, or remains in the United States in violation of the law, transports, or moves … such alien within the United States by means of transportation.”

It is important to note that law pertains to an individual, not a government or government agency. Also of note, DeSantis’ office alleged President Joe Biden’s administration had flown more than 70 air charters with roughly 36 migrant passengers each from the Southwest border to Jacksonville International Airport through September 2021.

nextLast Call for 9.15.22 — A prime-time read of what’s going down in Florida politics