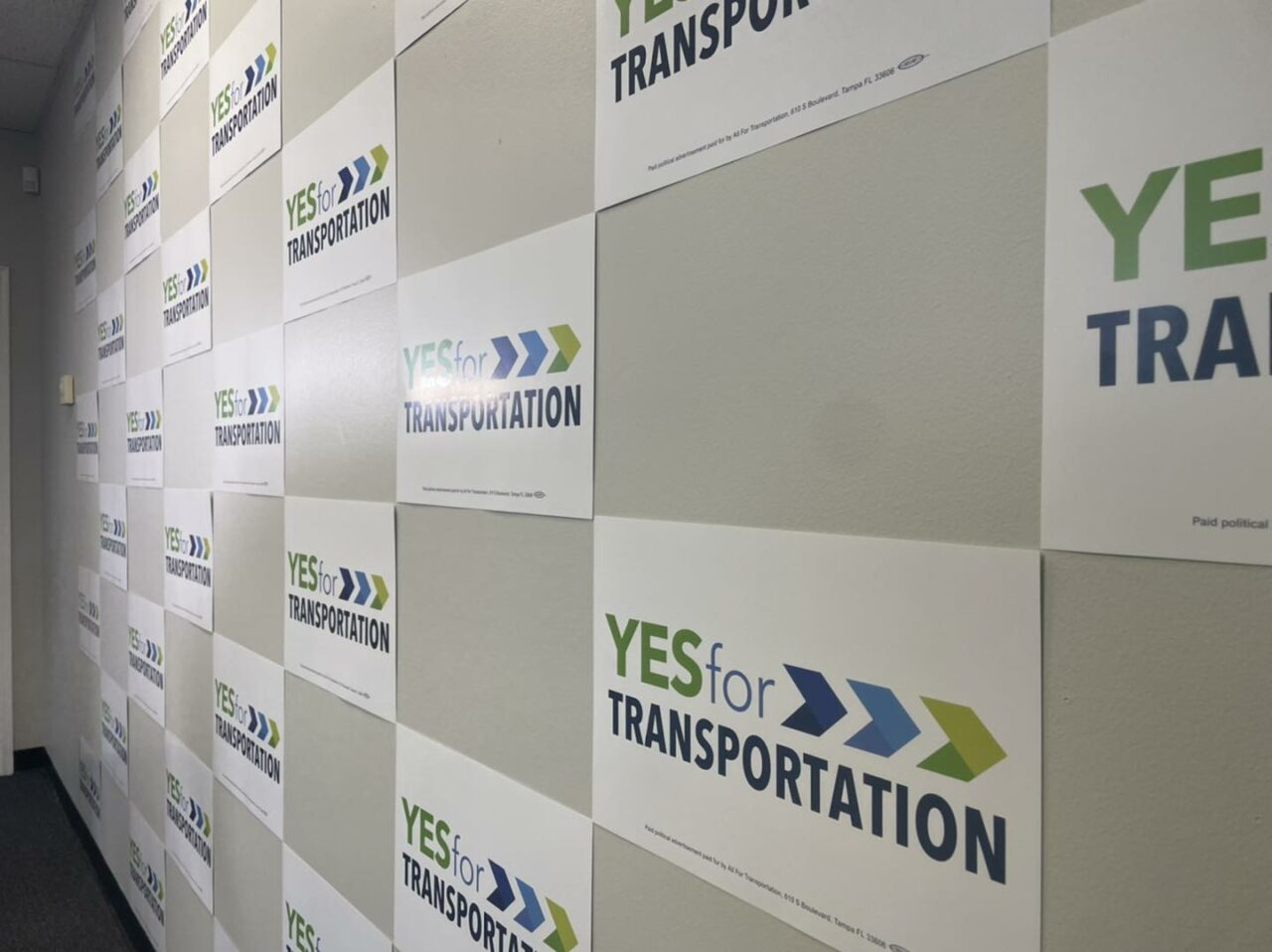 The resolution encourages voters to support the referendum.

The Tampa City Council on Thursday unanimously passed a resolution supporting the All For Transportation plan on the November 8 ballot.

New campaign signs show an update to this year’s campaign from the one it ran successfully four years ago, with the words “Yes For Transportation” emblazoned on yard signs, posters and T-shirts.

The approved Tampa City Council resolution provides a robust background on Hillsborough County’s pressing and growing transportation needs, including a $13 billion backlog of “road, safety and transit needs,” which are “growing by $1 billion a year, making the cost of doing nothing extraordinarily expensive and an increased burden on residents who need to travel safely” through the community.

The resolution also notes the county is “experiencing unprecedented growth with more than 700,000 people expected to move here in the next 30 years,” the lifetime of the proposed All For Transportation plan.

“Traffic congestion continues to increase, with the average time Tampa drivers spent stuck in traffic in 2021 hitting 48 hours and rising to the 12th worst congested city in the nation,” the resolution reads.

A staggering data point shows 44 people are killed in traffic accidents on Hillsborough County roads annually. The Tampa metro ranks in the Top 10 nationally as one of the most dangerous places to walk.

Meanwhile, the resolution also notes 80% of residents “would prefer to walk, bike or use transit rather than a car.”

“And yet we spend as much per capita on transit as Macon, Ga., and the city of Tampa only builds 1 mile of sidewalk per year, improves safe routes at 1 school per year and paves about 30 miles of roads per year while maintaining 2,477 lane miles,” the resolution reads.

Data shows the average Tampa metro commuter spends more than 53 hours a year sitting in traffic. Under current funding conditions, just 1% of roads are repaved each year, meaning existing roads are repaved just once every 70 years. The cost to repave a road sits at about $1 million per mile, a cost that can double when roads are not properly maintained. Under the All For Transportation plan, roads would be repaved every 20 years, reducing overall costs and improving road conditions.

Investment under the plan, according to All For Transportation, would create more than 350 miles of safety projects, fill more than 1,400 miles of missing sidewalks and reduce fatal and injury crashes by 35%. It supports 500 miles of new streetlight corridors on currently unlit roads, which contribute to nearly 40% of pedestrian deaths.

“Everyone will benefit from the All for Transportation Plan, which is a local funding source for local roads, safety, and transit projects throughout Hillsborough County and will provide the City of Tampa with $40 million per year to make badly needed improvements,” the resolution reads.

The Tampa City Council “strongly supports the All For Transportation plan and encourages all voters to cast ballots in favor of the plan on November 8, 2022.”

The All For Transportation referendum would levy a 1% sales tax on qualifying purchases, with carve-outs for household necessities such as medicine and food and a $5,000 cap on the tax’s per purchase applicability. If passed, it is expected to generate $342 million in revenue within its first year of collection.