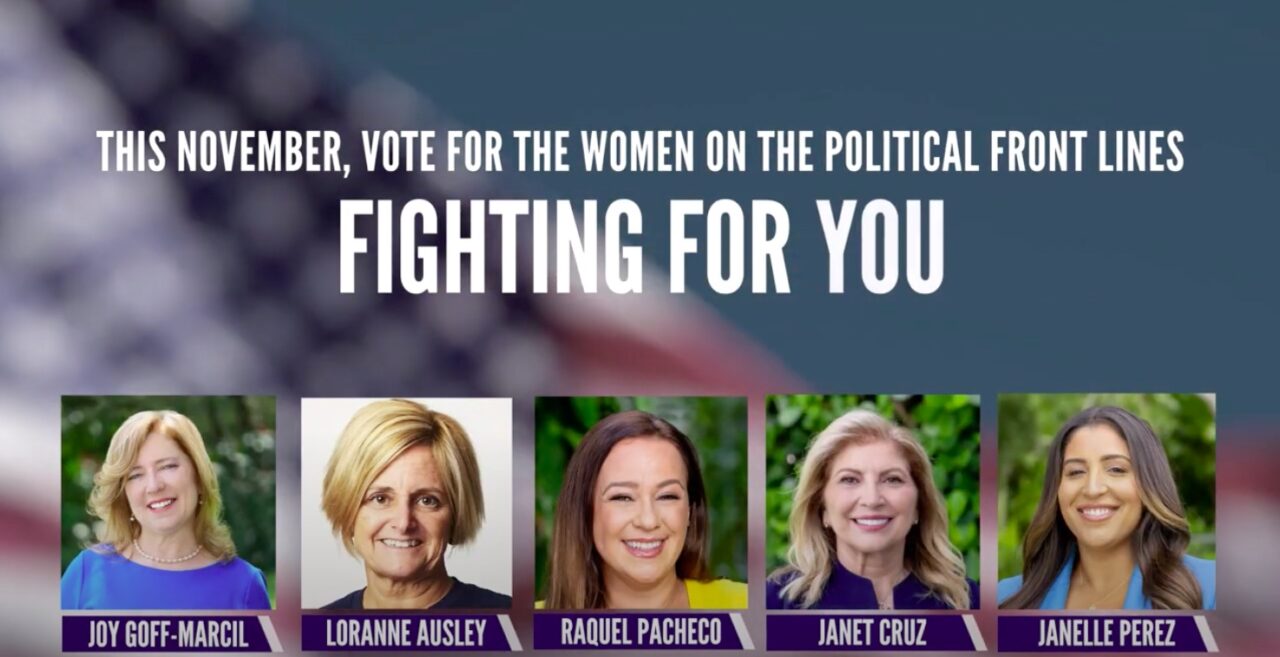 Republican Gov. Ron DeSantis claims to be the guardian of the “Free State of Florida,” but five fighting females — all Senate Democratic candidates — are taking him on for that title in a new pair of ads.

Against rousing orchestral music, Senate Leader Lauren Book explains why “This is our moment.”

“Radical Republicans are taking away our rights and personal freedoms,” Book says as images of President Donald Trump and DeSantis quickly flash by. “We must take action. On Nov. 8, we have the opportunity to elect five, incredible, pro-choice women.”

The Florida Democratic Legislative Campaign Committee paid for the ads to promote the Senate candidates whose districts span from Tallahassee to the Miami area. One version is 60 seconds long and the other, featuring the candidates themselves speaking, runs 105 seconds.

Spotlighting five female Senate candidates is one way to indicate where Democrats stand on the abortion issue, which appears to be energizing voters. The need for affordable health care, quality schools and election integrity also get mentions.

“This November, freedom is on the ballot,” Book’s narration continues, a subtle reminder that the state’s Republican-controlled Legislature could opt to make abortion completely illegal as other states have in the wake the court ruling that took away a 49-year-old right that the court ruling Roe v. Wade granted.

As Book speaks, the ads show the ways the Republican Governor has been grabbing the spotlight along with his picture. The Economist logo goes with the headline, “Why Florida is lurching to the right.” Click Orlando’s headline announces, “Businesses: Florida’s ‘Stop WOKE’ law violates speech rights.” The NBC logo, along with the Governor’s likeness is next to “Florida Gov. Ron DeSantis signs bill limiting LGBTQ instruction.” Finally, The Associated Press logo appears with the headline “Florida 15-week abortion ban reinstated after legal appeal.”

“Freedom to choose, freedom of speech, freedom to be treated equally,” Book continues. “We have five strong candidates ready to fight for us. … Vote for the women on the political front lines fighting for you.”

Each candidate takes a turn imparting how, though they might be female, they are fighters.

“We are resilient, but we are tough,” Cruz said. “We really are tough.”

Pacheco says,” As a veteran, I’m not afraid to take on tough fights, because that’s what service to our country needs.”

Perez, also, is primed for battle.

“I am ready to fight for our future, fight for a better tomorrow for our children,” Perez says in the longer ad. “Join me in this journey because together we can overcome the impossible.”