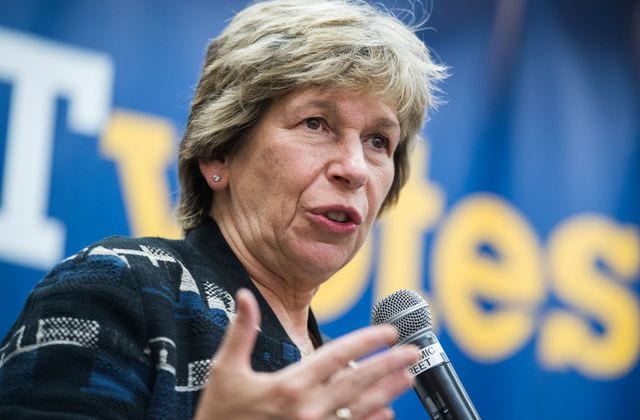 The Governor has said he's guarding against 'indoctrination' in the new laws regarding schools.

An SOS call went out for Florida schools — and Broward County schools in particular — as the President of one of the nation’s largest teachers unions Wednesday decried the state of Florida’s education under the leadership of Gov. Ron DeSantis.

DeSantis has smeared teachers and injected fear into the classroom, argued Randi Weingarten, President of the American Federation of Teachers (AFT). She was in Tamarac Wednesday appearing at a news conference with local teachers’ union leaders.

“Kids want to learn and we should be rolling up our sleeves to help them … not demagoguing and fearmongering about the people who really want to do their jobs,” said Weingarten, whose organization lays claim to 1.7 million members.

The Governor has said that legislation and other laws are aimed at stopping the indoctrination happening in public schools. And one of the Governor’s staff caused an outcry when she said that anyone who opposed the “anti-grooming,” parental rights law had ulterior motives.

That not true, Weingarten argued. Teachers go into the profession to help children learn, teach them empathy and teach them a love of books, she said.

“I’m going to stand here and talk about just how amazing my members are … in spite of the names they get called all the time,” Weingarten said. “Calling teachers pedophiles, calling teachers other names, saying they’re trying to change kids is disgusting.”

As of early August, the AFT had given Crist his largest donation in the race to date: $500,000. But Weingarten did not mention the Governor’s race at Tuesday’s event until she was asked.

The Democratic nominee for Governor, Charlie Crist, is opposing DeSantis’ bid for re-election, and he picked Karla Hernández, the leader of the Miami AFT local, as his running mate. Weingarten had high praise for Hernández.

“She knows how to bring people together and she knows how to call things out for what they are,” Weingarten said. “If they win, and I hope they do, education will be about education again, about meeting the needs of children again.”

And then her voice rose to a shout, “Not dividing people!”

Alex Lanfranconi, spokesman for the state Department of Education, said the union is the one spreading fear. He cited her recent, erroneous tweet that listed banned books in Florida.

“It is not Florida’s pro-parent policies that are discouraging teachers,” Franconi wrote in an email. “It is union-led disinformation and fear tactics that have a chilling effect on the education profession.

Weingarten praised the robotics program she had just seen at Dillard High School and the learning she saw going on there. Weingarten said the Governor’s recent action removing elected Broward County School Board members from their posts should send a strong message to voters.

DeSantis followed the recommendations of a grand jury charged with investigating the aftermath of the shooting at Parkland when he removed four current members. As part of the inquiry into the shooting, the grand jury looked at the School Board’s multiyear delay in spending an $800 million construction bond.

The grand jury found that five members had “engaged in acts of incompetence and neglect of duty” in the lackadaisical oversight of the aging facilities’ renovations.

“It’s inconceivable that Randi Weingarten would travel to Florida and attempt to politicize the results of the findings of an independent grand jury formed in the wake of the Marjory Stoneman Douglas tragedy,” Bryan Griffin, a spokesman for the Governor, wrote in an email. “That she would insert herself and make these statements is a slap in the face to a community who is seeking justice.”

Antonio White, an officer with the Miami-Dade local of the union, said that public education is one thing that shouldn’t be politicized — but it’s on the ballot in a big way for this election, he said.

“It has become the number one political punching bag,” he said.