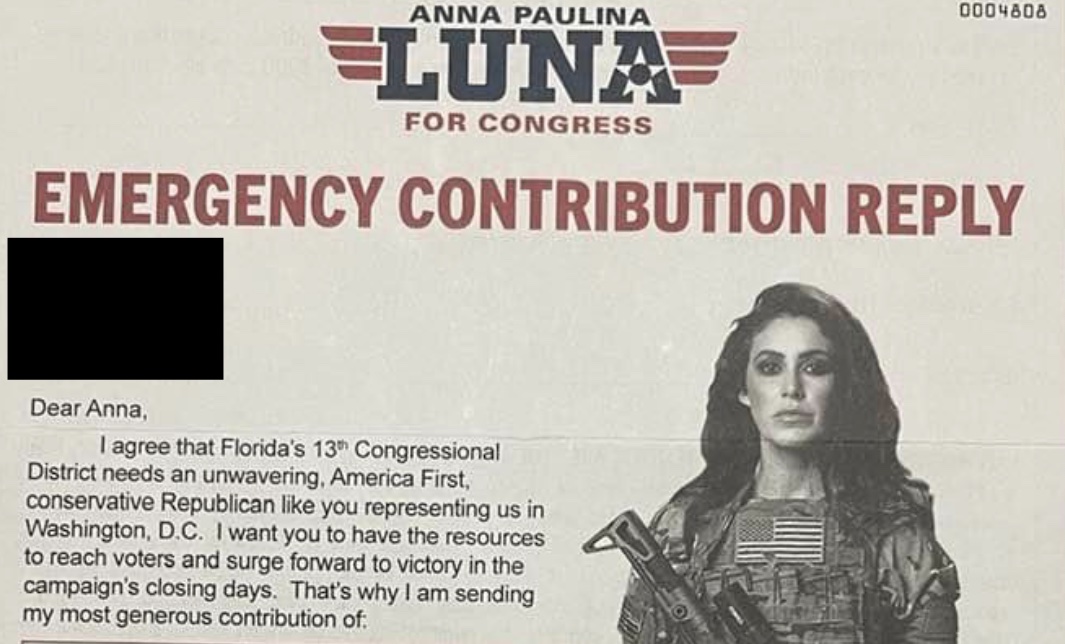 Hurricane Ian left Gulf Coast residents asking for water, electricity and places to shower. But at least one congressional candidate is asking for “emergency” campaign donations.

A new mailer from Anna Paulina Luna, headlined as an “emergency contribution reply,” shows the Pinellas Republican in military fatigues and asks for donations. But it wants checks written to “Anna Paulina Luna for Congress,” not any type of relief organization. It’s been greeted by some as deceptive, or, at the least, tasteless, when voters in Florida’s 13th Congressional District still reel from the storm.

“I came home tonight to this in my mailbox. Are you kidding me?” wrote Belleair Bluffs voter Jan Macdonald Whitlow on Facebook. “APL THE EMERGENCY UPON US TODAY IN SW FLORIDA WHERE IAN HIT … YOU ARE CLUELESS. I find this in extremely poor taste.”

For its part, Luna’s campaign said this is chiefly a matter of bad timing.

“These fundraising mailers were ordered and scheduled weeks ago,” said Luna consultant James Blair. “They are scheduled very far in advance. The delivery timing by this particular contractor is unfortunate.”

Blair said Luna, in fact, has focused on helping with storm recovery since Ian made landfall in the state on Sept. 27. A glance at her Twitter feed shows she has posted fundraising appeals for Cajun Navy, a disaster relief fund, and has also participated in a supply drive for the organization. She has also announced endorsements and attended community events like National Night Out.

“Anna has been very focused on helping recovery efforts since the storm,” Blair said.

The controversial mailer doesn’t explicitly mention storm recovery, and the text bears a political message. It has a letter the mailer suggests to send to Luna, stating that CD 13 “needs an unwavering, America First, conservative Republican like you representing us in Washington.” The mailer then suggests donations of $50, $100, $250 of $2,900, the maximum legal donation to a campaign. A space is available to provide credit card information for a contribution.

Luna faces Democrat Eric Lynn in one of Florida’s most competitive congressional races this cycle.

previousCandidates for CD 23 offer differing points of emphasis at forum