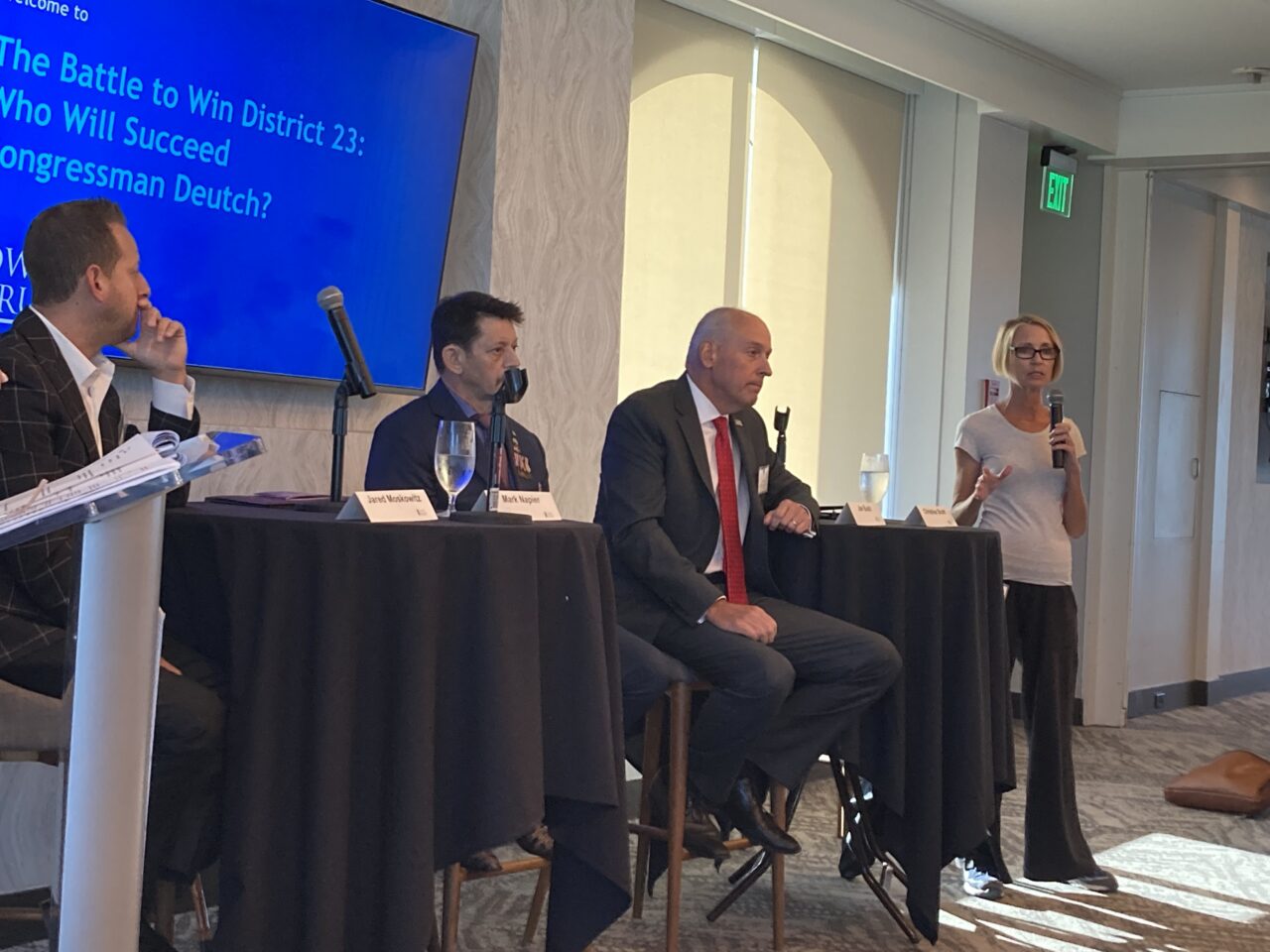 About 136 miles from where Hurricane Ian made landfall, the storm loomed large over a Thursday forum that brought together four candidates vying to represent South Florida in Congress.

Democratic nominee Jared Moskowitz, the Republican nominee Joe Budd, and two candidates with no party affiliation — Mark Napier, a military veteran, and Christine Scott, a small businesswoman — came before about 80 of the area’s movers and shakers at a Tower Forum breakfast to discuss November’s election.

They are competing to succeed U.S. Rep. Ted Deutch, representing a district that spans Broward and Palm Beach counties.

Budd said that the best thing that President Joe Biden has done so far was land in Fort Myers as he did Wednesday to comfort the victims of the Category Four storm. And Moskowitz lamented that moments of unity like this didn’t happen more often.

“It shouldn’t take a hurricane for us all to realize that we’re Floridians and that we’re all Americans,” said Moskowitz, who was first elected at age 25 and has since served at numerous levels of government. “Only when there’s a national emergency do we see our leaders being able to sit together and take photos together.”

The campaigns’ different points of emphasis came immediately into focus — as did the crowd’s enthusiasm for the candidates. Moskowitz is heavily favored to win the seat, as Florida’s 23rd Congressional District, that stretches from Boca Raton to Fort Lauderdale, favored Biden in the last election by a significant margin.

Asked to name his priorities, Moskowitz’s statements about preserving democracy in the face of those denying Biden’s election and a woman’s right to choose regarding abortion were greeted with applause that no other candidate received while speaking.

“I’ve got two young kids and … I don’t know what kind of country they’re going to inherit,” Moskowitz said.

Budd, who won the Republican Party’s nomination for the same seat in 2010 but ultimately lost to Deutch, said his first priority is addressing the economy, and blamed a large part of its struggles on the Biden administration’s action that restricted oil and gas drilling leases.

“We are causing an economic decline in this country, infinitely affecting inflation,” Budd said, also naming housing and insurance as his other two main priorities.

Moskowitz spent some of his speaking time making the case that a national catastrophe fund needs to be started. He noted that the frequency of severe storms hitting land is increasing. Also, he said, more investment needs to be made in shoring up seawalls and other infrastructure to handle the coming deluge.

“We need a national catastrophic fund so we can amortize these disasters, so we can also stabilize the economy. And quite frankly, with part of that fund, we have to stabilize the insurance market,” Moskowitz said.

Budd offered a wholly different perspective, arguing that perhaps the state’s current surplus should be used to shore up the state’s current property insurance crisis, rather than appeal to a national solution. He also pointed out scientists have been wrong about climate change before, although he believes it’s really happening.

“On April 28, 1974, the cover of Newsweek magazine had an article about global cooling — all the scientists were afraid things were going to freeze,” he said. “Climate change is real, it does happen. It goes back and forth.”

Most importantly, though, government efforts on this score have been a failure, Budd said.

“Over the last 20 years, the U.S. government has spent $5.5 trillion against the fossil fuel industry in hopes of solving the climate change issue,” he said, saying that, in that time, dependence on fossil fuel has only dropped by 2%.

Scott said she would bring to Congress more awareness about how humans can control weather.

Budd wrapped up his comments saying that he wished Moskowitz would debate him directly on TV, as a local station has offered to host them.

“WPBF Channel 25 is trying to organize a debate — I encourage my opponent to accept that debate,” he said.

Moskowitz, however, said that he doesn’t want to elevate Budd’s view of who won the last election.

“We should not be rewarding inflammatory rhetoric and dangerous disinformation,” Moskowitz said.

Budd is the founder of the Club 45 USA, which aims to “keep Donald Trump supporters in our area connected and engaged and to support the current and future endeavors of Donald Trump and the re-election of Governor Ron DeSantis,” according to its website. But Thursday, Budd said he recognizes Biden is the country’s legitimate President.

“I’m not an election denier,” he said. “Nowhere can you find that in my history.”