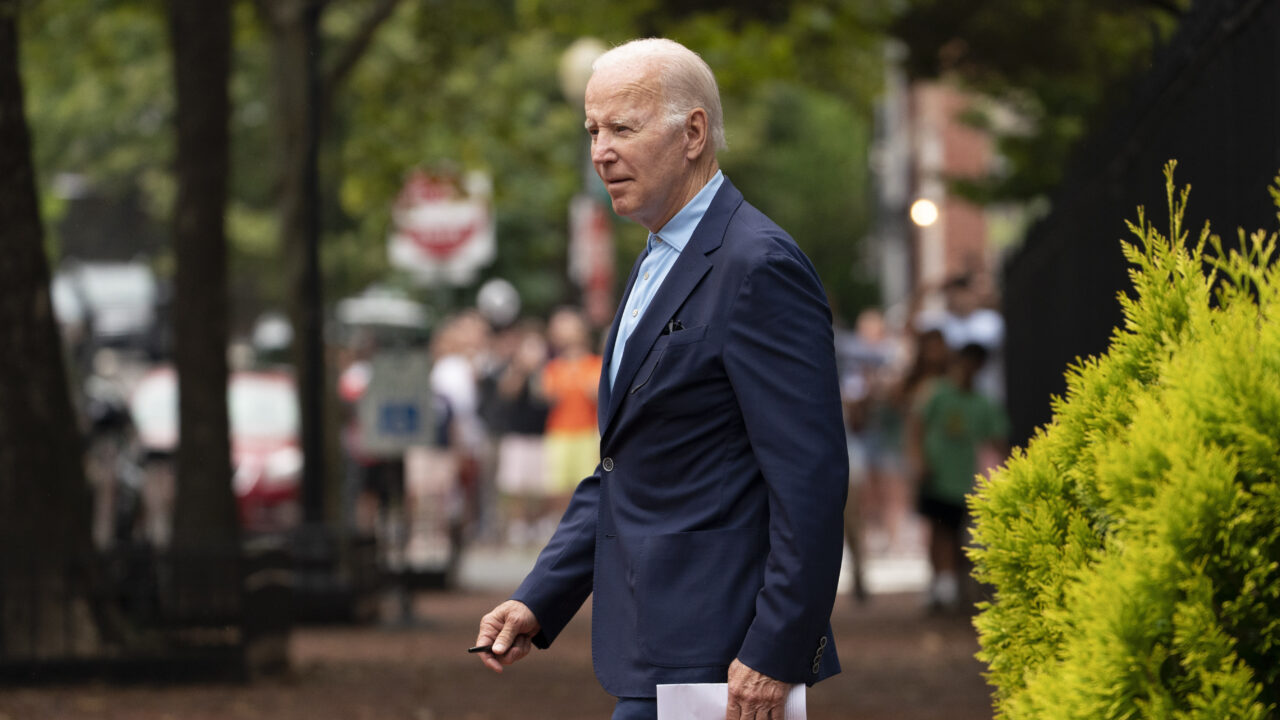 Fourteen U.S. House seats are held by Republicans but go to Biden under new maps.

While preparing to march in a Saturday morning parade through this fast-growing city’s westside, Democratic congressional candidate Hillary Scholten warned her staff that the area was traditionally very conservative and they should brace for possible booing.

But the crowd lining Fulton Street to mark the region’s Polish pride was friendly. Only one man bellowed what sounded to the candidate like “Go to hell, Hillary!” as she passed. But he also grinned and flashed a thumbs-up later.

It’s been 32 years since a Democrat won the House seat where Scholten is competing against Republican John Gibbs. But, its largest city, Grand Rapids, has turned steadily bluer lately, and redrawn congressional maps have converted it from a district that backed Donald Trump for president in 2020 to one that Joe Biden would have carried instead.

It’s one of 14 U.S. House seats nationwide that are held by Republicans but that Biden would have won under new maps.

As Democrats brace for midterm defeats that could erase their narrow, five-seat control of the House, a chance to limit the damage may lie in flipping Republican-held seats that voted for Biden to stanch the effect of losses elsewhere around the country.

Scholten, a former Justice Department attorney and Christian Reform Church deacon, lost the seat to Republican Rep. Peter Meijer in 2020. But Meijer was defeated in his Michigan GOP primary this year by Trump-backed challenger Gibbs, a former software engineer who falsely purports that the 2020 presidential election was stolen.

Scholten is trying to become the first Democratic woman elected to the House from western Michigan and isn’t counting on more favorable boundaries to get her there, noting that it’s “hard for people to believe in what they’ve never seen before, and we feel that every day.”

But even Gibbs concedes the new maps have Democrats excited.

“In a year where they’re expected to have a very difficult time in the midterms,” he said, “for them, a pickup is something that they’re salivating over.”

The list of GOP-held Biden districts feature three Los Angeles-area seats and one in California’s Central Valley. Others are the territories of Republican Reps. Don Bacon in Omaha, Nebraska, and Steve Chabot in Cincinnati. Pennsylvania Republican Rep. Brian Fitzpatrick, who represents the moderate swing battleground of Bucks County, north of Philadelphia, faces a similar test. On the other side are a dozen districts that voted for Trump but are held by Democrats. Retirements and redistricting mean many no longer have incumbents running.

Still, Democrats see high stakes in their efforts to flip seats won by Biden. When House Majority Leader Steny Hoyer recently predicted that his party would hold the chamber, he mentioned such territory in California and Illinois, as well as Bacon’s and Chabot’s districts, and the Grand Rapids race.

Not every incumbent is sweating toss-up races. Chabot says that, during his 26 years running for reelection in southwestern Ohio, he’s “had more challenging races, for sure, than anyone in the House.” But, as he competes for potential crossover voters, Chabot is not emphasizing Trump.

“I agree with most of his policies, but I’m running on my own record,” Chabot said. “People can make up their own minds.”

Gibbs says that, despite Trump’s endorsement, he’s building appeal among independents and swing voters. He recalled one man approaching him in the lakefront city of Muskegon, northwest of Grand Rapids, and saying: “I voted for you. I’m a Democrat. Is that OK?”

“This race is not so much about Democrat vs. Republican. It’s more crazy vs. normal,” said Gibbs, pointing to high gas and food prices and ”what they’re trying to do to kids in school,” with modern curriculums and inappropriate material in campus libraries being especially outlandish.

But, echoing Trump, Gibbs left open the possibility that he may object to the results of his own election next month.

“If it’s fair and everything’s on the up and up, I’ll accept whatever the result is,” he said. But asked if he could define fair, Gibbs replied, “Not at this point.”

“We’ll just have to kind of see how it goes,” he said.

A Scholten win would cement this area’s political transformation from red to blue. Booms in health, university and technology jobs are attracting scores of college-educated workers — with new residents often importing Democratic voting preferences. Grand Rapids and its suburbs have also turned more diverse, including notable increases in Hispanic voters.

Such a change was long unthinkable in the home city of Gerald Ford and former Trump administration Education Secretary Betsy DeVos, which once epitomized pro-business, country club conservativism.

Despite Democrat-friendly lines, national Republicans see the district as a “checks and balances” area where voters might have shunned Trump but want to control Washington’s spending and potential federal overreach.

Meijer was one of 10 House Republicans who voted to impeach Trump, prompting the former president to endorse Gibbs. The Democratic House campaign committee even financed a GOP primary ad proclaiming that Gibbs was “hand-picked by Trump to run for Congress,” believing he’d be beatable in November.

Trump once nominated Gibbs to head the Office of Personnel Management, but he wasn’t confirmed amid questions about past tweets, including one from 2016 in which Gibbs wrote, “Today’s Dem party: Islam, gender-bending, anti-police, ‘u racist!’”

Gibbs says Democrats have posted far more incendiary things. “I don’t apologize. I never have and will not,” he said.

Democrats hope that a question on Michigan’s ballot asking voters to put the right to an abortion in the state constitution energizes their base.

“The issue of choice is front and center in a way that it wasn’t before,” Scholten said. “It’s changed a lot of minds.”

Gibbs counters that his steadfast opposition to abortion is a winner. He’d only allow exceptions if a pregnant woman’s life is endangered. In instances of rape or incest, Gibbs said: “That baby, born in that case, is innocent. So I don’t see why an innocent person should have to perish.”

Raised in the Pentecostal church, Gibbs spent seven years as a missionary in Japan. But he converted to Catholicism in 2021 and now tries to go to Mass multiple times per week.

He has that in common with Biden, who is also a devout Catholic, though Gibbs isn’t seeking bipartisanship there. He retorted of the president’s frequent Mass attendance, “Yeah, I just wish he would accept the teachings.”

“If I ever saw him at Mass, I’d have a nice, frank conversation,” Gibbs said. “Give him a copy of the Catechism of the Catholic Church: ‘You oughta learn this.’”