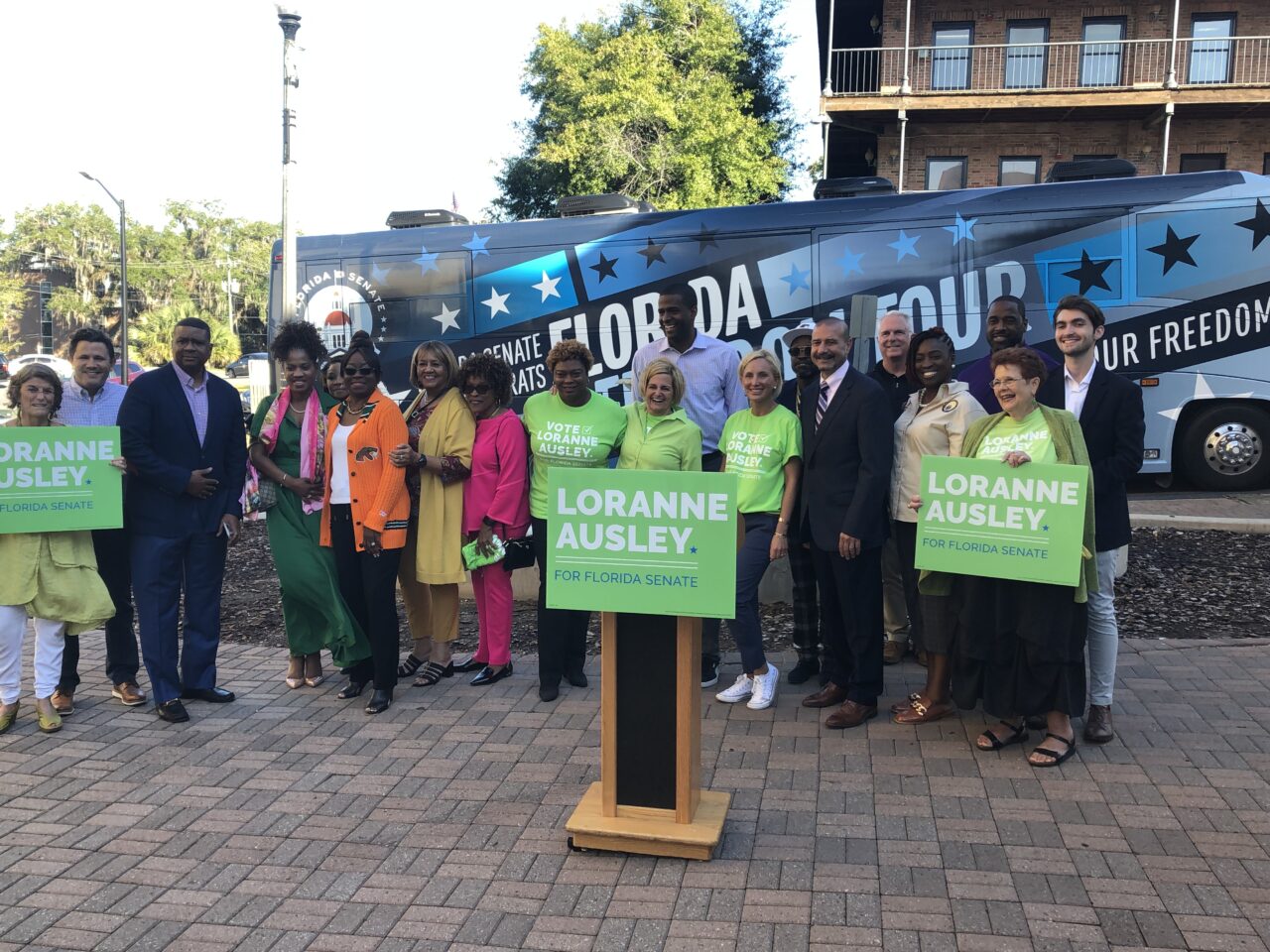 Senate Democrats are making their maiden voyage bus tour as they fight to retain some semblance of power.

Senate Democrats are running all over hell’s half acre on a bus tour across North Florida as the caucus hopes to keep Sen. Loranne Ausley for a second term.

Departing from Tallahassee on their five-day bus tour of SD 3’s 13 counties, Democrats — under the banner of Senate Victory, the caucus’ campaign arm — touted the field trip as their first-ever bus tour.

But Democrats aren’t spinning their wheels across North Florida because they’re living in high cotton. Ausley is at risk of losing her seat to former Florida State University football star Corey Simon, whose potential triumph two weeks from now could hand Republicans a supermajority in the Senate.

“We’re getting dangerously close to losing ground, so it is all hands on deck,” Pizzo told reporters Wednesday.

If Republicans gain just one more seat in the Senate, they will be able to advance constitutional amendments without support from Democrats. If they gain two seats, that gives them additional power, including the ability to pass last-minute amendments on the Senate Floor.

Ausley said Democrats would help keep the balance of power if they maintained their minority share.

“I spend a lot of time crisscrossing this district, and no matter Republican or Democrat, most people want balance,” she said. “Historically, the state Senate has been a backstop to some of these extreme measures, and without the numbers that we need, that will not continue.”

Ausley also noted that four sitting or likely Senators (Book, Pizzo, Ausley and Rep. Tracie Davis — who faces a cakewalk General Election) will take part in the tour, creating a strong Democratic contingent to show their faces in counties like Franklin, Gadsden and Gulf counties. The Senators call it an opportunity to meet with voters who don’t typically receive political visits from their state lawmakers.

Sellers is a political commentator and former South Carolina state Representative who rose to prominence when he became the youngest elected African American official in the country at the age of 22 in 2006. On Tuesday, he was stumping in Georgia, where Democrats are fighting to retain control of the U.S. Senate. But the down-ballot races are critically important, he told Florida reporters Wednesday.

“For far too long, we have not paid attention to the voters that matter. We have taken them for granted,” Sellers said. “But these Florida Senate Democrats are so impressive because they’re going on this bus, they’re meeting voters where they are, they’re not taking people for granted.”

“If we can win here, then we can shock the world,” he added.

Republicans have pushed against “critical race theory” and LGBTQ issues in schools. But Hanna highlighted the shift Republicans have been making from public schools to private schools, which he said may be out of reach for some students and families. He also invoked Sen. Bill Montford, the former Senator and principal who held Ausley’s seat before her.

“We can’t lose Loranne in the Senate. We simply cannot,” Hanna said. “She’s replaced Senator Montford, who was the voice for public education, and now Loranne has taken up that mantle.”

Other policy priorities for the Senators included property insurance and utilities. Sellers added prescription drug costs and abortion to the list.

“This is about deciding whether or not you want Corey Simon deciding what your wife or daughter is going to do with her body,” Sellers said.

In a district that grew more rural following this year’s redistricting process, Democrats’ efforts might not amount to a hill of beans.

With the district’s expansion into a total of 13 counties, geographically the largest in the state, it grew from a seat that voted for President Joe Biden by 9 percentage points in 2020 into one he would have carried by only 3 points. That, plus Ausley’s underperformance as compared to Biden that cycle and the recent reversal of Democrats’ fortunes in the polls, puts Ausley’s seat on the line.

Republicans are also digging deep in North Florida. In support of Simon, the Florida Republican Senatorial Campaign Committee launched an ad Wednesday to coincide with the bus tour they’re calling the “B.S. Express.”

The ad, called “Don’t Be Fooled,” calls Ausley extreme. It also mocks her for protesting the bill limiting discussions on sexual orientation and gender identity in classrooms — dubbed the “Don’t Say Gay” bill by critics — and claims she supports taxpayer-funded sex-change operations for minors and “transgender men” competing in women’s sports.

Simon was an All-American during FSU’s championship season in 1999. He also played in the National Football League and has since been a community volunteer and CEO of Volunteer Florida.