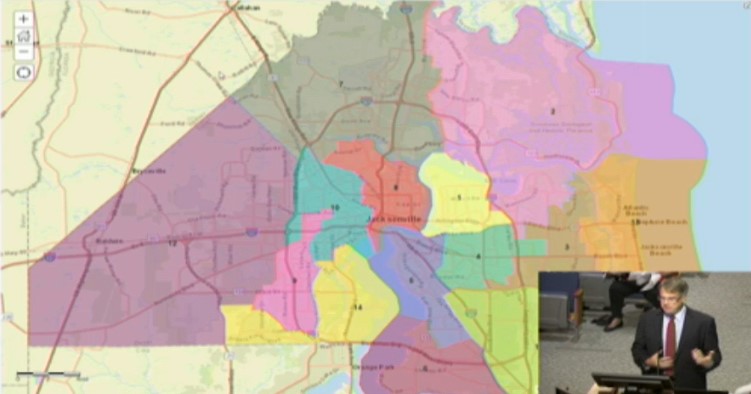 The Jacksonville City Council’s second attempt at redistricting is continuing, with a special committee finalizing on Wednesday the touches on a remedial map ahead of a court deadline next week — but not without controversy.

After federal Judge Marcia Morales Howard ruled the map defective because race governed its lines, the Council moved to produce an alternative product even while appealing Howard’s ruling. Howard compounded her ruling Tuesday, denying a stay motion from city lawyers.

The Council is not considering a Voting Rights Act-compliant approach, claiming it doesn’t have time, even as the plaintiffs that challenged the map passed earlier this year provided one.

They also rejected on Tuesday an alternate map proposed by the plaintiffs, moving instead for consideration two maps drawn by its contracted redistricting expert.

The maroon map was the preference of committee members in Tuesday’s meeting. It creates in its pre-meeting form five districts with Democratic advantages, four of those with 50% or more Democrats, and one (District 14) split evenly between Democrats and Republicans in registration. The remaining districts would see Republican plurality advantages. The maroon map also protects incumbents.

The “lime” map also advanced to Wednesday for further consideration as a seeming second choice, but the maroon map is the clear template going forward, which will see changes to the map before Thursday’s final committee meeting.

Council President Terrance Freeman defended on Wednesday the winnowing out of other maps, saying the plaintiff’s map and the rejected “orange” map from the city consultant failed to consider incumbents and didn’t reflect the politics of the city at large.

That map would split up the Riverside-Avondale historic district, a move which outgoing Council member Randy Defoor is on the record objecting, but to no apparent avail.

“None of those maps reflect real-life human beings,” said Defoor on Wednesday, objecting to Riverside and Avondale being split in a partitioning of “District 14 where my family has lived for five generations.”

Defoor, not on the committee, urged the committee again to consider neighborhoods, while Freeman cited the “short runway” the Council has to produce a map by way of sidestepping her request. Numerous members of the public from Avondale backed Defoor’s position in public comment.

Committee member Rory Diamond urged consideration of adding Riverside/Avondale to 8, 10, or 14, asking the redistricting consultant to weigh those scenarios.

Districts 8 and 10 are both currently Democratic vote sinks and would be under the new map, while 14 (which included the area through the most recent map) would be a swing district.

Council VP Ron Salem urged inclusion of Murray Hill in the Riverside/Avondale district, and that will be considered as well, suggesting major changes could be ahead in that part of the map.

While some things will change, others will remain the same.

General Counsel Jason Teal stressed again that there was “not enough time” for a VRA-compliant analysis that can be defended in court, defending the “population-based method” of cartography used on these maps, and noting that this process is independent of the court itself.

Teal would offer further assurances later on, saying it was “OK to have funny-looking districts” and “weirdly shaped districts” as long as “we can say why it looks weird.”

Redistricting consultant Douglas Johnson said people could nonetheless send in shape files and other suggestions to the city “to be officially considered.” A thumb drive could be used, he suggested.

Indeed, other amendments were approved, including an amendment from Ju’Coby Pittman that would reshape District 8 to include her house and points north yet again.

The committee has one more meeting Thursday, followed by a town hall Thursday evening, and then a full Council meeting Friday where the map could be voted up.

But there wouldn’t be time Friday, noted Johnson, for “brand new ideas” that late in the process, kneecapping any hope of wholesale review by Council members not on the committee.

For a second straight day, the process was not warmly received by the public. Ayesha Covington, a plaintiff in the suit that spiked the previous map, ripped up paper copies of the maroon and lime maps in her allotted minute for comment.

“I hope you got the visual,” Covington said, urging the Council to work with plaintiffs, which doesn’t seem likely in this process.

Not all Council members are thrilled either.

See the ‘maroon map’ and the party breakdown below. 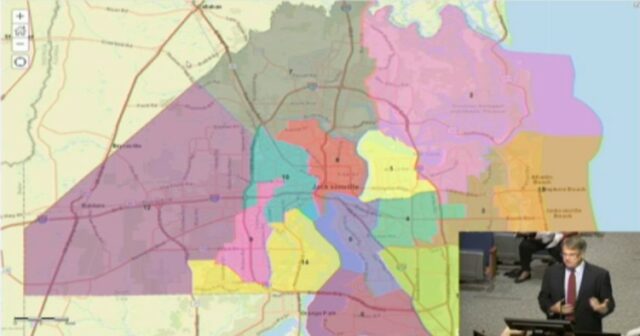