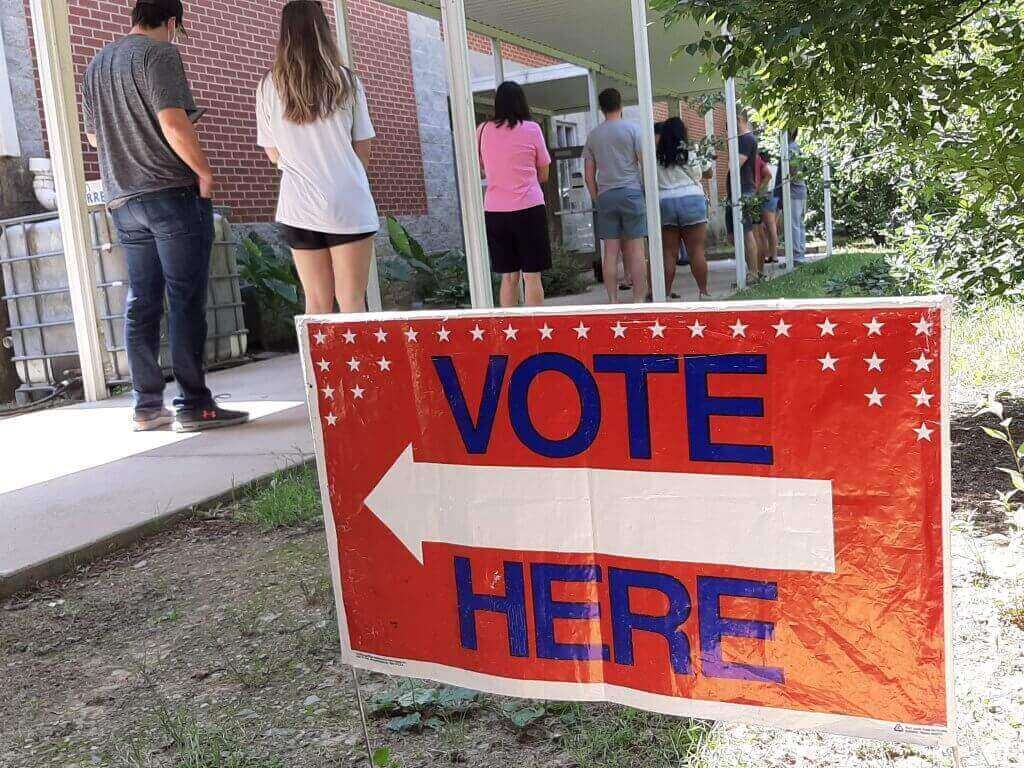 'The messaging is being repeated, but if the Primary was telling, it may not come.'

A close ally of Republican Pennsylvania gubernatorial candidate Doug Mastriano has a plan that she claims will help win him the election and prevent voter fraud: She wants voters to cast their ballots “as late in the day as possible” on Election Day.

Conspiracy theorist Toni Shuppe, who has ties to QAnon and who is rumored to be one of Mastriano’s top picks for secretary of state if he becomes Governor, says voting late in the day will deliberately “overwhelm the system” and will “stop the steal of 2022” by preventing a voting machine hacker from influencing vote totals, according to the Philadelphia Inquirer.

The strategy, which is based on no evidence and is counterintuitive to the traditional campaign tactic of securing votes early, isn’t isolated to Pennsylvania. Chuck Broerman, the Republican clerk in El Paso County, Colorado, said he’s also heard it from the local Republican Party and other allied groups.

“They’re saying, ‘Wait until Election Day, go and vote in person, wait until 3 o’clock in the afternoon, overwhelm the system, expose the algorithm,’” he said.

For weeks, election deniers and others who believe unfounded conspiracy theories about the legitimacy of the 2020 Election have been pushing voters not to vote early and to cast their ballots on Election Day. Now the effort has gone even further, with some telling Republicans to vote as late in the day as possible.

They say voting late in the afternoon or evening on Election Day would thwart plans by Democrats to commit fraud once they know how many ballots they need to win elections. There is no legitimate evidence to support their claims that Democrats have in the past or could rig an election based on Republican early vote totals.

But if large numbers of voters show up to vote late on Election Day, it could overwhelm already overworked election offices and create long lines, forcing polling places to stay open late into the night to accommodate everyone waiting to vote. An influx of late voters could also push back when election workers could start processing late-arriving mail ballots, delaying the release of election results and allowing more time for misinformation to spread.

Broerman said that “it delays results if you wait until the end of the day to vote.”

He said he typically likes to release initial results five or 10 minutes past 7 p.m., when polls close, “but if I still have people that are inside the polling places voting, everyone’s got news feeds on their cellphones nowadays and the last thing I want is for someone to have their hip buzzing, and it’s a report that X, Y, or Z candidate has been projected to be the winner.”

But many election officials said they’re not worried about long lines, given how they prepare for a larger number of voters than typically show up on Election Day.

“We’re ready for large numbers on Election Day. They’re not going to throw us off,” Bill Gates, the Republican chair of the Maricopa County Board of Supervisors in Arizona, told States Newsroom in a press call. “These efforts to disrupt or game the system — they’re not going to be successful, and we’re ready for what may or may not be thrown at us.”

Jocelyn Benson, Michigan’s Democratic Secretary of State, also said that an influx of in-person voters late on Election Day won’t affect her office, which managed a high-turnout election in 2020 and is using the same infrastructure now, for an election where fewer voters are expected.

“We’re built for large turnout throughout the day,” she told States Newsroom on the call.

Even in blue states

In Maryland, an aide for Michael Peroutka, the Republican candidate for state Attorney General, encouraged voters at a rally in late October to arrive two hours before the polls close on Election Day.

“Vote on Nov. 8 as late in the day as possible,” his campaign coordinator said, according to Maryland Matters. “If everyone could stand in long, long lines at 6 o’clock, that would actually help us.”

David Becker, executive director of the Center for Election Innovation & Research, a nonprofit that works with election officials, said he’s hearing the same rhetoric across the country.

“When I start seeing the same thing being brought up in Maryland, it’s pretty clear there is some coordination of messaging that is going on around the country,” he told States Newsroom in a press call.

The messaging is being circulated by far-right conspiracy theorists who have said that voter fraud cost former President Donald Trump the 2020 election. On Gab, a far-right social networking platform, a user with almost 6 million followers wrote on Oct. 22: “VOTE IN PERSON on NOVEMBER 8th! VOTE AS LATE IN THE DAY AS YOU CAN! This helps make it harder for the DEMOCRATS to cheat and create fake ballots.”

Carly Koppes, the clerk in Weld County, Colorado, said she has also seen right-wing calls to vote late on Election Day in emails and on social media and noted that many of them encourage voting after 3 p.m., a time she says seems random.

Trump himself has weighed in, saying in a recent rally that voters should cast ballots on Election Day rather than voting early because “it’s much harder for them to cheat that way,” according to The Associated Press.

In late October, hundreds of Trump-supporting Republicans gathered in a Phoenix church — the same church that hosted the President for a rally just months into the COVID-19 pandemic and claimed to have a special coronavirus-killing air system — to hear from the Republicans running for statewide office in Arizona. Early voting in Arizona had been underway for more than a week and voters on the active early voting list had already received their ballots by mail, but the attendees were encouraged to wait to vote.

“You can spoil your mail-in ballot if you take it to the polls and ask for a day-of ballot,” said Mark Finchem, the GOP candidate for Secretary of State and a staunch election denier, encouraging supporters to vote on Election Day. “That means that your vote will be counted on the same day as the election and not the following day.”

The rhetoric has also popped up in Washington, where every voter casts a mail ballot. Far-right Republican Joe Kent, who is running for the U.S. House, encouraged his supporters to wait to submit their ballots until Election Day to discourage any “funny business,” according to The Washington Post.

Brad Raffensperger, Georgia’s Republican Secretary of State, told States Newsroom in a press call that he’s heard people told to bring their absentee ballot to polling places on Election Day, which could slow down the reporting process.

“People are busy running an election with people showing up for in-person, so now you have to make sure that’s an accurate absentee ballot, verify who it came from, separate it out, and begin the scanning process,” he said. “It just takes more time.”

The pressure comes after unprecedented numbers of people voted by mail in November 2020, in the midst of the coronavirus pandemic. Election-denying Republicans have targeted mail-in voting, claiming it allows for voter fraud, and candidates for election administration roles like Finchem have said they would eliminate vote by mail.

Despite the messaging, there’s no guarantee that a larger number of voters than normal will choose to vote late. Koppes said she saw the same messaging before Colorado’s June primary, but “it didn’t come to fruition.”

“The messaging is being repeated, but if the Primary was telling, it may not come,” she said. “But we’re always prepared for rushes.”