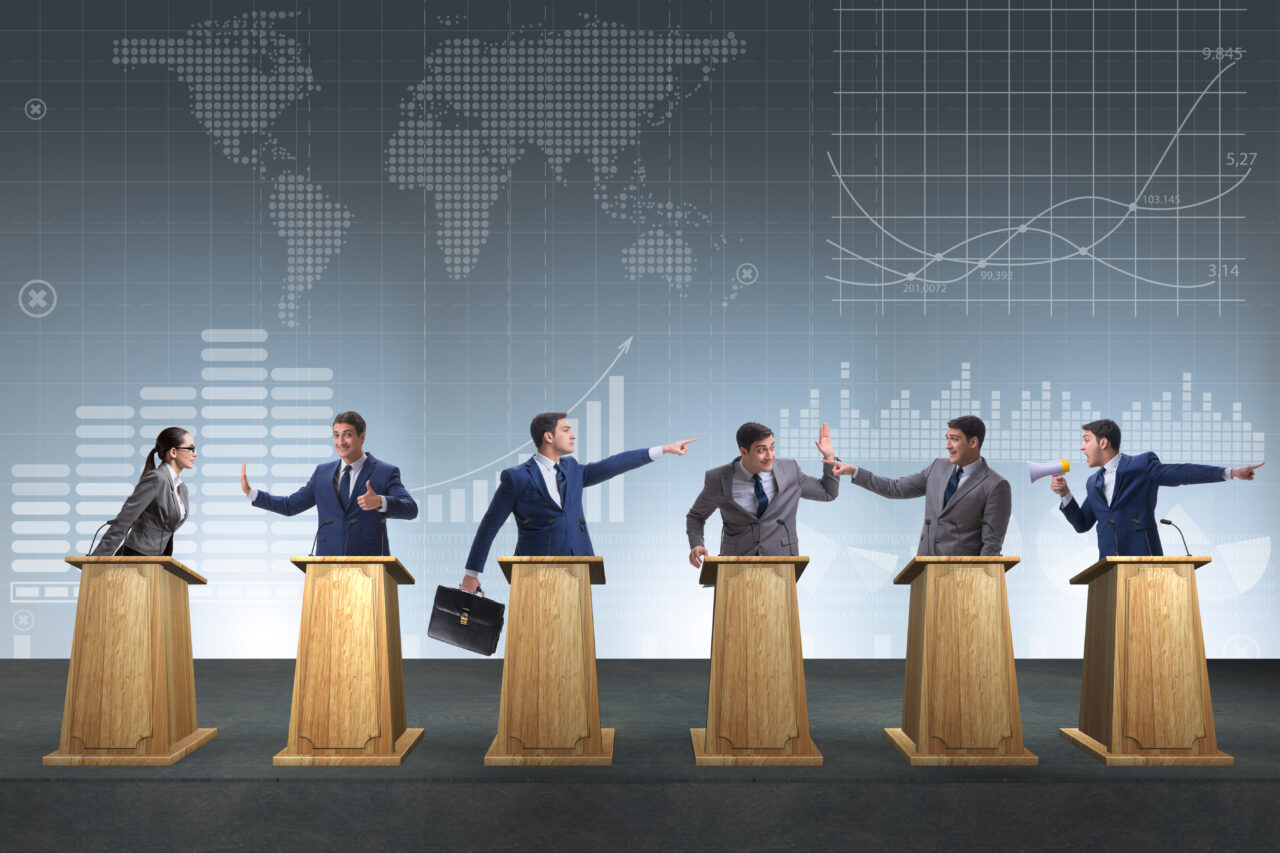 Debate season begins in the Jacksonville Mayor's race — with one notable abstention.

The event starts at noon at the Marriott (formerly the Omni) on Water Street Downtown.

Democrats Donna Deegan, former Sen. Audrey Gibson, and Theresa Richardson will all be on hand, as will Republicans LeAnna Gutierrez Cumber, Al Ferraro, and Frankie Keasler.

Also in the mix are non-major party candidates Omega Allen and Darcy Richardson.

One notable absence: JAX Chamber CEO Daniel Davis, who won’t be on hand for a crowded field of candidates speaking before one of the most engaged groups in Northeast Florida.

“The format of the debate will allow for a brief introductory message by each candidate to be followed by a moderated discussion,” a news release from the club notes. “The debate will conclude with questions from the members of the Rotary Club of Jacksonville. While members of the press will be invited to attend, they will not be allowed to ask questions per our club’s Manual of Policies and Procedures.”

Hank Coxe, past president of both the club and The Florida Bar, will moderate.

This debate will try to level a race that is highlighting fundraising numbers almost as much as ideas.

Davis, of course, has more than $4.5 million on hand, and his decision to skip the debate says he doesn’t think he needs to move this crowd of people familiar with his work at the Chamber.

But others of similar prominence, including Gibson, City Council members Cumber and Ferraro, and former television journalist Deegan, will take the questions Monday.

Jacksonville will serve as the North American HQ for Paysafe, a payment processor, with 600 jobs created in the next three years. The announcement was rolled out Monday, with everyone from Gov. Ron DeSantis on down taking note.

“Paysafe’s decision to establish its headquarters in Jacksonville further solidifies Florida as the top destination to grow a business,” said DeSantis. “Businesses are continuing to come here because we have cut taxes, invested in our workforce, and made sure businesses can find freedom in the Sunshine State.”

“This year, under Gov. DeSantis’ leadership, Florida has seen more business formations than any other state, and our economy has outpaced the nation’s by virtually every measure,” said Florida Department of Economic Opportunity Secretary Dane Eagle. “DEO is excited to welcome Paysafe teams from around the country to the most business-friendly state in the nation, and I look forward to their success in the Sunshine State.”

State money will help the company expand, with $3 million from the state High-Impact Performance Incentive (HIPI) program headed to Paysafe. Additionally, the company is on track for $10 million in city incentives, pending Council approval.

“It is an honor to welcome Paysafe’s North American headquarters to Jacksonville,” said Jacksonville Mayor Lenny Curry. “This addition is just another example of Jacksonville’s growing reputation as a global leader in fintech. We remain committed to setting the stage for Jacksonville’s continued economic success.”

Sen. Travis Hutson will not be Senate President.

But in a measure of the good vibes in the GOP caucus, the St. Johns County Republican will have a prominent role helming the new Fiscal Policy Committee, according to President-Designate Kathleen Passidomo.

“He has a keen knack for bringing stakeholders to the table, listening, and working to find common ground. Travis shares my vision for the Committee on Fiscal Policy, and I am confident his diverse policy background and institutional knowledge will be a tremendous benefit to the Senate as he chairs this new committee,” the President-Designate added.

Hutson tells Bold that the new committee should help with some of those issues that seem to pile up near the end of every Legislative Session.

“The President and I have been discussing how the Senate would look in four years. This committee will act as a last stop before the floor. It is designed to unwind the bottleneck of appropriation and rules near the end of the Session. It will hear both policy and budgetary bills. This gives senators more time to vet bills before final passage,” Hutson noted.

Those following Tallahassee know well the issues that can happen with legislation, especially those on which the Senate and House diverge.

Fiscal Policy’s ultimate role in that process will be worth watching this Spring and beyond.

This weekend, Jacksonville Sheriff-elect T.K. Waters will take over the job officially, with a swearing-in at a local church Sunday.

Interim Sheriff Pat Ivey and Chief Judge Mark Mahon will be at the event, slated for noon at the Bible Believers Baptist Church.

Waters is eager to get started, and to that end, has already filed for the 2023 election as of Monday.

“The work starts right away. Everyone in our great city deserves to live safely and I am ready to deliver a Sheriff’s Office that does just that. It is crucial that Jacksonville has a Sheriff over the next four years who will fight relentlessly to reduce crime, improve transparency, and make our city an even better place to live and raise a family.”

Waters defeated Democrat Lakesha Burton by nearly 10 points last Tuesday in an election designed to fill the remaining months of the term of Mike Williams, who resigned under a residency scandal. Williams now runs the Florida Department of Law Enforcement’s Jacksonville office.

Jacksonville City Council member-elect Reggie Gaffney Jr. will be on the Council soon.

This month, he was elected in a Special Election to replace his father, who lost a Primary for the state Senate in August and had to resign the seat preemptively. But he won’t be on the Council until Nov. 21, says Council President Terrance Freeman.

The delay is due to election certification, Freeman notes.

The period here is somewhat slower than the August swearing-in of Tyrona Clark-Murray to replace Garrett Dennis. Clark-Murray got a majority of votes in the District 9 election and was sworn in two days later. But for the younger Gaffney it will be more like two weeks.

Though Gaffney won a Special Election under the City Council redistricting map approved a decade ago, he need not worry, as the new map ensures he will be the District 7 incumbent, with his address included in the district under the new map also. City Council members prioritized protecting incumbents.

Jacksonville City Council District 3 on the Southside is generally safe for Republicans, and fundraising to this date shows that it should be particularly safe for one in particular.

Will Lahnen is one of just two candidates in the field, and the only one currently with any fundraising. He brought in more than $70,000 during his first two months in the race, with name donors including current Council member Aaron Bowman, Gary Chartrand, the Jacksonville Kennel Club and Orange Park Kennel Club, and ICI Homes, which Mori Hosseini chairs.

The only other candidate, Natalie Alden, has reported no fundraising yet.

Council member Bowman won his election in 2015 handily and faced few obstacles to re-election after that. It’s possible District 3 could see that kind of continuity once more.

It won’t be known until January’s qualifying period whether a Democrat steps up to oppose Rory Diamond’s re-election to the City Council, but the Republican incumbent finally kicked off his fundraising in October with $8,400 brought in.

Diamond also has a political committee. Friends of Rory Diamond has around $10,000 on hand.

Diamond faced no competition when he ran four years ago to succeed Bill Gulliford in his District 13 seat, which encompasses Jacksonville beach communities. Democrats haven’t played much in recent beach battles, with no one running in HD 16’s open seat, won by Kiyan Michael this November against write-in opponents.

Jacksonville City Council redistricting may or may not be completed — depending on how a federal judge likes its second try at a map.

But things are shaping up well for one Westside member’s re-election.

Republican Randy White looks poised to face two Democrats on next March’s ballot for District 12. But he seems to have the most substantial support in terms of the city’s inside players, as his October fundraising report showed.

While he raised a little more than $15,000, the names of the donors point to staunch support. Curry and former senior staffers Jordan Elsbury and Sam Mousa, as well as the First Coast Conservatives political committee associated with former Rep. Travis Cummings all ponied up in October.

Two Democrats in the field have catching up to do. Johnny Neal Causey has roughly $1,000 on hand. Former state House candidate Tammyette Thomas has approximately $55.

Council District 10 has new territory in the latest redistricting map, extending south to pick up Riverside and Avondale from areas that include Moncrief and Edward Waters College.

The fresh territory is not reflected in the candidate field — yet. And one question to watch ahead of January’s qualifying is whether the field expands with candidates from the southern part of the reconfigured district.

The leading fundraiser is incumbent Democrat Brenda Priestly Jackson, who abandoned her at-large candidacy some months back. Priestly Jackson has raised just $3,700 so far, a fundraising effort highlighted by October donations from Council members Matt Carlucci and Reggie Gaffney.

No other candidate has more than $100 on hand.

Priestly Jackson got over 65% of the vote in 2019 before the district absorbed Riverside and Avondale in the latest round of redistricting. Recent elections have seen those areas move into minority access districts in the House and Senate, and city districts have followed suit.

Thanksgiving is next week, and with that comes an opportunity to support local small businesses through Christmas shopping.

“More than ever, we need to support the small businesses in our community,” said Jake Gordon, Downtown Vision CEO. “We’re looking forward to bringing back the Shop Small QR Code Scavenger Hunt to help encourage people to #ShopSmall in Downtown Jacksonville this holiday season.”

Participating businesses this year include Chamblin’s Uptown, The Greenhouse Bar and Wolf & Cub, plus the 904 Pop-Up Market and Riverside Arts Market. And Downtown Vision notes that it will help to have your smartphone on hand.

“Shoppers are encouraged to download the Eventzee app, create an account and check DTJax.com/ShopSmall for the join code, then hunt for QR Codes at participating businesses throughout the Downtown area Nov. 26. The first 100 shoppers who seek out and scan at least five QR Codes on Small Business Saturday will receive a $20 #DTJax e-Gift Card from Downtown Vision. All shoppers who scan at least five QR Codes will be entered into a drawing to receive a $100 #DTJax e-Gift Card.”

However, instead of buying the standard vending machine fare, people can insert money to donate a goat for a needy family in Africa or even an acre of sweet potatoes for another family in Asia.

And in St. Augustine, using the Light the World Mobile Giving Machine, you can buy a stroller to ease the burden of a mother, healthy snacks for the hungry, children’s socks and pajamas, or even a new outfit for a teenager in need of clean clothes and a little dignity. The local partners for the Light the World Mobile Giving Machine are St. Gerard Campus and Miriam’s Basket.

The Light the World Mobile Giving Machine will be at the St. Augustine Visitor Center on Castillo Drive from Thanksgiving weekend’s Black Friday, Nov. 25, to Giving Tuesday Nov. 29, during the annual Nights of Lights featuring millions of white lights creating a magical atmosphere in the Nation’s Oldest City.

Since 2017, these Giving Machines have been placed in select cities worldwide, raising more than $15.1 million for charitable organizations.

The Light the World Mobile Giving Machine is sponsored by The Church of Jesus Christ of Latter-day Saints and is an instant act of service for people looking to help those in their communities and around the world. One hundred percent of all donations go directly to participating charities. For more information, please visit https://www.mobilegivingmachine.org.