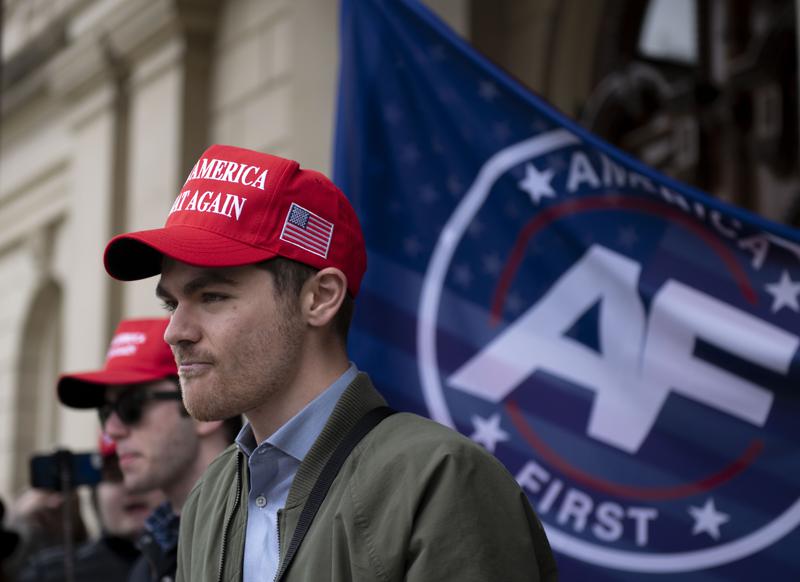 Trump released a series of statements Friday trying to explain the circumstances of the meeting.

Former President Donald Trump is renewing attention to his long history of turning a blind eye to bigotry after dining with a Holocaust-denying white nationalist and the rapper formerly known as Kanye West just days into his third campaign for the White House.

Trump had dinner Tuesday at his Mar-a-Lago club with West, who is now known as Ye, as well as Nick Fuentes, a far-right activist who has used his online platform to spew antisemitic and white nationalist rhetoric.

Ye, who says he, too, is running for president in 2024, has made his own series of antisemitic comments in recent weeks, leading to his suspension from social media platforms, his talent agency dropping him and companies like Adidas cutting ties with him. The sportswear manufacturer has also launched an investigation into his conduct.

In a statement from the White House, spokesman Andrew Bates said: “Bigotry, hate, and antisemitism have absolutely no place in America — including at Mar-A-Lago. Holocaust denial is repugnant and dangerous, and it must be forcefully condemned.”

Trump, in a series of statements Friday, said he had “never met and knew nothing about” Fuentes before he arrived with Ye at his club. But Trump also did not acknowledge Fuentes’ long history of racist and antisemitic remarks, nor did he denounce either man’s defamatory statements.

Trump wrote of Ye on his social media platform that “we got along great, he expressed no anti-Semitism, & I appreciated all of the nice things he said about me on ‘Tucker Carlson.’” He added, “Why wouldn’t I agree to meet?”

The former president has a long history of failing to unequivocally condemn hate speech. During his 2016 campaign, Trump waffled when asked to denounce the KKK after he was endorsed by the group’s former leader, saying in a televised interview that he didn’t “know anything about David Duke.” In 2017, in the aftermath of the deadly white supremacist protests in Charlottesville, Virginia, Trump was widely criticized for saying there was “blame on both sides” for the violence. And his rallies frequently feature inflammatory rhetoric from figures like U.S. Rep. Marjorie Taylor Greene, a Republican from Georgia, who spoke earlier this year at a far-right conference organized by Fuentes.

The latest episode, coming just one week after Trump launched his third run for the Republican nomination, also underscored how loosely controlled access to the former president remained, particularly without a traditional campaign operation in place.

Trump’s Mar-a-Lago club came under intense scrutiny amid revelations that Trump was storing hundreds of documents with classified markings there — sparking a federal investigation. But the club — and the people it gave access to Trump — had long been a source of consternation among former White House aides.

Mar-a-Lago is not only Trump’s home, but also a private club and event space. Paid members and their guests dine alongside him and often mingle with him; members of the public can book weddings, fundraisers and other events, and Trump often drops by.

Ye first shared details of the dinner in a video he posted to his Twitter account Thursday. Ye said he had traveled to Florida to ask Trump to be his 2024 running mate, and that the meeting had grown heated, with Trump “perturbed” by his request and Ye angered by Trump’s criticism of his estranged wife, Kim Kardashian.

“When Trump started basically screaming at me at the table telling me I was gonna lose. I mean, has that ever worked for anyone in history, telling Ye that I’m going to lose?” Ye asked in the video. “You’re talking to Ye!”

Ye also said Trump was “really impressed with Nick Fuentes,” whom he described as “actually a loyalist” and said he’d asked Trump, “Why when you had the chance did you not free the January 6th-ers?” referring to the defendants who were alleged to have participated in the deadly insurrection at the U.S. Capitol on Jan. 6, 2021.

Trump released a series of statements Friday trying to explain the circumstances of the meeting.

“Kanye West very much wanted to visit Mar-a-Lago. Our dinner meeting was intended to be Kanye and me only, but he arrived with a guest whom I had never met and knew nothing about,” Trump said in his first statement released by his campaign.

Not long after, Trump took to his social media network to say that Ye and “three of his friends, whom I knew nothing about” had “unexpectedly showed up” at his club.

“We had dinner on Tuesday evening with many members present on the back patio. The dinner was quick and uneventful. They then left for the airport,” he wrote.

Hours later he again posted, saying he had told Ye that he “should definitely not run for President,” and that “any voters you may have should vote for TRUMP.”

“Anyway, we got along great, he expressed no anti-Semitism, & I appreciated all of the nice things he said about me on ‘Tucker Carlson.’” he added. “Why wouldn’t I agree to meet? Also, I didn’t know Nick Fuentes.”

Fuentes, meanwhile, said after the trip that, while he couldn’t rule out that Trump had heard of him, “I don’t think he knew that I was me at the dinner.”

“I didn’t mean for my statements and my whole background to sort of become a public relations problem for the president,” he added on his show.

The meeting drew immediate criticism from Trump critics as well as some supporters, including David Friedman, who served as Trump’s ambassador to Israel.

“To my friend Donald Trump, you are better than this. Even a social visit from an antisemite like Kanye West and human scum like Nick Fuentes is unacceptable,” Friedman wrote in a tweet. “I urge you to throw those bums out, disavow them and relegate them to the dustbin of history where they belong.”

On Saturday, former Secretary of State Mike Pompeo, a potential 2024 rival, also denounced antisemitism, without directly referencing the dinner or the president under whom he served.

“Anti-Semitism is a cancer,” Pompeo wrote, adding: “We stand with the Jewish people in the fight against the world’s oldest bigotry.”

Joe Biden, asked about the Trump dinner meeting while vacationing in Nantucket, Massachusetts, replied, “You don’t want to hear what I think.”

previousWinner and Loser of the Week in Florida politics — Week of 11.20.22