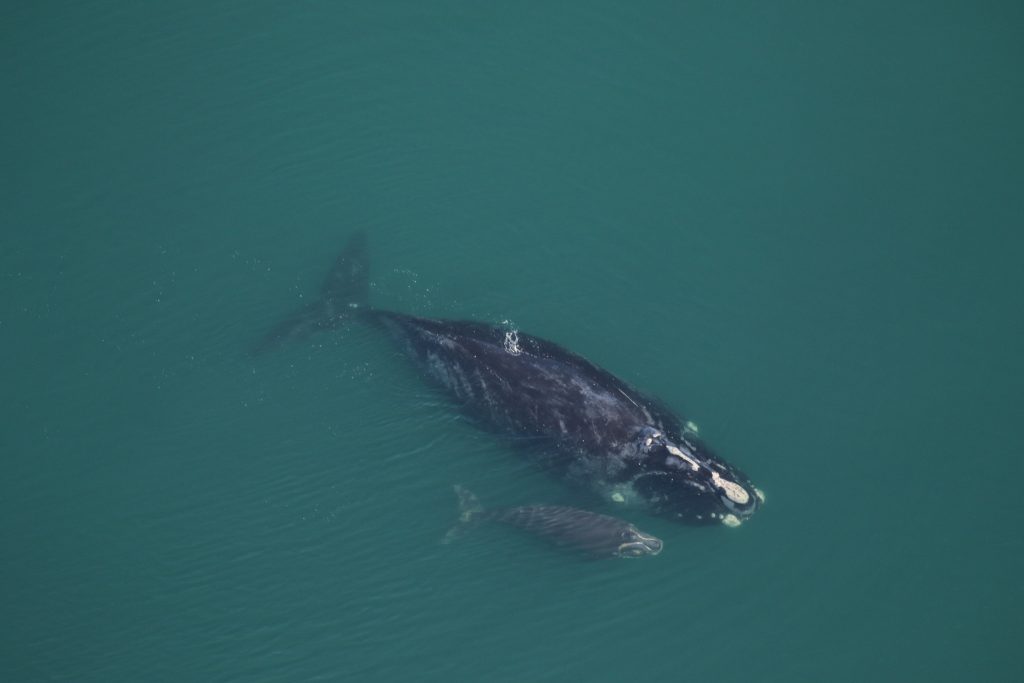 More time-area closures could be coming.

The announcement of the first North Atlantic right whale calf of the season is one of celebration, with the knowledge of the long — and perhaps impossible — road back to sustainability for one of the largest marine mammals in the world.

An aerial crew this week spotted 42-year–old right whale Medusa off the St. Catherines Sound on the Georgia coast with her seventh calf, and the first one of the 2022-23 season.

“Recovery (for the right whale population) had been slow and steady until 2010 when we started to see a decline,” said James Powell, President and Executive Director of the Clearwater Marine Aquarium Institute. An Institute survey team spotted the calf.

“Most recent population models show that the numbers are declining again for various reasons including a slow reproduction rate, threats from entanglement in fishing gear, collisions with large vessels, and possibly other factors not yet identified.”

Georgia Department of Natural Resources staff on the scene were able to take video of the pair, along with a skin sample from the calf for genotyping.

Into this is the work of the Atlantic Large Whale Take Reduction Team (TRT), the federal task force with the duty to head up American efforts to save the species from extinction. The TRT wrapped up days of meetings not long ago, which Georgia commercial fisherman Charlie Phillips relayed to the South Atlantic Fishery Management Council (SAFMC) at its quarterly meeting this week.

The TRT’s job recently has been to reduce risk to right whales. That danger, according to the statistical work completed, exists mostly in waters off New England. Little of the risk is in the calving grounds off Northeast Florida and Southeast Georgia, but more time-area closures could be coming.

“It has been some of the hardest negotiations, between fishermen and the regulators, that I have ever seen,” Phillips said.

“The fishermen have been working with the regulators to the best of their abilities, asking questions. Most of the risk (to right whales) is in the Northeast — a little in the Mid-Atlantic, but almost all of it’s in the Northeast, and it’s going to be centered around lobster gear and snow crab gear, things like that. They’re changing the regulations on gillnets, monkfish, dogfish — almost everything.”

The risk is close to zero in the calving grounds because of the lack of fixed gear in the water, the sort of heavy ropes attached to large traps used in the Northeast that have proven so dangerous. Risk is determined by the number of lines in the water in areas that co-occur with the presence of right whales.

Waters off Florida provide 0.2% of the overall perceived risk.

“They’ve even talked to the state managers about modifying blue crab regs, and where they fish,” Phillips said.

“Maybe try to move them closer to shore, have some closed seasons, cap the number of traps. Those are ongoing conversations, because a lot of the blue crab fishery is obviously managed by the states. Different states have different regs, and some of it has to go through the Legislature, like South Carolina, which is not cut-and-dry.”

Northern fisheries going toward ropeless gear will have an effect down south, he said, as rules will likely open up the closed black sea bass fishery to people using ropeless gear only.

Vessel speed reductions, the other half of the rules changes, didn’t get as much attention from the TRT. The SAFMC sent a letter Oct. 31 to NOAA Fisheries asking for the agency to address vessel speed in a different manner. The main thrust of the proposed speed rule is dropping the maximum speed to 10 knots for vessels 35 feet or longer. In the Southeast, that zone would last Nov. 15-April 15.

The rule is already in effect for vessels longer than 65 feet.

“Due to mild winter weather in the Southeast, there is significant fishing effort during the months impacted by the proposed rule change, leading the Council to dispute the assertion in the proposed rule that the seasonal nature of the rule will minimize impacts,” according to the letter. “Many charter/for-hire vessels operating throughout the South Atlantic region opt to run two short trips a day as opposed to one longer trip.

“The proposed speed restrictions would prevent charter/for-hire fishermen from running such back-to-back trips due to the additional travel time required. This would not only decrease income for charter/for-hire businesses, but also changes the types of trips (i.e., half day trips) they are able to offer to their customers.”