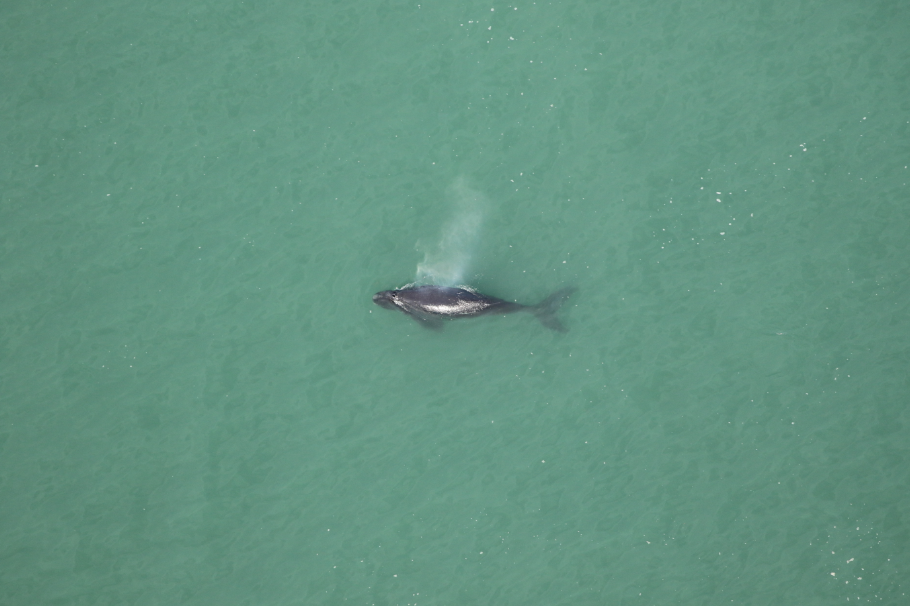 Members of the public found the calf, deceased, under a Morehead City port pier Jan. 7.

One of the 10 North Atlantic right whale calves born this season is dead. The calf, a male, was last seen alive Jan. 3, when a member of the public reported a sighting to the Southeast Regional Stranding Network. At the time, the whale was swimming close to shore near Beaufort Inlet, North Carolina.

“On-water responders from the North Carolina Maritime Museum also quickly mobilized and were able to locate the calf. The aerial survey team widened their search in the hopes of locating and identifying an adult whale that could be the potential mother. However, no other right whales were found in the area.”

Members of the public found the calf, deceased, under a Morehead City port pier Jan. 7.

Scientists believe, from still photos and video, that the calf was around a couple of weeks old, underweight and in poor health. Calves nurse on their mothers on the trip from calving grounds off Florida and Georgia back north to New England and Canada. Without its mother around, the calf wasn’t going to live long.

“At this point, we do not know who the calf’s mother is or her condition,” according to NOAA. “Scientists maintain an extensive database and photo-identification catalog of all North Atlantic right whales. We will use this catalog and a genetic sample from the calf to determine its relatives.”

This is right whale death No. 93 since the beginning of the unusual mortality event in 2017. Experts believe every North Atlantic right whale death for the past 50 years is human-caused, mainly through heavy fishing gear entanglements and ship strikes.

Congress deterred regulatory work to do something about those deaths for the next six years, as Maine legislators sought to protect the state’s lobster and crab industry from having to make changes to methods and the traps and pots used.

There are fewer than 340 North Atlantic right whales in existence, and fewer than 70 calving females. Births are so few and far between, and deaths are so many, the species is on a path to extinction in 20-30 years.