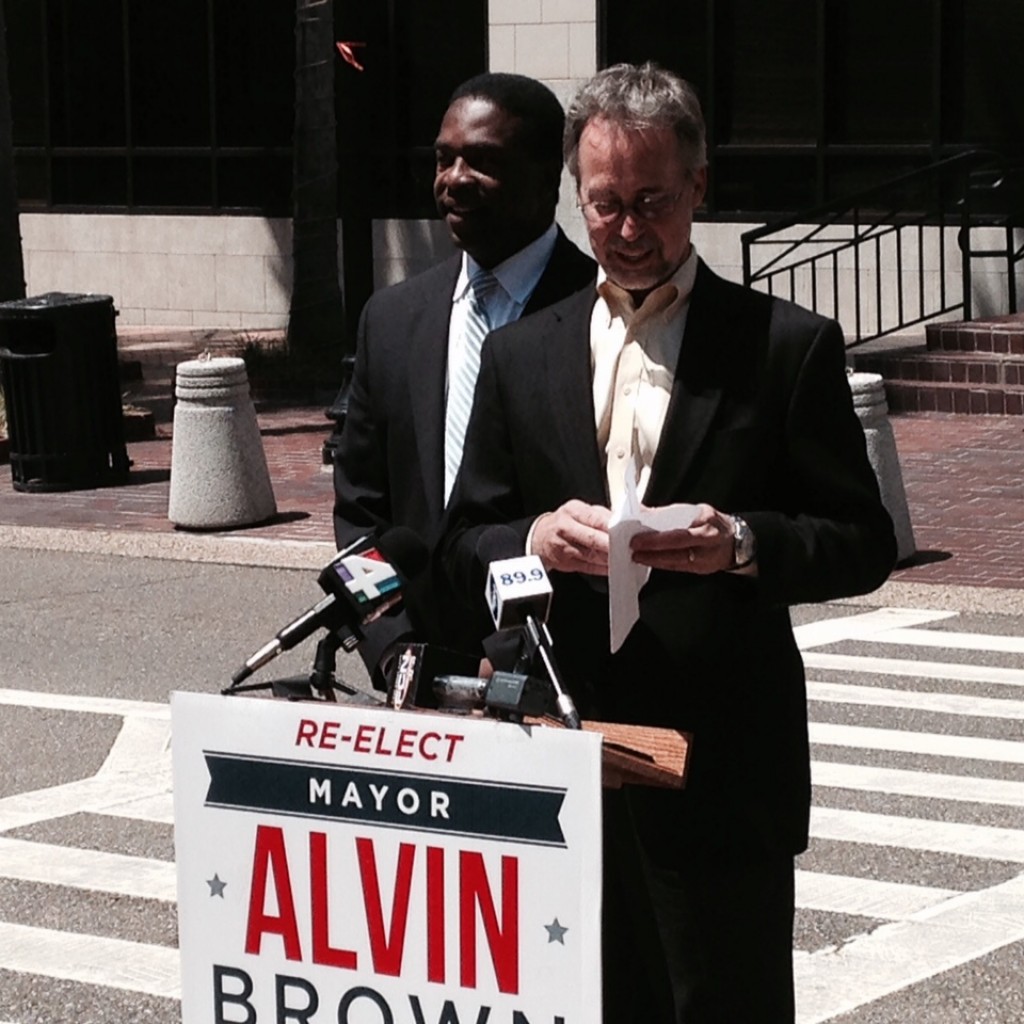 Having heard that former mayoral candidate Bill Bishop was at the REC meeting, I was curious about his thoughts regarding both chairmen. So I texted him.

Bishop, as almost invariably has been the case when I’ve asked him a question (even a pointed question), gave me an answer.

“Robin presided over a very divisive period for the Duval GOP the likes of which I hope we never see again. I believe Lake is the right person to lead the party in a unified way,” Bishop texted back.

Of course, there is backstory. Bishop ran as the “other” Republican in the race against Lenny Curry, refusing to heed the strong establishment signals that Curry was their chosen candidate. An acrimonious REC meeting in January led to Curry getting the official party endorsement, and led to hurt feelings among a few Bishop supporters.

After the March election, in which Bishop finished third, there was a month or so when Bishop demurred endorsing Curry or Alvin Brown. He said he was running for mayor in 2019, issuing what some considered a preemptive challenge. Then, weeks before the election, Bishop endorsed the incumbent.

That led some, including this writer, to wonder whether there was a quid pro quo. I asked him about it on more than one occasion. Meanwhile, Curry talked with his lawyer after a conversation with Bishop, in which he thought the Republican was trying to cut a deal for his support.

Of course, we know what happened. Bishop accompanied Brown to hipster spots throughout the urban core, to try to reassure the restive cool kids that they should be down with Brown. But in the end, it didn’t matter. The election was decided by traditional Republicans voting for the challenger over the incumbent.

Since even before his inauguration, Curry has said that “the campaign was over.” Now, in the midst of governing the city, it almost certainly is for the mayor.

That’s not strictly true for Republicans in this city, though, many of whom I heard from today.

One comment was from Cindy Graves, committeewoman for the Duval GOP.

“Pretty odd & disappointing that you chose to ‘contact’ Bishop for comment when thousands of others are available and more knowledgeable,” Graves wrote.

Bishop’s deviation from the Republican establishment was a major story up until Curry’s election. He ran and won twice as a Republican. Despite his stance that Jacksonville needs an inclusive Human Rights Ordinance, Bishop has been fundamentally conservative on issue after issue related to governance.

Sure, he endorsed Brown, but did he change party registration?

Another committeeman, Alexander Pantinakis, made a comment on Bishop that likewise registered disappointment.

Does Bishop have an ulterior motive for supporting Lake Ray? If so, what would it be? Many vocal REC members have made it clear that they were through with Bishop even before he endorsed Alvin Brown.

And regarding Lumb, he gives as good as he gets. He said point blank after the May elections that “Bill Bishop will never be mayor.”

“I have a question for you, What good is it to give an interview regarding matters conducted behind closed doors — the recent election of the Chairman of the Republican Party of Duval County? There is enough problems in Jacksonville. Why can’t differences of opinion be handled in a more discreet manner?”

Is Bill Bishop persona non grata in the Duval County Republican Party? That’s a question that group has to answer for itself. Is his opinion on the local party germane, given his well-documented history with the body? For many who are outside the confines of the Republican Executive Committee who have an opinion on the subject, the first thing that comes to mind is what went down in January.

It’s no stretch to say that, except for actual REC members, the most interesting opinion to Jacksonville residents on this matter might be that of Bill Bishop.

nextHD 25 longshot Adam Morley's on Tinder, but not for the hookups