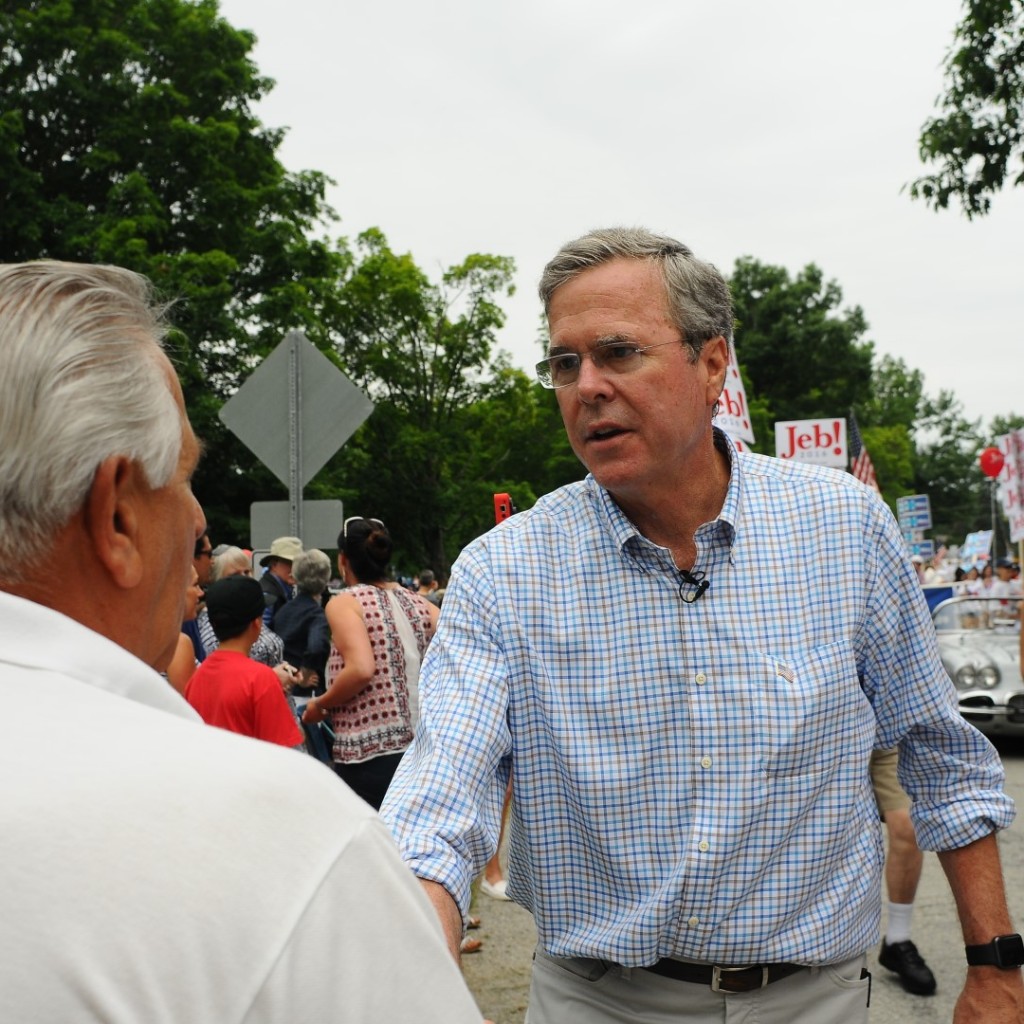 Jeb Bush‘s supporters have spent $15 million on slickly produced ads to win over Iowa voters. Barely registering in the polls and increasingly desperate in the shadow of the Iowa caucuses, he’s now trying a cost-free, personal tactic: hugs.

When 67-year-old Harrison Cass, Jr., of Waterloo, pledged to caucus for Bush Monday night, the former Florida governor jogged across a crowded town hall-style meeting to embrace him.

“I give out hugs,” Bush said at the Cedar Falls event. “I’m from Miami, that’s what we do.”

Bush, once considered the Republican presidential front-runner, is doing whatever it takes to stay relevant in the 2016 contest.

And whether it’s a friendly squeeze or a scathing attacks ad from his allies, he’s showing no signs of going quietly. That’s despite the wishes of some Republican strategists, who fear his underdog candidacy is making it harder for his party’s mainstream wing to coalesce behind another candidate.

All the while, billionaire businessman Donald Trump has maintained a huge lead over the so-called establishment candidates.

Right to Rise has spent more than $24 million on ads contrasting the former Florida governor with one or more of those three, most often Rubio, data from advertising tracker Kantar Media’s CMAG show. That’s on top of a tidal wave of millions of dollars of mail to voters in Iowa and New Hampshire opposing Rubio, Kasich and Christie — sometimes all three at once, expenses documented in Federal Election Commission reports.

Overall, Bush’s allied super PAC had spent more than $80 million on television and radio advertising this campaign season as of midday Sunday. That includes more than $15 million in Iowa alone — which is about as much as the total by super PACs aligned with the other Republican candidates still in the race.

“Talk to me on Tuesday,” Bush said when asked about his precarious political standing during a brief interview with The Associated Press, referencing the day after Iowa’s caucuses.

“You don’t think that the Republican nominee is gonna get the bark scraped off him by the Clinton machine? This is minor league baseball, man,” Bush told AP.

“If you can’t handle that, then how you gonna deal with a unified Democratic Party that will go out to try to destroy you? And be president of the United States?” he said. “This is a tough job. This isn’t bean bag. Everybody’s gotta get a grip.”

Of Right to Rise’s 22 different commercials on broadcast television, none has played more frequently than a vicious spot hammering Rubio as inconsistent, CMAG data show.

That commercial, depicting Rubio as a weather vane atop a house blowing around to point to different positions the super PAC says he has taken, had been on TV some 2,791 times as of early this week.

Another of the super PAC’s most-broadcast spots is a cutting portrayal of Rubio as just as unqualified for the White House as Trump and Ted Cruz, the conservative Texas senator who has been near the top of many Iowa polls. The commercial begins by reminding viewers that the president must protect the country from attacks.

One by one, the images of Trump, then Cruz, then Rubio are traced behind a desk in the Oval Office as a narrator asks, “Will he be impulsive and reckless, like Donald Trump? Will he have voted to dramatically weaken counterterrorism surveillance, like Ted Cruz? Will he have skipped crucial national security hearings and votes just to campaign, like Marco Rubio?”

“The gross piling on against Marco by Right to Rise does not feel strategic, it feels personal and vindictive,” said Katie Packer, a Republican strategist who favors Rubio and is now leading a campaign to weaken Trump.

“There’s no fundamental flaw other than who he is,” Packer said of Bush, suggesting that voters simply never warmed to the idea of a third Bush presidency. “The best marketing campaign in the world can’t sell a product that people aren’t interested in considering.”

Bush is spending the Iowa campaign’s final hours campaigning alongside his son, Jeb Bush Jr., who set a low bar for success during a campaign appearance in Hiawatha Sunday afternoon.

“It’d be great to be the best governor to out of here and beat expectations, whatever those are,” the younger Bush said when asked about his expectations.

Meanwhile, Harrison said Bush was the first presidential candidate he ever physically embraced. Bush’s public display of affection caught him off guard.

“I thought he was going to shake my hand,” Harrison said. “He’s really trying to reach out to people.”