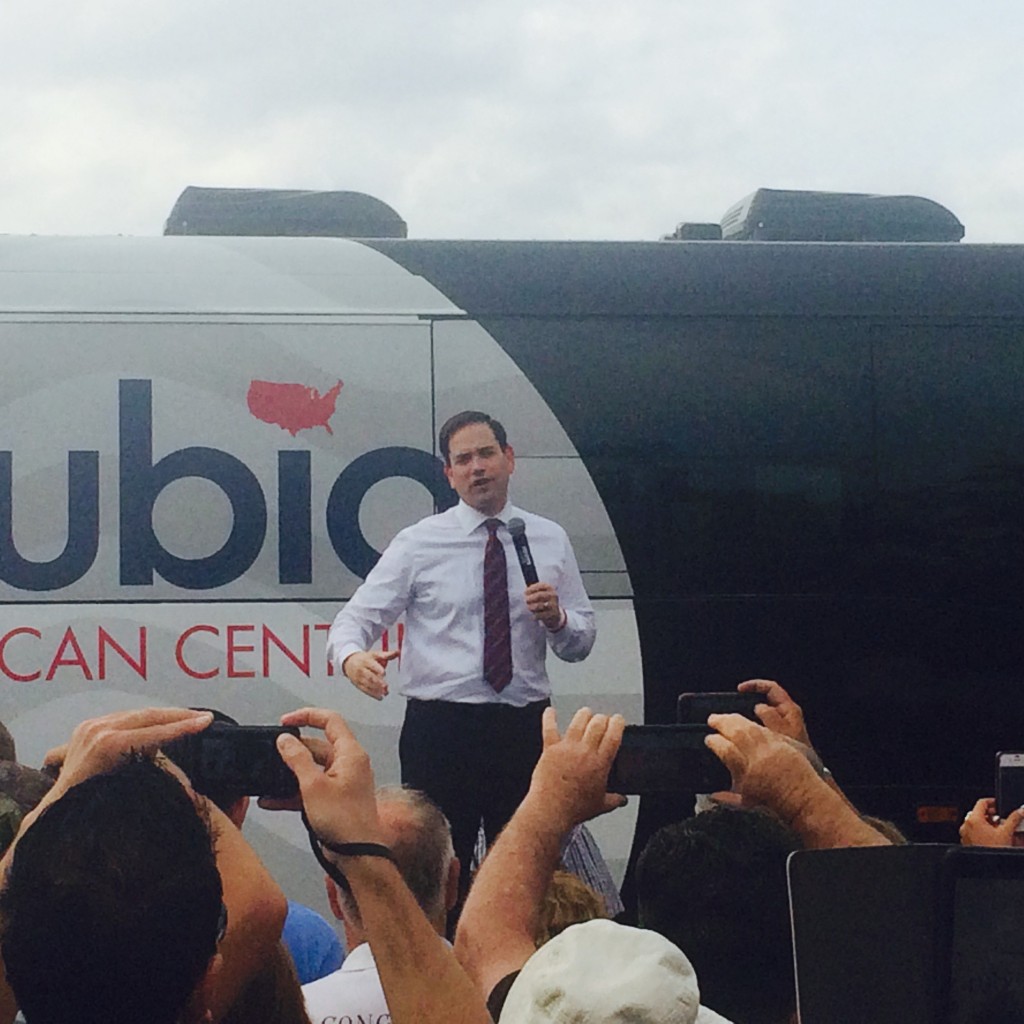 Marco Rubio is targeting Donald Trump in a round of media appearances in Florida this weekend. Rubio has closed the gap between himself and Trump some, but still trails the real estate mogul by 7 points in the Sunshine State.

Rubio’s target at his first Florida stop Saturday was a raucous protest that led to Trump canceling an event in Chicago. During a media availability before his rally at Beckwith Electric in Largo, Rubio said Trump’s rhetoric has led to such divisive behavior.

“This is what a culture in a society looks like when everybody says whatever the heck they want,” Rubio said likely referring to Trump’s vitriol toward Mexicans, Muslims and even women.

“This is a man who in rallies has told his supporters to basically beat up the people who are in the crowd and he’ll pay their legal fees,” Rubio said.

“Donald Trump as our nominee is going to shatter and fracture the Republican Party and the conservative movement,” Rubio said.

During a recent debate, Rubio pledged support to whatever Republican candidate earns the party’s nomination if it’s not him. He reiterated that begrudgingly Saturday.

“But it’s getting harder every day,” he said.

He took that same message to a stage in front of several hundred supporters. Most were older, some were mothers and fathers with young children in tow. There were even a handful of teenagers on hand supporting Rubio.

Rubio rolled into a large parking lot where supporters were gathered on a giant campaign bus. He emerged to an excited crowd chanting his name. Rubio began by evoking American patriotism explaining what makes the U.S. special.

“Last night in Chicago we saw images that made America look like a Third World country,” Rubio said.

Instead of immediately criticizing Trump for setting that tone in this election season, Rubio spent some time describing critics on the left. He directly referred to them as “thugs.” When asked by reporters earlier in the morning whether the protesters in Chicago were thugs, Rubio answered that maybe “some of them” were.

He also blamed the media for the Trump mentality sweeping the nation. He complained that for 10 months he avoided negative attacks, and the media ignored him.

“But the minute I started talking about someone they started cutting live,” Rubio said.

“I’m not proud of some of the things I said,” Rubio said.

Rubio promised such attacks wouldn’t happen again, but lamented the hypocrisy flowing from social media. He said when the 11th GOP presidential debate went negative, people were angry. However, when the very next debate stayed on policy, people asked why he didn’t attack Trump.

Rubio faces an uphill battle in the Presidential Preference Primary. He trails both Trump and Texas Sen. Ted Cruz in delegates won so far. If Rubio loses Florida, his home state, the race is likely over for him.

Rubio dismissed concerns about his underdog status by reminding supporters he came from humble beginnings. The only loan he ever received, he joked referring to Trump’s “small $1 million loan” was more than $100,000 in student loan debt.

He reminded voters that Florida is a winner-take-all state and comes with 99 delegates.

“If I win Florida by one vote, I get all 99 delegates,” Rubio said.

Rubio didn’t directly address many policy issues during his more than 30-minute speech. He joked that the score has been settled on whether or not to repeal Obamacare to a barrage of claps and shouts and he said other policy issues need to come with thoughtful dialogue.

He also played on some familiar conservative talking points.

“You can make poor people richer and you don’t have to make rich people poorer,” Rubio said of encouraging a free market while slipping in a dig on the left’s wish to tax the wealthy.

Throughout the speech Rubio made a handful of attempts to shed his “robot” image. He loosely responded to some comments from the crowd. At one point he joked about college football, calling out a man who was wearing a Florida State University shirt. Rubio is a University of Florida alumnus.

The Pinellas County stop was the first of several on Rubio’s schedule Saturday. Rubio then headed to Pasco County for a meet and greet at  Ron’s Barbecue. He’ll be in Tampa at the Oxford Exchange at 2 p.m. followed by appearances in Lakeland and Pensacola.

previousGOP rivals questioning whether they'd back Donald Trump as nominee