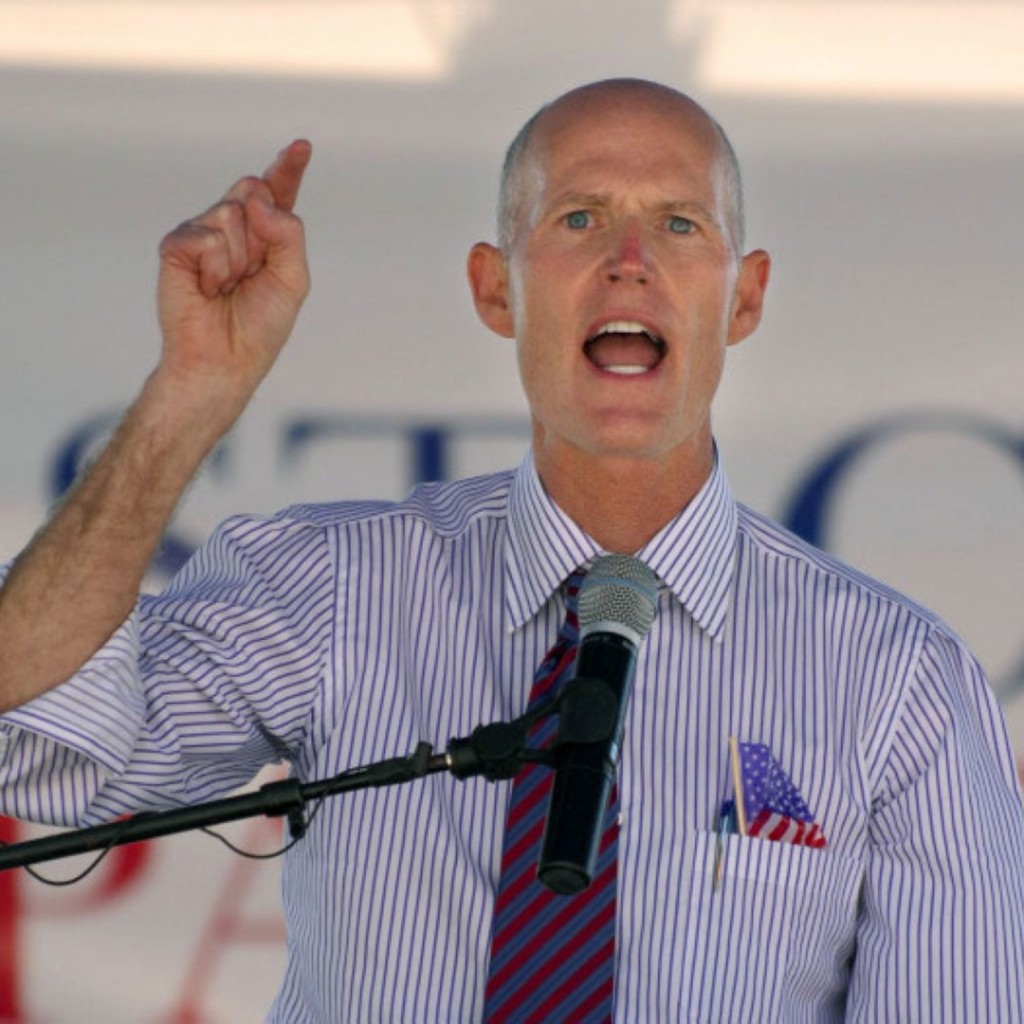 There was once a senator from Virginia who was dismayed to find his picture on the cover of New Times magazine under the headline “the dumbest Congressman of them all.”

He called a news conference to deny it, thereby proving it to be true.

His name was Scott. William Scott.

You can probably guess where this is going.

From that day in 1974 to now, no public official has so witlessly confirmed the substance of a harsh criticism as Florida Gov. Rick Scott did the other day.

A more prudent man would have shrugged off his chance encounter with the citizen, Cara Jennings, who loudly called him an “asshole.”

Left alone, its notoriety would have subsided after the first 2 million or so YouTube and Facebook views.

But Scott is Scott, with an ego nearly as large as that of his newest buddy, Donald Trump, and a slush fund to match.

His Let’s Get to Work political committee swiftly made and posted a video savagely disparaging Jennings.

Unlike a bystander’s smartphone cinema verité video of the original incident at a Gainesville Starbucks, Scott’s riposte is a professional job. A professional hit job.

In the course of claiming that thousands of new jobs have been created in that Gainesville neighborhood, the announcer says “almost everybody” has a job, “except those who are sitting around coffee shops demanding public assistance, surfing the Internet and cursing at customers who come in.”

A former Lake Worth city commissioner, Jennings is a self-described anarchist who refused on principle to say the Pledge of Allegiance. Scott’s body slam harps on her background and calls her a “latte liberal” before getting around to implying that she’s a freeloader.

In fact, she is a freelance consultant who says she was in Gainesville on business, stopped for coffee at Starbucks, and was at work on her computer when Scott walked in. What’s more, she said she doesn’t get a dime of public assistance.

“What I find very offensive is for him to infer that I’m unemployed and just hanging out at Starbucks,” she told me. “I’ve never seen this type of attack against a private citizen.”

Neither have I. To trade public punches with another politician, or a media critic, is an accepted part of the game. To defame a private citizen — one who wasn’t even responsible for publicizing the original incident — is out of bounds.

Some people I know, having seen only the Starbucks video, which begins partway through their confrontation, were critical of Jennings for shouting at Scott.

But to hear the whole story is to understand why she lost her temper.

She began by upbraiding him for refusing to expand Medicaid and for signing a bill to keep state money away from Planned Parenthood, and says “you should be ashamed to show your face around here.”

That’s tough language, to be sure, but nothing worse than what hundreds of editorials have said.

Scott then resorts to his standard mantra, his answer for everything, his non-denial denial for any criticism, by replying that Florida has gotten 1 million jobs on his watch. That’s when she loses it.

As he retreats, she shouts, “A million jobs? Great. Who here has a great job or is looking forward to finishing school? Do you really feel like you have a job coming up?”

She utters the epithet with which he will forever be identified. That is not so much because it was said, but because he dignified it with a response.

For the governor to claim credit for 1 million jobs is somewhat like boasting of making the sun rise or the tides ebb and flow.

PolitiFact acknowledged the statistic to be mostly true.

“That said, ” it added, “we’ll note one caveat that we always raise when analyzing claims such as Scott’s: It’s a stretch for the governor (or the president, or a mayor) to claim credit for such gains.

“But even if governors do deserve some credit for how the economy performs on their watch, there are other things over which they have no control that can have impacts that are at least as big, if not bigger. These include changes in technology, fluctuations in the national and international economy, demographic shifts (the Census Bureau estimates the state’s population has increased by about 1.46 million people since April 2010, for instance), and events like natural disasters.

Scott bought his way into power when Florida was still recovering from the 2008 recession. The job growth since then owes in some part to President Barack Obama‘s stimulus program, which Scott’s predecessor praised and was rejected by his party for saying so.

In any case, Florida’s job growth is beside the point that Jennings wanted to impress on Scott. It’s that his policies have condemned thousands of Floridians to needless sickness and death for want of the Medicaid expansion money. The spiteful defunding of Planned Parenthood will make that worse.

The name she called him hardly seems too strong for that.