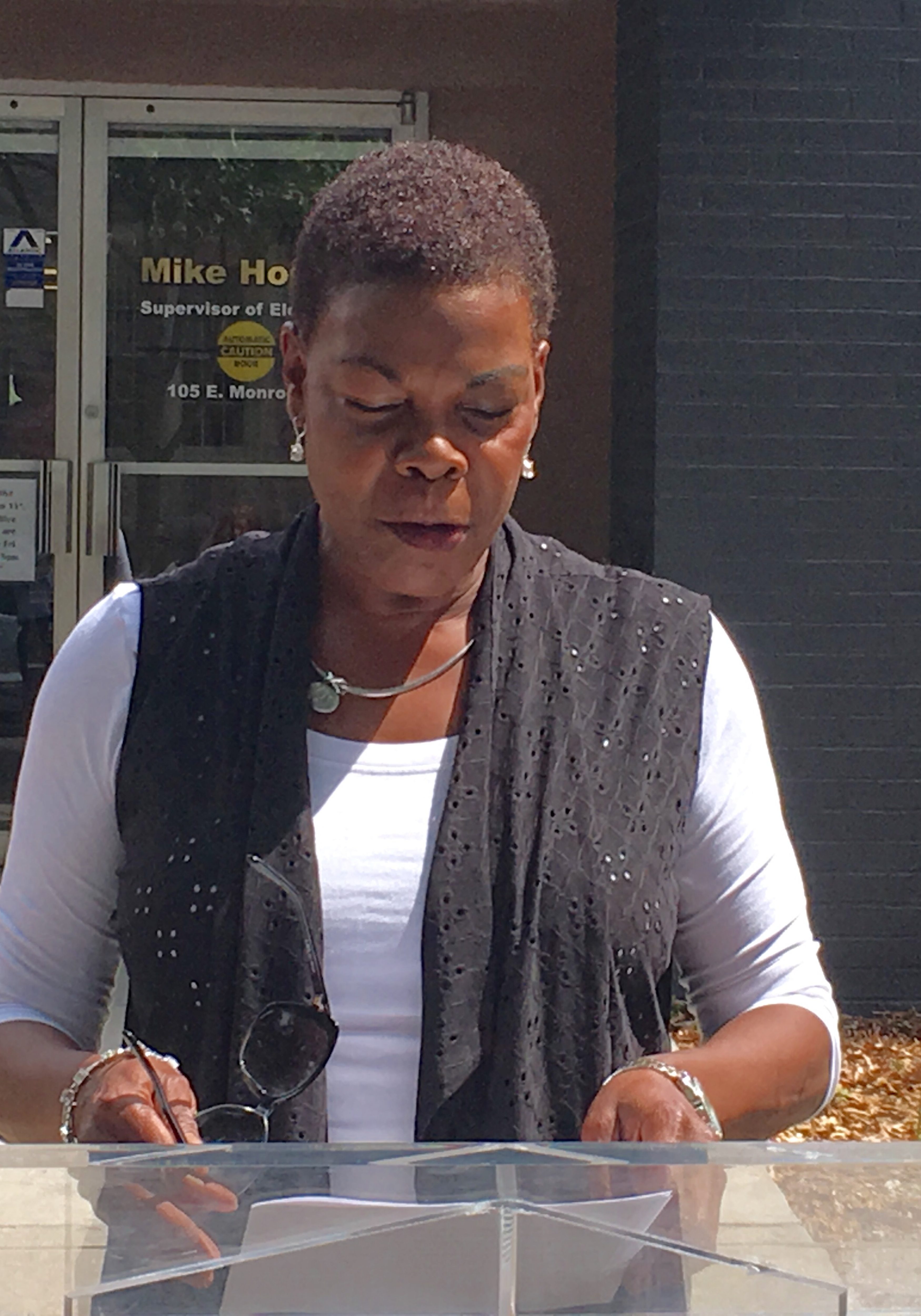 On Monday, the New Florida Majority and allies, including a state senator, held a press conference in front of the Duval County Supervisor of Elections office to protest closed primaries in the 4th Judicial Circuit races for public defender and state attorney.

The biggest name of those allies, Sen. Audrey Gibson, noted drily that “the [television] cameras didn’t roll for us,” before observing that of 19 judicial circuits in the state, two of the three races closed by write-in candidates included Duval County.

Gibson, currently running unopposed for re-election to the state senate, noted that the suspicious closing of the primaries represented “colluding” to silence non-Republican voters.

Gibson, observing that the “Men Only” slogan for Clay County divorce lawyer Kenny Leigh, the write-in candidate for state attorney whose paperwork was filed in Tallahassee by the campaign manager of Republican incumbent Angela Corey, was “troubling in itself,” wondered if Leigh’s concern would extend to minority men “unjustly silenced” by the closing of the primary.

As well, Gibson urged that public defender and state attorney races be non-partisan.

Lee Harris of the African-American Ministers Leadership Conference similarly observed the closing of the primary in the state attorney’s race was an “example of how to disenfranchise,” a use of “old tactics” that disproportionately impacts communities of color not predisposed to voting Republican.

Kristellys Estanga of the Jacksonville Young Democrats, when asked why the Democrats failed to field a member of their own party in opposition to the Republican incumbent, noted that she couldn’t speak for the Democratic Executive Committee.

Corey’s campaign manager Alexander Pantinakis claimed earlier this month that “I received and submitted Kenny Leigh’s documents on Thursday, May 5 solely in my capacity as the Duval County Republican State Committeeman” and filed Leigh’s paperwork as “a proponent of ensuring that only registered Republicans select Republican nominees for office and would question any Republican candidate who would reject that idea.”

The question of intra-party discipline on that issue is still up in the air, with the Duval GOP poised to elect a new chair at Monday evening’s meeting, and it being that chair’s prerogative to follow through on discipline.

Wes White, who called the closing of the primary a “Jimmy Crow” tactic, was not present at the protest, although one of his petition collectors, R.L. Gundy, was among those assembled at the Monday media event.

Gundy claimed African-Americans would be changing parties to vote Republican in August, though the precise number of them was not known.

Such a party change, of course, precludes new Republicans from voting in closed primaries on the Democratic side, including the one that Sen. Gibson will be in.