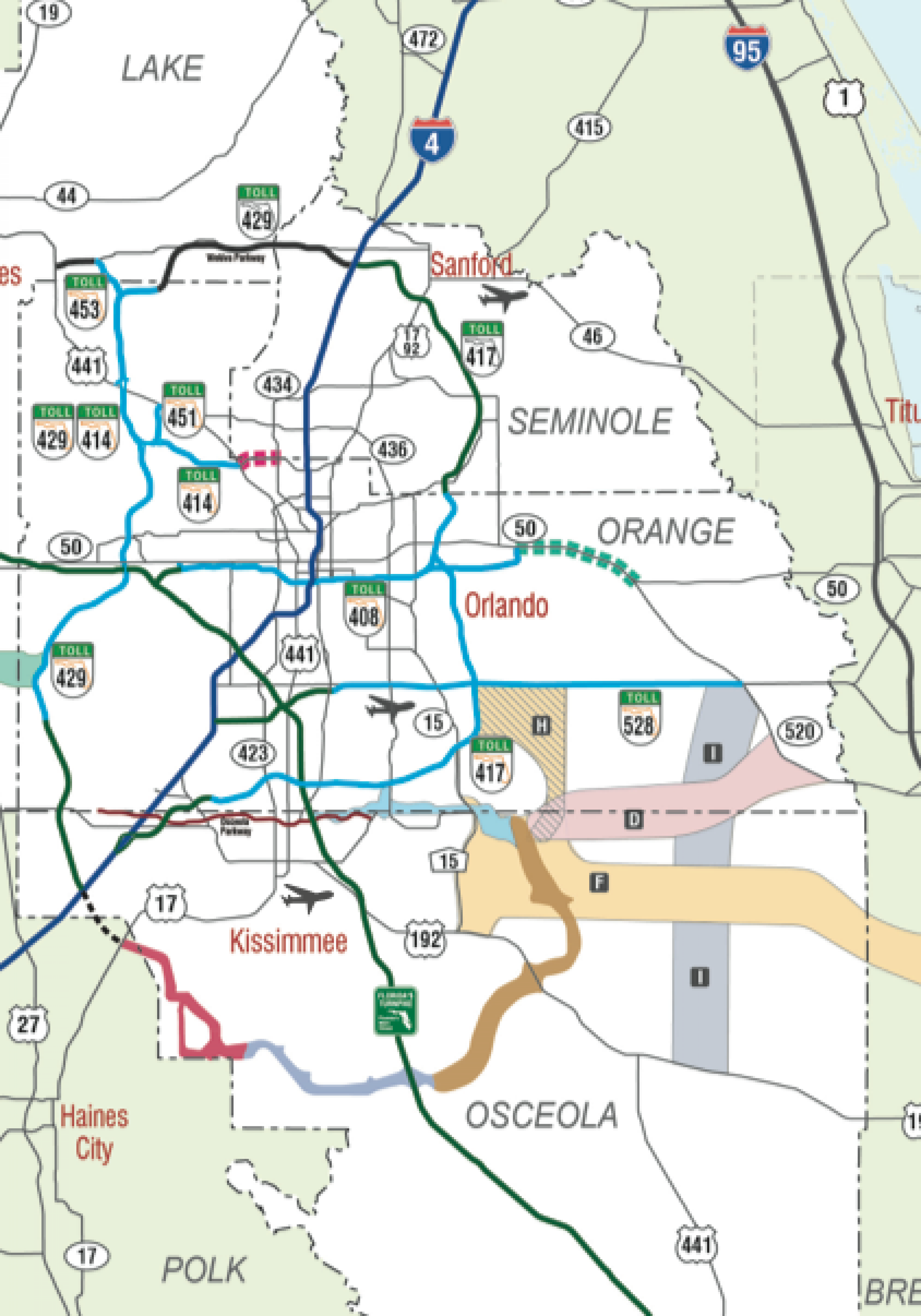 Come 2040, Central Florida could see another layer of toll roads south and east of Kissimmee and east of Orlando, opening up vast, now-rural swaths to new limited-access highways and potentially to growth.

The Central Florida Expressway (CFX) Authority has adopted a new long-term master plan that starts with a $2 billion, five-year work plan for immediate highway needs, all already-planned improvements to existing roads. And then it looks out to a future could involve as many as a dozen new highways costing up to $9 billion.

The “Visioning+ 2040 Master Plan” has been in the works and public debates over a year. And many of the proposals have been talked about by the CFX Authority and the neighboring Osceola County Expressway Authority for years before that. The blueprint was adopted last week by the CFX Authority’s Board of Trustees.

Yet the new vision is about more than roads. The plan taps into some of the long-range development concepts for the Orlando area, some of them enormous, and some of them controversial.

Included are plans to extend State Road 408 — the East-West Expressway — eastward eight miles through the town of Bithlo along the State Road 50 corridor. Also included are four or five new highways that would crisscross through the Deseret Ranches region of east Orange and Osceola. That area has always been cattle country, but the Mormon Church has talked about developing a community of hundreds of thousands.

“About $6.5 billion to $9 billion could be needed to fund the 12 identified new expressway expansion projects, each of which require further analysis,” the report states. “The majority of these candidates are located in the projected high-growth areas of Orange and Osceola counties. CFX could take the lead in moving these projects forward or provide resources and support to our regional partners.”

In some ways, the plan prepares for the possible CFX Authority merger with the Osceola County Expressway Authority. At the least, the document incorporates both agencies’ long-term plans into one vision, so they may be coordinated over time.

Nothing in the plan projects highway toll increases to pay for it all, but the risk exists. The authorities’ construction plans tend to be more constricted by the agency’s bonding capacities. And unanticipated toll increases have tended to be pushed through when bond ratings became vulnerable.

The proposals demonstrate the long-running tension in Orlando between building roads to accommodate traffic that’s already there or already expected, versus fears new roads will only attract more development and more traffic.

In some cases, such as a proposed extension of State Road 414 to connect Apopka to Maitland, such pressures are unlikely, because most of the area already is developed and traffic already is overwhelming.

Yet others, such as the East-West Expressway extension plan, could plow right into already-existing, hot, public disagreements.

That expressway extension could bring traffic relief to one of the most congested areas of Central Florida, south and east of the University of Central Florida, where S.R. 50 traffic is notorious. And more is coming, as more than 4,000 proposed new residences are approved.

Yet the highway, costing a projected $600-$800 million, would bring high-speed commuting through the rural area east of the Econlockhatchee River. Environmentalists and controlled growth advocates thought they had long-ago established, with Orange County political support, that river to be a Maginot Line against development. And development there now is almost all controversial.

The CFX Authority and the Florida Department of Transportation already have conducted preliminary engineering planning for that route, but it may have hit a snag. Last week the CFX board was informed the state is not certain it can provide the right-of-way needed along S.R. 50, according to the CFX.

The same public tension is possible on a far greater scale farther to the south. In the region of southeast Orange and northeast Osceola, the Church of Jesus Christ of Latter-day Saints owns more than 200,000 acres and has operated the land, known as Deseret Ranches, as working cattle ranches for generations.

But the church has signaled a long-term interest in developing the area into a huge city later in this century. Peripheral tracts, including a 24,000-acre project being pursued by the Tavistock Development Co. on Mormon land just west of the ranches, already are being planned for development and roads.

The CFX Authority plan envisions the potential need for a $1.2-$1.7 billion, 30-mile east-west highway stretching from Lake Nona through Deseret to I-95 near Melbourne, and another $720 million to $1 billion, 18-mile highway stretching to State Road 520 west of Rockledge.

There also are plans for several north-south toll roads through the area.

And that does not include the Osceola County Expressway Authority’s plans for a half-loop, tolled expressway that would start, on the west end, at I-4 near Walt Disney World, head south and east around Poinciana, Kissimmee and St. Cloud, and then north into the Deseret region.

Since starting the public engagement process in April 2015, the CFX team has met with local cities, counties, chambers of commerce and civic groups to define how best to collaborate over the next 25 years. In all, CFX held over 80 meetings, presentations and events that spanned four counties and 26 municipalities, the agency reported.

“Central Florida’s population could grow by more than 50 percent by 2040, the Master Plan horizon year. Employment and tourism also are expected to increase dramatically during the next 25 years,” the report states. “The existing system will serve a substantial portion of the traffic associated with the projected growth. But new expressway projects providing additional travel capacity will be necessary to accommodate this growth.