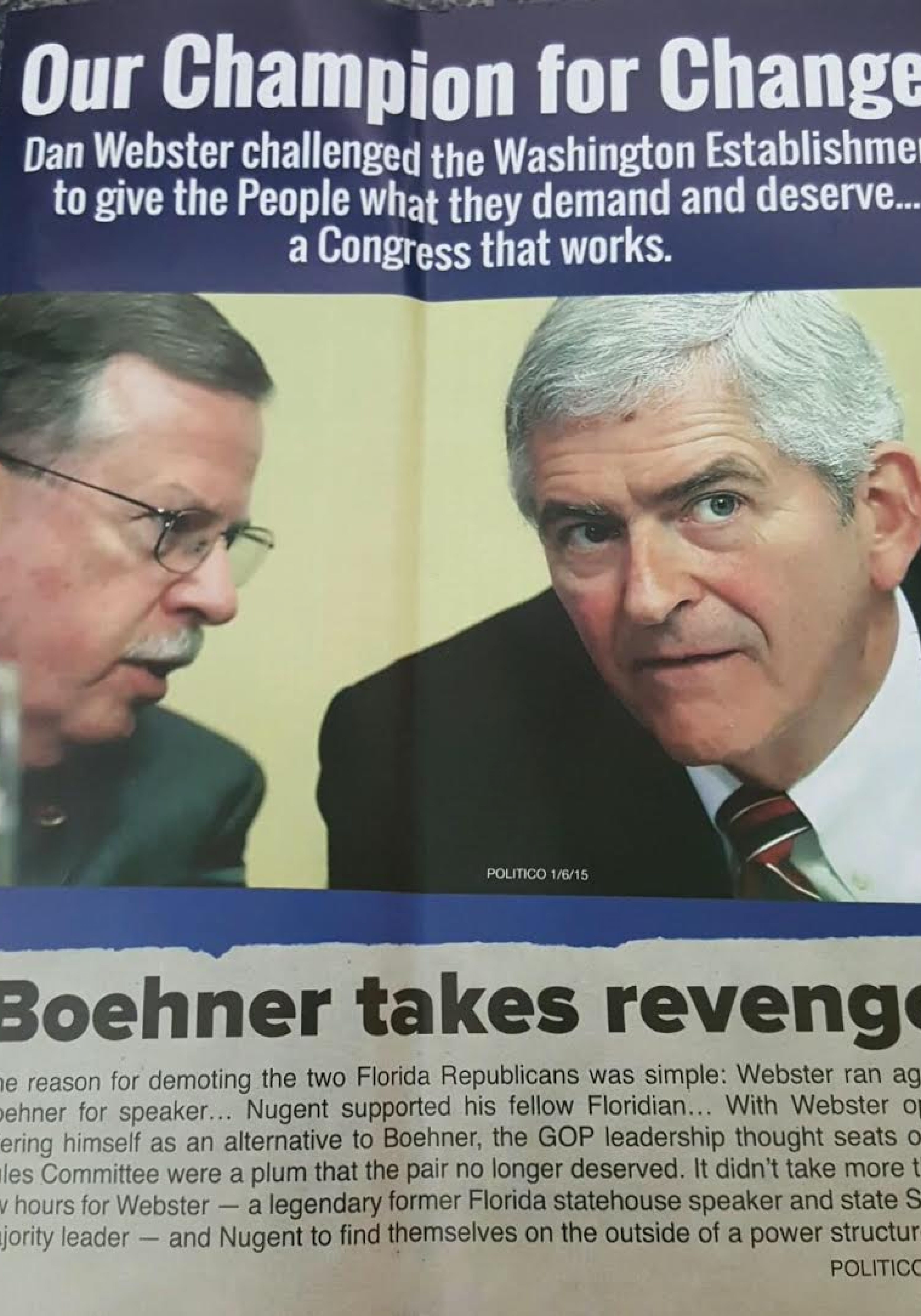 Spring Hill-based Congressman Rich Nugent is fighting mad about a Daniel Webster campaign mailer that uses his likeness without his support or consent.

“It’s been brought to my attention that Dan Webster used my likeness in a campaign mailer to imply my support for his candidacy here and I don’t appreciate it,” Nugent said in a statement issued out by the Justin Grabelle campaign. Grabelle and Webster are involved in an intense Republican primary to succeed Nugent, who announced last year he would not run for reelection in the 11th Congressional District in Florida, which also encompasses Hernando, Citrus, Sumter and Marion counties.

The mailer depicts Webster and Nugent sitting next to each other with the headline, “Our champion for change.” Underneath the photo it quotes a January 6, 2015 Politico story called, “Boehner Takes Revenge,” when the former GOP House Speaker demoted both Florida Republicans from the House Rules Committee in retaliation for Webster challenging him for his House Speaker’s position, with Nugent being one of the few Republicans to back him.

“I want to say again for the record that I am supporting Justin Grabelle for Congress 100 percent,” Nugent added. “Justin has invested years in this community, he’s raised his family here, he knows the people and has earned this community’s support the old-fashioned way. Dan Webster is only moving here to run out of a belief that it’s easier than running in his own area of Orlando.”

Webster has represented the Orlando area in the House of Representatives since 2010, but decided earlier this year he would not run for re-election when his chances for another two-year term dimmed substantially after his 10th Congressional District seat was substantially reconfigured through redistricting. In February, he announced he would run in the 11th Congressional District, which absorbed much of his Republican base from CD 10.

It should be noted that while the Grabelle campaign is fine making Webster something of a carpetbagger for opting to run in the CD 11 race,  Grabelle himself does not live in the district.

The Webster campaign is defending the mailer, saying it never says anything about an endorsement from Nugent.

“The mailer does not imply endorsement, it only repeats the fact that Rich Nugent voted for Dan Webster for Speaker of the House,” says spokesman Andrew Terrell.

Grabelle served as Nugent’s chief of staff until last fall, when he stepped down after declaring his candidacy to replace Nugent. He was the first Republican out of the gate to announce he was running for the seat, and Nugent endorsed him almost immediately.