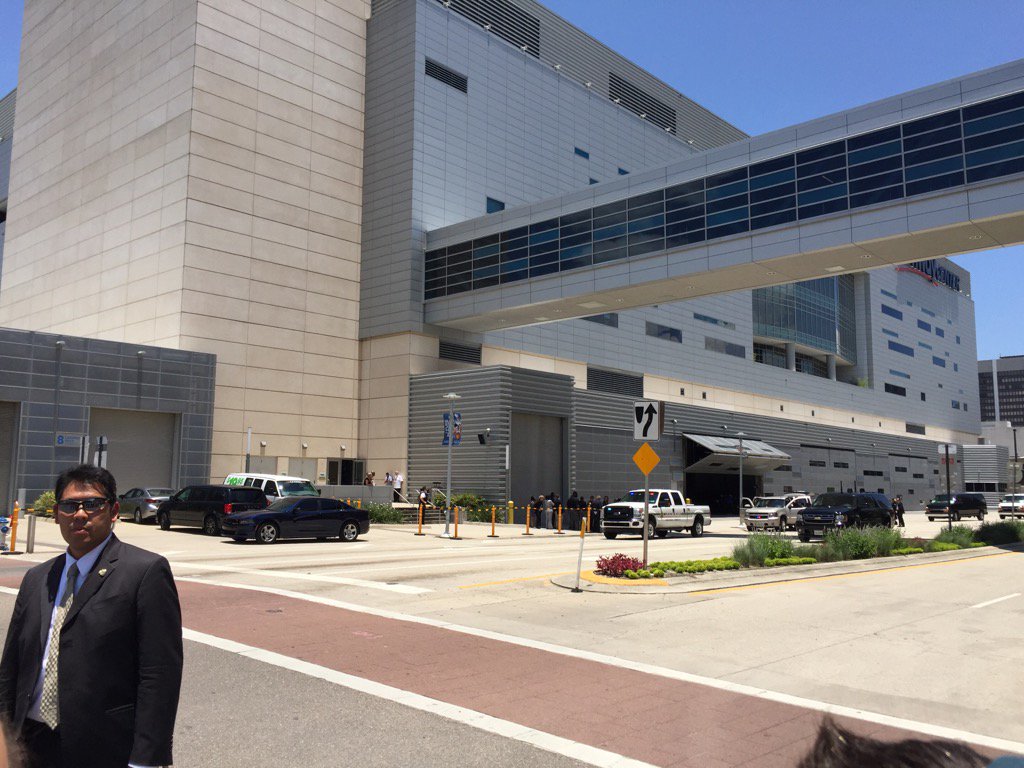 Air Force One touched down at midday in this grief-stricken community, where Obama planned to spend a few hours meeting in private with families of the 49 victims, with survivors and with local law enforcement officials who responded to the shooting. He planned to emphasize his solidarity with Orlando’s gays and lesbians but planned no major speech or call to action.

The low-profile visit reflected the challenge for the president to find something meaningful to say about an attack that has stoked a wide mix of fears about terrorism, guns and violence against gays. Even as the families of the victims bury their loved ones, it’s unclear what led a 29-year-old Muslim born in New York to open fire in a gay nightclub early Sunday where he may have been a frequent patron.

White House press secretary Josh Earnest said Obama would deal with the ambiguity in the Florida shooting by focusing on the victims.

“The president’s visit to Orlando has nothing to do with the individual who perpetrated this terrible attack,” Earnest said Wednesday. He said Obama intended to tell residents “that they’re not alone, even as they endure what surely have been several dark nights.”

The White House released few details in advance about Obama’s trip, which aides said was hurriedly arranged in a fraction of the time usually required to plan a presidential trip. But Obama planned to use the visit “to make clear that the country stands with the people of Orlando, stands with the LGBT community in Orlando, as they grieve for their loss,” Earnest said.

The president’s call for rejecting bigotry against gays and lesbians is complicated by the possibility that the gunman, Omar Mateen, may have been wrestling with his own sexuality. The FBI has been looking into reports that Mateen frequented the nightspot and reached out to men on gay dating apps.

Obama intended to focus on making the visit a moment of solidarity.

Florida Gov. Rick Scott, a Republican frequently at odds with Obama, greeted the president on the tarmac upon his arrival. Florida Sen. Marco Rubio, also a Republican, traveled with Obama from Washington, along with Rep. Corrine Brown, a Democrat who represents parts of the city. Vice President Joe Biden and Sen. Bill Nelson, D-Fla., joined Obama on the tarmac.

The investigation and makeshift memorials in Orlando have seemed a world away from Washington and the presidential campaign, where initial horror has quickly given way to a vicious political brawl.

Presumptive Republican nominee Donald Trump has expanded his call for temporarily barring foreign Muslims from entering the U.S. – even though the attacker was an American – and said the president “prioritizes” America’s enemies over its people. In a rare bout of public anger, Obama denounced both Trump and the GOP leaders who are still supporting Trump. Many of those Republican leaders also denounced Trump’s rhetoric.

In Congress, the attack has spurred another bitter fight over gun control, exposing deep frustration among supporters of stricter gun laws that no level of mass casualty seems to be enough to force gun control opponents to reconsider.

Democratic Sen. Chris Murphy, whose state of Connecticut shouldered the killing of 20 children in Newtown in 2012, undertook a roughly 15-hour filibuster that lasted into the early hours of Thursday. As he yielded the floor, Murphy said GOP leaders had committed to hold votes on expanded gun background checks and a ban on gun sales to suspected terrorists.

In an unexpected twist, Trump said he planned to meet with the National Rifle Association “about not allowing people on the terrorist watch list, or the no-fly list, to buy guns.”

For Obama, the trip to Orlando was an unwelcome return to one of the most difficult roles a president must fulfill: comforting the nation at times when few words seem capable of providing much comfort. Obama has lamented the frequency with which he’s had to perform that duty, calling his inability to enact stricter gun laws the biggest frustration of his presidency.