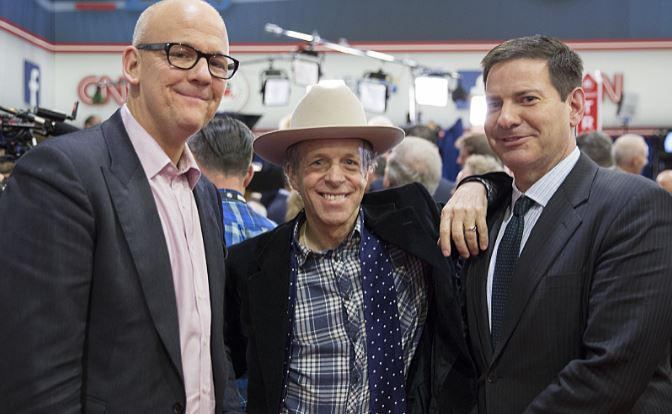 For almost 40 years, “Inside the NFL” has been able to capture the attention of football fans despite airing several days after the action on the field has occurred.

While the basic elements of the show are the same as any other sports recap show, featuring highlights of the week’s games and discussion of events around the league, the fact that there are no commercials allows the panel to discuss subjects at length without the normal network time restrictions. In other words, in a sports news environment where ESPN’s SportsCenter is ubiquitous and other outlets’ highlight shows hammer viewers over the heads with one catchphrase-driven recap after another, “Inside the NFL” works because of its stately pace.

Of course, having the highlight reels produced by NFL Films, with its lavish production values, also makes “Inside the NFL” must-see TV.

Watching the latest episode of Showtime’s “The Circus,” I kept thinking I was watching a more compelling version of “Inside,” except instead of football, the game at the center of the show is politics.

Like “Inside, “The Circus” benefits from its all-star panel — Bloomberg reporters Mark Halperin and John Heilemann and strategist Mark McKinnon — being able to take a breath and put the Most Important Week Ever in much-needed context. The show offers the same highlights as “Morning Joe” and “Meet the Press,” but it’s able to tell us, like “Inside the NFL” does with football, which highlights really mattered and which didn’t. The show has the urgency of being shot in real time, but it is assembled and produced after all involved have had time to digest the full scope of the previous seven days.

And what a week it was that the latest episode of “The Circus” had to cover, beginning with the FBI’s decision to recommend no prosecution in the controversy surrounding Hillary Clinton’s use of a home-brewed server and ending with the tragic shooting of police officers in Dallas. It was not a slow news week. Yet for Halperin, Heilemann, and to a lesser extent McKinnon, who was caught away from a television during FBI Director James Comey‘s press conference, there is no hyperventilating. They continue to give the sense that this presidential campaign will be a long season.

If there’s one element missing from “The Circus,” it’s disagreement between the two lead reporters. Whether it’s over a round of drinks at a New York restaurant or during a very meta-clip of them during “Pardon the Interruption,” err I mean, “With All Due Respect,” (their daily show for Bloomberg), Halperin or Heilemann rarely suggest to the other that, well, they’re full of crap.

As someone who talks politics with hundreds of other people who enjoy talking about politics, I find myself disagreeing as much as I concur — even with those I consider allies or simpatico.

It would be refreshing to see one of the two “Game Change boys” say to the other, “No, you’re wrong about that.”

In one way, it really doesn’t matter what Halperin, Heilemann, or McKinnon have to say because the visuals of “The Circus” are alone worth tuning in. Showtime gives the 2016 presidential campaign trail the same treatment NFL Films gives Drew Brees or Lambeau Field. Hillary Clinton never looked so good as she does during one of the slow-motion shots of her on “The Circus.”

To extend the football metaphor further, I worry that “The Circus,” which now must focus on Clinton and Donald Trump, could turn into an episode of “Inside the NFL” that focused only on the Dallas Cowboys and New England Patriots. Those two teams are probably the most recognizable — and least liked — franchises in the league, just like Hillary Clinton and Donald Trump are the most recognizable — and least liked —politicians in the country. Early episodes of “The Circus” were fun to watch because viewers got to see a side of Ted Cruz that rarely made its way into the mainstream media. Viewers got to meet the energetic Jeb Bush they kept hearing rumors about but never saw on the campaign trail. Viewers got to see all of this and a dozen more characters running for president who, while unable to win elections, were interesting enough to fill up 30 minutes of TV programming.

Now all we are left with is Clinton and Trump, the Tom Bradys of American politics.

nextHD 61 candidate Sean Shaw on guns, working with the GOP, and getting 'The Talk'