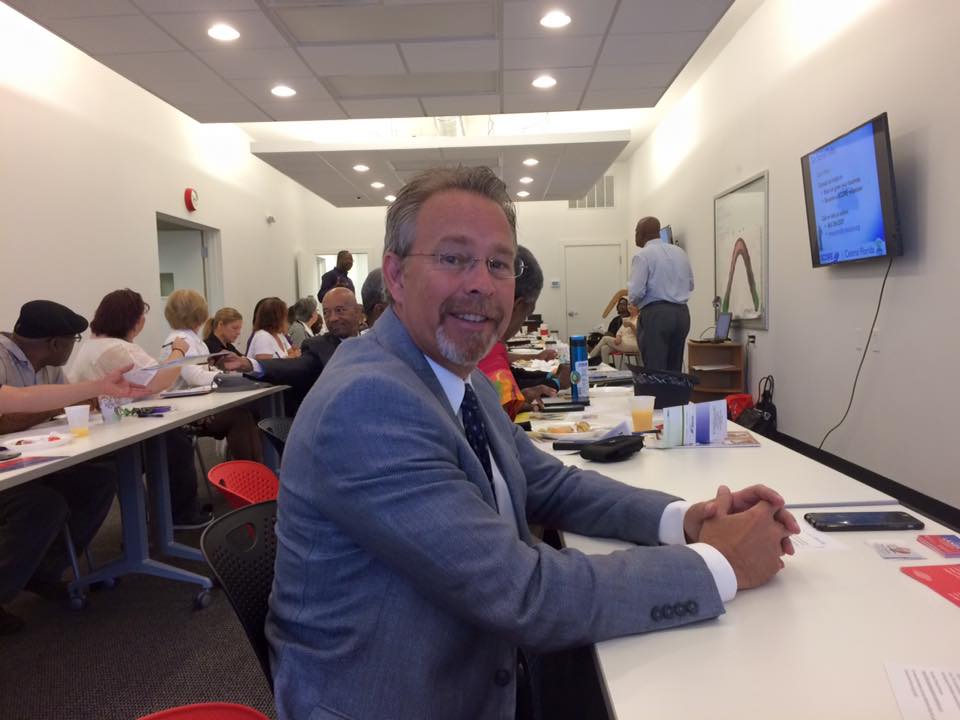 Lutz business consultant Jim Lange is learning the hard way why incumbent members of the House of Representatives get elected on average more than 96 percent of the time.

“Overwhelmed,” “frustrating,” and “humbling” are some of the words he uses to describe life on the campaign trail as an unknown challenger with limited campaign funds against a well known incumbent.

Three months to go before the general election, Lange is feeling extremely humbled about his prospects. As he began the campaign, he says he thought he could do a “forensic audit” to investigate why two previous Democrats – Lori Edwards in 2010 and Alan Cohn in 2014 – came up short against Ross in the district. He also said he wanted to assess the Democratic Party.

What he said he found out is that there is no Democratic Party.

“There is a collection of Democrats, and organizations, but as far as an orchestrated institution, I found that what I thought would exist for me, it just doesn’t exist for me, or really for the average candidate,” he said in a phone interview conducted on Tuesday. “There’s no bench. They don’t groom you. A lot of those things have been frustrating to me, and humbling, because I maybe thought more of myself than I should have.”

Lange says his disillusionment with the establishment began at the top, with the Democratic Congressional Campaign Committee (DCCC), which he says immediately paid little attention to his candidacy because they didn’t believe he could raise any significant amount of money to pose a threat to Ross.

On that count, that prediction has been accurate. At the end of June, Ross had raised more than $970,000 and had more than half-a-million dollars in cash on hand. Lange has raised just a little more than $14,000, and has less than $2,000 cash on hand.

He’s equally critical of Debbie Wasserman Schultz’ leadership at the DNC, and said that Allison Tant and the Florida Democratic Party isn’t designed to help a federal candidate like himself, “so she becomes a non-entity to me.”

Lange does praise the heads of the local Democratic Executive Committee offices in Polk, Lake and Hillsborough Counties (all of which have a piece of CD 15), but acknowledges the obvious – that they have few financial resources and also aren’t set up to aid federal candidates.

“But they’re good people, they try hard, and I think they have a real desire to improve,” he says.

One person who disagrees with Lange’s attitude is the aforementioned Cohn, who raised nearly $400,000 in his unsuccessful bid to defeat Ross in 2014.

“What we did was hired professional, experienced people. There are systems in place. There are things to do,” Cohn says, adding that he had staff, interns and even his wife spend countless hours researching and contacting potential donors all over Florida. “We worked 12 hours a day, 7 days a week. We raised a huge amount of money that way.”

Cohn said when he ran in 2014, the district was considered to have only six percent more Republicans than Democrats, meaning if one could get their message out, a Democrat could win. “You don’t win a race by just going to Democratic meetings. You have to reach voters who are not highly identified as being a Republican or Democrat.”

For the past six years, Lange has ran the Haiti Recovery & Development Co., a nonprofit he created shortly after learning about the devastating earthquake there that killed nearly 300,000 people more than six years ago. He says getting involved with Haiti helped get him motivate on global issues, but he always knew that running for any type of political office would be a difficult challenge. He admits to being a bit naive, believing there would be more institutional support. Then again, a quote he said this past winter does look overly optimistic in retrospect.

“I have no illusions that I’m going to be able to match dollar for dollar against an incumbent, a Republican who’s a member of leadership,” he told this reporter in late February. He did predict that once the establishment viewed him as a “legitimate risk” to Ross’ chances for re-election, “this area will flood with money.”

Meanwhile, the only interaction he had with Ross was at a recent “hob nob” in Lakeland, where Lange himself didn’t speak. He’s not optimistic that Ross will deign to offer to debate him (Ross successfully underwent heart surgery this week to correct a birth defect).

Despite his melancholy mien, he says he’s not unhappy with the journey that being a candidate for congress has offered to him.

“I promised you when I started running for office to do the best I could to be an honorable person and be the same person,” he says. “So thankfully, this is an unsual year for politics, and with the down balloting, I have an opportunity to at least be in the equation, nobody knows what’s going to happen here through November.”

previousPoll: John Rutherford is cruising to victory in CD 4 race