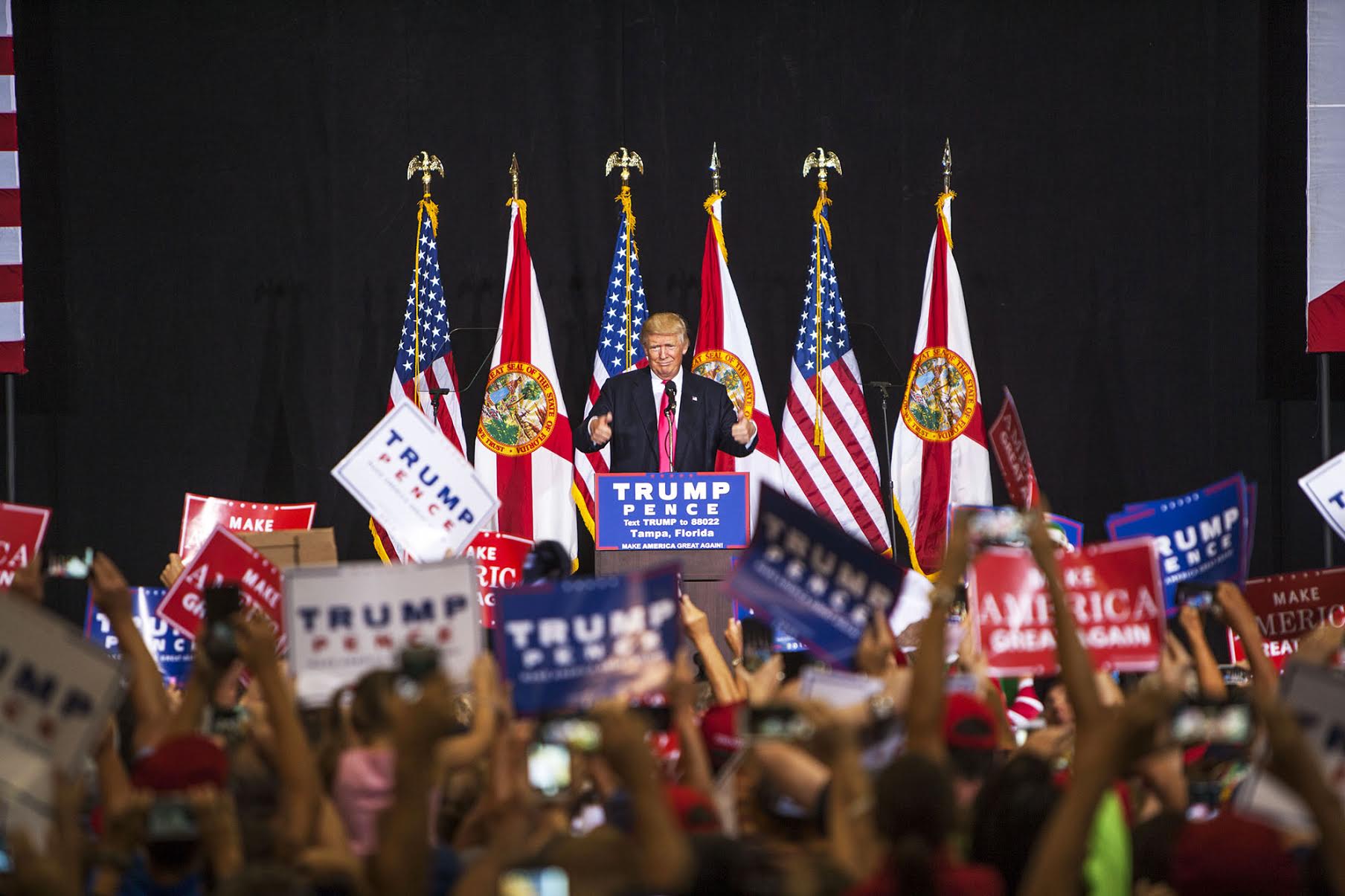 Donald Trump returned to Tampa Wednesday afternoon, the fourth time he’s appeared in the Cigar City this year, and another visit inside Florida’s Interstate 4 corridor, still considered the most crucial area for a presidential candidate to win to take Florida’s 29 electoral votes in November.

Appearing over an hour late before several thousands of people at the Florida State Fairgrounds, the GOP presidential nominee’s speech peaked at about the 40 minutes, but then kept on going for another 20 minutes, as he expounded on the evils of Obamacare and the Iranian nuclear deal.

As has been the case since he brought on longtime GOP strategist Kellyanne Conway and Breitbart news chief Steve Bannon a week ago, Trump spoke from a teleprompter, though he improvised throughout.

Trump delved deeper into his plan for the economy, laying out a a seven-part plan he said would create millions of new jobs. Among the highlights would be withdrawing from the Trans-Pacific Partnership, which has not yet been ratified, renegotiating NAFTA with Canada and Mexico (“If we don’t get the deal we want, we will walk away,” he said), and instructing his U.S. Trade Representative to bring trade cases against China, both in this country and at the World Trade Organization. “China’s unfair subsidy behavior is prohibited by the terms of its entrance to the WTO, and I intend to enforce those rules,” he said, adding that, “If we take these steps, jobs and factories will come roaring back into our country.”

“I will be the greatest jobs president that God ever created,” he added at one point, showing that he hasn’t lost his knack for hyperbole. “The greatest.”

Trump also once again set aside a portion of his speech to ask for blacks and Latinos — two demographic groups he’s polling horribly with — to give him a chance in November, because — as he has inimitably said over and over in the past week to blacks in particular — “What the hell do you have to lose?”

“To those suffering and hurting and the people left behind, I say: ‘Vote for Donald Trump,'” as the crowd cheered. “What do you have to lose? It cannot get any worse, and believe me, I’m going to fix it, I’m going to make it so good. So, to the African-American vote, great people. To the Hispanic vote, who have absolutely been treated terribly. I say; “What do you have to lose?'”

And he continued with the riff that under a Trump presidency, blacks won’t have to fear being shot as they leave their homes. “I say to the African-American parent, you have a right to walk down the street in the inner city, without having your child or yourself shot. And that’s what’s happening.”

He repeated the same refrain to the Hispanic voter. “The Democrats and Hillary Clinton‘s policies, once she gets your vote … you know what she does; ‘Bye-bye folks, see you in four years.'”

Clinton was mercilessly attacked thought the afternoon, before Trump even hit the stage a little after 2 p.m. No one was more aggressive than former New York City Mayor Rudy Giuliani, who in a lengthy speech preceding Trump, leveled a number of outlandish claims, saying Clinton was anti-police and anti-military, and claiming there were no uniformed police officers at the Democratic National Convention in Philadelphia (there were).

Trump did appear to go provocative when he said that Clinton “would rather give a job to an illegal immigrant than to an unemployed Hispanic citizen — or to a veteran.”

And regarding the reports of Clinton in her role as secretary of state giving access to those officials who donated to the Clinton Foundation, Trump said, “It’s impossible to tell where the Clinton Foundation ends and the State Department begins. Then she lied about her crime to Congress over and over again. Bill Clinton essentially called the FBI Director — James Comey — a liar, when he said the FBI director was spouting “bull.” They don’t realize that they owe the FBI director their political lives for refusing to recommend a prosecution for Hillary Clinton’s many crimes. He saved Hillary Clinton from facing justice for her illegal and corrupt actions.”

Trump’s speech comes at a time when he’s trying to restart his campaign that had gone badly off the rails after his acceptance of the Republican Party’s nomination at their convention in Cleveland. All of his problems have been self-inflicted, as he’s shot off at the mouth during speeches, thus the need for him to stay on message with a teleprompter.

Tampa resident Greg Ramapkern says of Trump’s outrageous comments, that “of course, you have to leave it at home sometime.”

Having worked in construction his whole life, though, Ramapkern says he’s never been bothered by Trump’s attitude. “In construction, if you let anybody step on you, you’re dead, so you have to have that strong attitude,” but he adds about Trump that “he has to be more moderate.”

Lakeland resident Dave Constable says he does worry about Trump’s verbal excesses, saying, ” I do worry about that. As a leader you’ve got to be diplomatic, You’ve got to say the right thing. He speaks from the heart, and he says what the American people are thinking a good portion of the time, but he’s gotta tone it down a little bit, and be a little bit more presidential.”

Jennifer Wingfield from Clearwater says she likes Trump because “I want our country back.” Regarding attempts to change his tone on immigration, she says, “I think he’s getting pressure and that’s why he’s not really changing his stance. I can’t really imagine him changing his stance because he’s pretty strong in his stances, and I think at this time that at this point in the game maybe he really shouldn’t be talking about all of that, he should really be about trying to win the presidency, and get in there, and then do what he needs to do.”

Trump traveled to Mississippi after today’s speech, where he’s scheduled to speak in Jackson.