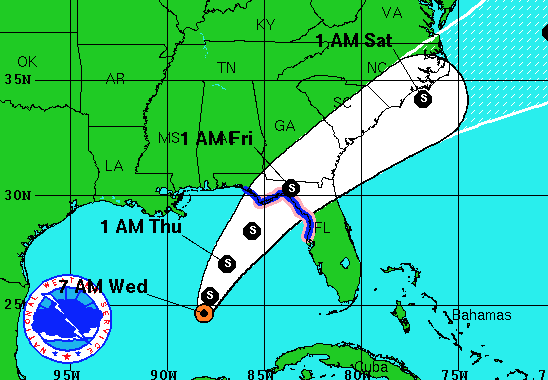 Gov. Rick Scott expanded a state of emergency Wednesday to include nine additional counties as Florida braced for Tropical Storm Hermine to hit the Gulf Coast.

His executive order brought 50 of Florida’s 67 counties under the storm watch.

“We are in constant communication with local communities, and we stand ready to respond to any impacts, especially as we anticipate that the storm could become a hurricane before it reaches landfall tomorrow,” Scott said.  “As we brace for this storm to impact Florida, I will be at the SEOC in Tallahassee tomorrow to continue to closely monitor it.”

He referred to the State Emergency Operations Center, a cavernous facility from which officials will monitor developments and coordinate the state’s response to Tropical Storm Hermine, forecast to make landfall on Thursday.

“At this time, we expect a storm surge of upwards of six feet in some parts of our state. We also anticipate total rainfall amounts of five to 10 inches of over portions of Northwest Florida and isolated tornadoes,” he said.

“It is crucial that every Floridian has a plan in place to ensure that their families, homes and businesses are fully prepared,” he said.

Scott referred residents to flgetaplan.com, where they can find suggestions.

Scott began a tour of the state’s preparations Wednesday morning in Tallahassee and scheduled additional briefings later in the day in Jacksonville, Gainesville, and Southport, in Bay County.

“This state knows what to do, but you have to do your part,” Scott advised Floridians.

That means planning for power outages, collecting a three-day supply of water, and preparing to seek shelter for families and pets, he said — and make sure you own a working battery-powered radio.

Florida has suspended aid to flood victims in Louisiana in case resources are needed at home. Officials have already consulted with federal disaster responders, and have prepared to shift food supplies at schools to evacuation shelters. Ports were “hunkering down,” one official said.

nextCorrine Brown after loss: 'You know they've been after me for years'