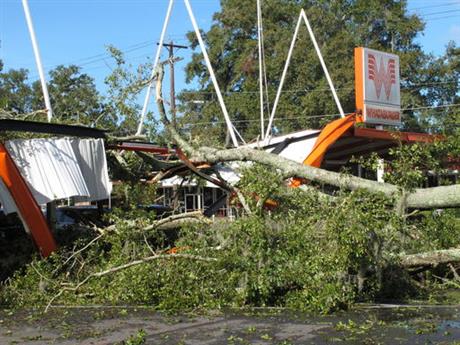 With tens of thousands of Tallahassee-area residents still without electricity two days after Hurricane Hermine struck the Florida Panhandle, the executive director of the Florida Municipal Electric Association confirmed that help from Florida Power & Light was turned down after sources inside two power companies told FloridaPolitics.com offers of assistance to the City of Tallahassee were rebuffed.

Tallahassee Mayor Andrew Gillum has been under fire from critics on social media for the city-owned utility’s response to the widespread loss of power.

Rumors have circulated throughout the city that Gillum:

— Made sure power to his own neighborhood and that of his political allies was restored first,

— Was turning down offers of assistance from other electric companies because their workers were not unionized, and

— Had politicized the overall response effort.

“It appears that the heat has driven some to speculate wildly about what help I have accepted or rejected on behalf of the city in our effort to recuperate from this storm,” Gillum wrote on his Facebook page Saturday night.

“And still others have suggested a Machiavellian attempt by me to surrender residents to my will by prolonging suffering and delaying any power from being restored — rendering them utterly helpless to my liberal agenda.

“Let me be clear,” he added. “We are happy to accept any help from any person or organization that is going to accelerate the speed at which we can safely restore power to our residents.”

That last portion of his statement—about accepting help from those who could “accelerate the speed at which we can safely restore power to our residents”—strikes us as a non-denial denial that the City of Tallahassee has turned away some offers of assistance.

Crews from Duke Energy and Florida Power & Light have been turned away by the City of Tallahassee Utilities, company sources say, not by Gillum, but by City Manager Rick Fernandez and Utilities Director Rob McGarrah.

What’s worse, one source says, is that FPL’s offer was never followed-up on by the City of Tallahassee.

As for Duke’s offer to help the city, Gillum “did not personally turn us down,” said the source inside the North Carolina-based company. “We were not taken up on any of our offers to the city utility.”

Supporters of Gillum say he has been working almost around the clock since the Category 1 hurricane came ashore and cut a path through Tallahassee’s famed canopy roads. They also point out that Gillum is hamstrung by Tallahassee’s weak-mayor form of government.

Tallahassee has a commission-manager form of government, with the city manager “oversee(ing) most City departments and administer(ing) the daily operation of the City,” according to the city’s website.

“The mayor is considered to be a ‘leadership mayor,’ ” a directly-elected position created by local voters in 1996. Before that, the mayor’s seat had rotated among the five sitting commissioners.

“The mayor is also considered the political leader of the government and is involved in dialogues and negotiations with county, state, and federal officials. Tallahassee’s mayor is not considered a ‘strong mayor’ because the position has no veto power and represents only one vote on the city commission.”

Of course, in times of crisis, city residents look to the top for answers to problems—especially when those problems involve getting the lights back on and the water running again.

In response to Gillum, mild-mannered lobbyist Gus Corbella wrote also on Facebook: “I was disappointed to read your latest update last night which dismissed criticisms of your response to Hurricane Hermine as ‘speculations’ made by Republicans who may differ with you politically.

“You are the mayor of all of Tallahassee, and responding in such a fashion to your constituents, who are going on over 60 hours plus without power, solves nothing and only worsens the situation,” wrote Corbella, who was chief of staff to Republican Senate President Jim King of Jacksonville.

Corbella said he and many others in Tallahassee want answers to why, “when private utility companies (FPL, Duke, TECO, etc) offered to help our city by sending trucks, crews and expertise, did you turn down their offers?”

Those are just the first of many questions that will need to be answered once the storm, both the physical one and the political one brewing, have passed. Other questions being raised:

— Why didn’t the City of Tallahassee Utilities request significant numbers of crews in advance of the storm (as other utilities did), as anyone who looked at a weather radar could see Tallahassee was in the cone of uncertainty.

— Why does the city think coordinating small handfuls of crews from Louisiana is better than getting bigger teams from in-state?

— When city officials turned down the help, did they honestly believe they couldn’t find work for the crews to do? The Tallahassee Museum posted on Facebook that the City had yet to fix a downed power line.

Barry Moline, the executive director of the Florida Municipal Electric Association responded to this writer’s Facebook post asking some of those questions. Here is Moline’s response:

“Did Mayor Gillum refuse an offer? What he did was work with his utility staff to determine how best to manage all the out of town crews. Tallahassee lineworkers have to split up their normal teams to direct the work with the out of town crews. The reason why is for safety—local utility people have to connect with the control center to make sure power lines are not energized—we don’t want anyone electrocuted; and to match the design standards of the Tallahassee utility. A standard exists for every single utility in the world. You have to supervise visiting utility workers to direct the restoration. Otherwise, the restoration could be done incorrectly and the work would have to be redone the next day.”

Note that Moline did not deny that the City of Tallahassee turned down help. In fact, what he did was explain why offers of assistance from other power companies were turned down.

On Friday evening, in a meeting called by Gov. Rick Scott, FPL’s president offered to send 575 restoration personnel from its Lake City service center, but the city’s utilities director said the city could not accept the help at the time. The company said its offer for assistance still stands, and remains ready to “lend a hand if the city determines it can use our help.”

On Sunday, the City of Tallahassee announced that an additional 150 workers from Gulf Power are on their way to aid in restoration efforts.

Many will ask why weren’t they already on the way.

***Update*** – Moline added a comment that probably won’t sit well with many, especially those without power.

Asked why Gulf Power is coming in now if there wasn’t a previous need for more lineworkers, Moline writes:

“Good point. FPL did offer, but they were tied up with their own restoration, and by the time they offered, there were enough lineworker crews in Tallahassee Friday night. Then they left the area Saturday morning. Tallahassee reassessed their needs Saturday afternoon, and took more crews finishing Gainesville’s restoration, then today took more Gulf Power crews when they finished restoration in Brunswick, Georgia. The issue with FPL was timing. First they were tied up, then left the area. What can Tallahassee do, when they leave the area? I’m not blaming FPL or anyone. The timing was just off.”

nextHillary Clinton to appear at USF in Tampa Tuesday