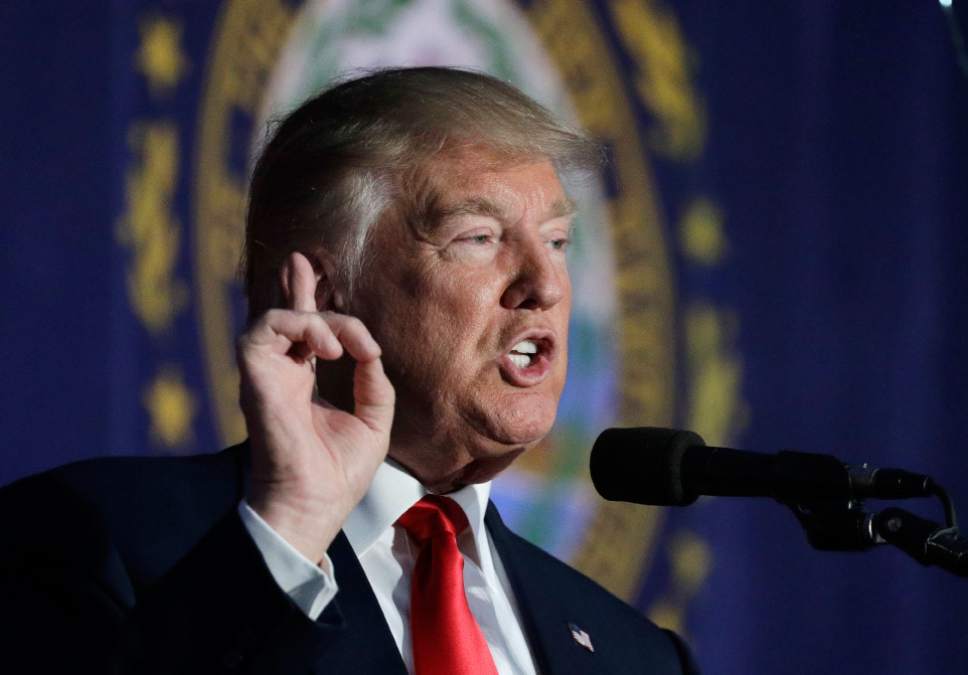 It was Trump’s latest effort to bounce back from Monday night’s debate performance, which has been widely panned as lackluster. In contrast, Clinton has delivered a mostly positive message in the days since her debate performance re-energized her candidacy.

Clinton is stressing that her plans will solve the kind of kitchen-sink problems facing American families — the high cost of childcare, mounting student debt burdens and unpaid family leave. Trump, though promising lower taxes and “jobs, jobs, jobs” for American workers, has intensified the dire warnings and personal attacks that have defined his outsider presidential bid.

He took it a step further on Thursday.

That was a reference to Bill Clinton. After an investigation by an independent counsel, the House approved formal impeachment charges in late 1998 in connection with President Clinton’s testimony about his affair with a White House intern, Monica Lewinsky, and other matters. He was acquitted of the impeachment charges by the Senate.

Trump’s team said he had been prepared to bring up the Lewinsky scandal during Monday night’s debate but decided otherwise because the Clintons’ daughter, Chelsea, was in the room. Trump did not bring up Lewinsky by name on Thursday.

“I want this election to be about something, not just against somebody,” she said in Des Moines.

Asked Thursday about the possibility that Trump would raise her husband’s infidelities, Clinton said, “He can run his campaign however he chooses. That’s up to him. I’m going to keep talking about the stakes in this election.”

Her aides argue that a summer barrage of attack ads against Trump, along with the candidate’s own controversial statements, have driven his negative ratings to historic levels, leaving them little ability to do more. That leaves her the choice of trying to win over undecided voters and Republicans concerned about Trump by emphasizing a positive vision for America.

Indeed, at her Des Moines rally, Clinton offered a hopeful message to contrast with the doom-and-gloom themes that have been staples of Trump’s campaign. As she often does, she recounted her own background of working on children’s issues and her father’s struggles as a small businessman.

“I know so much of this campaign has been about, you know, whatever my opponent said and who he attacked and who he denigrates — and the list is long,” Clinton said. “But it’s not about that, it’s about you. It’s about your families and your future, and each of us should be telling you what we intend to do in the job.”

With Election Day less than six weeks away, early voting already is underway in Iowa and some other places. Trump and Clinton remain locked in a tight contest.

Trump has included hopeful lines in his own remarks. But the New York businessman has not deviated far from his aggressive approach defined by insults that helped him win a crowded Republican primary election.

In recent days, Trump and his supporters have raised anew a number of deeply personal attacks against Clinton, questioning her role in her husband’s infidelities and casting her as a corrupt tool of political donors and special interests. Trump has also assailed a 1996 Miss Universe pageant winner for her weight gain — an incident Clinton used in the this week’s debate to portray Trump as sexist.

“The Clintons are the sordid past. We will be the bright and very clean future,” Trump declared in New Hampshire.

Trump and Clinton meet again on the debate stage in 10 days, this time in St. Louis.

In a nod to the concerns expressed by some Trump allies that he was insufficiently prepared for the first faceoff, Trump’s campaign and the Republican National Committee released a survey intended to engage supporters online. It asks whether he should use the second debate to criticize Clinton for her policies on terrorism, economics and trade. Absent is any inquiry about whether Trump should bring up her husband’s infidelities.

In another reminder of how far this year’s campaign has veered into baffling territory, third-party candidate Gary Johnson, the former New Mexico governor, was being ridiculed after he was unable, in a television appearance, to name a single world leader he admired. The awkward moment drew immediate comparisons — including by Johnson himself — to his “Aleppo moment” earlier this month when he didn’t recognize the besieged city in Syria.

Perhaps no state knows Clinton better than Iowa, where she campaigned on Thursday, but she has consistently struggled to connect.

Her campaign is banking on the state’s in-person early voting, which started on Thursday, reflecting the premium that Democrats are placing this year on trying to get their voters to turn out long before Nov. 8. Democrats are concerned that a lack of enthusiasm will keep their voters from showing up in the same numbers that led to Barack Obama‘s victories in the past two elections.

nextPinellas candidates for state House get personal at forum