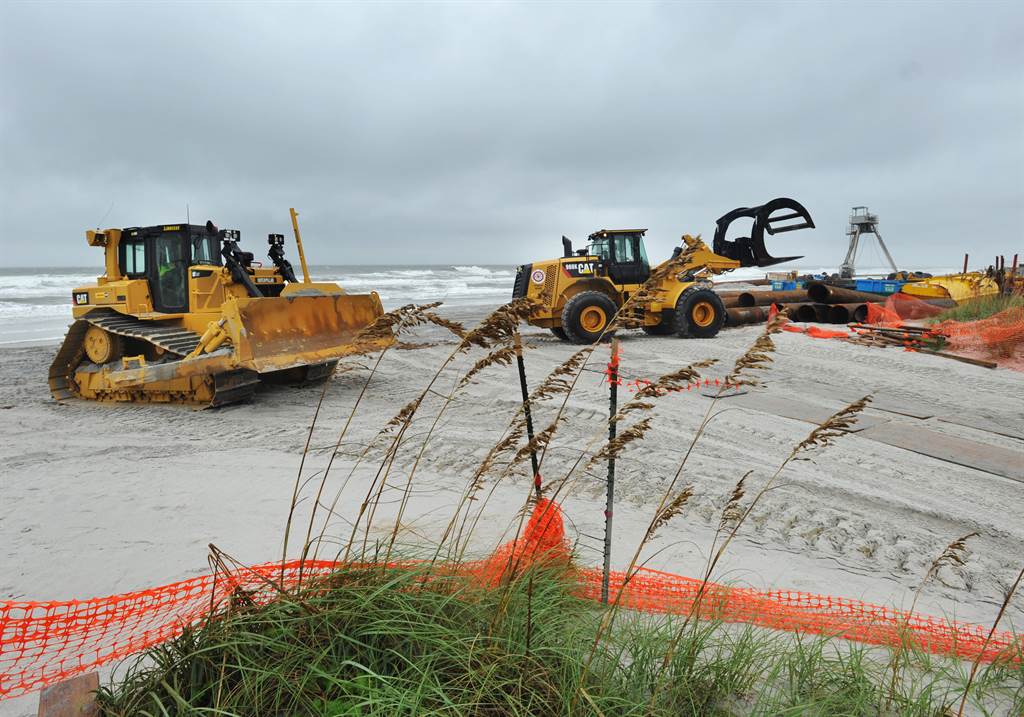 Hundreds of thousands of anxious people boarded up their homes and businesses and grabbed a few belongings to flee inland as Hurricane Matthew gained strength and roared toward the Southeast seaboard on Thursday.

In Florida, Gov. Rick Scott said the state, its skies already darkening from early outer rain bands of the life-threatening storm, could be facing its “biggest evacuation ever” as Matthew menaces almost all the state’s Atlantic coast.

As people hurried for higher ground, authorities in South Carolina said a motorist died on Wednesday after being shot by deputies during an altercation along an evacuation route.

Scott said Florida, its skies already darkening from early outer rain bands of the life-threatening storm, could be facing its “biggest evacuation ever” as Matthew menaces almost all the state’s Atlantic coast.

About 2 million people from Florida across Georgia to South Carolina were being encouraged to head inland and away from the most powerful storm to threaten the Atlantic coast in more than a decade. Matthew killed at least 16 people in the Caribbean as it sliced through Haiti, Cuba and the Bahamas.

“This is a dangerous storm,” Scott warned. “The storm has already killed people. We should expect the same impact in Florida.”

Hurricane Matthew is barreling over the Bahamas and taking aim at Florida, expected to near the Atlantic coast starting Thursday night. The Category 3 storm has top sustained winds of 125 mph. Florida hasn’t been hit by a storm this powerful in more than a decade.

Florida emergency officials said 48 shelters in schools already have begun providing refuge to more than 3,000 people, some with special needs, mostly in coastal counties where evacuations both mandatory and voluntary were underway. Patients also were transferred from two Florida waterfront hospitals and a nursing home near Daytona Beach to safer locations.

Deborah Whyte walked her dogs at Jupiter Beach Park on Thursday morning to check the surf.

“We boarded up our house and I boarded up my store. I have a clothing store in Tequesta. And we’re just hunkering down and waiting for it,” she said.

But others as far off as Georgia and South Carolina rushed to leave.

On Tybee Island, home to Georgia’s largest public beach, Loren Kook loaded up his pickup truck with suitcases and a computer late Wednesday afternoon to hit the road to metro Atlanta.

“It seems like a lot of the longtime residents are staying,” said Kook, who moved to the coast four years ago. “I’ve never sat through a Category Whatever. I’ll watch it on TV.”

Georgia Gov. Nathan Deal had urged more than 522,000 residents of six vulnerable coastal counties to voluntarily evacuate. An evacuation hasn’t been seen in 17 years in coastal Georgia. Part of its coast was under a hurricane warning.

Officials at Florida’s major airports said Thursday they are monitoring conditions as Matthew bears down on the state and warned of delays or cancellations. On its website, Fort Lauderdale International Airport announced plans to close at 10:30 a.m. Officials advised travelers to check with individual airlines about flight plans.

The storm is forecast to near the Florida coast starting Thursday night, potentially as a Category 4 storm with 130 mph winds. Any slight deviation could mean landfall or it heading farther out to sea. Either way, forecasters say it will come close enough to wreak havoc along the lower part of the East Coast, dumping up to 15 inches in rain in some spots. Storm surge of 5 feet to 8 feet was expected along the coast from central Florida into Georgia.

The National Hurricane Center in Miami said tropical storm conditions with rain and wind are first expected in the state later Thursday morning.

Bike shop owner John Long, who lives in Cape Canaveral, said Thursday he was glad he decided to stay put even though most of his neighbors in the RV park had evacuated.

“No second thoughts,” said Long, who was reached by telephone as he sat in a lawn chair outside his RV.

“I’m not going to downplay the scenario, but right now, there is absolutely no sign there’s a hurricane offshore,” adding that it was drizzling with a slight wind.

South Carolina Gov. Nikki Haley planned to call for more evacuations Thursday, which would bring the total to about 500,000 people in the state. Florida urged or ordered about 1.5 million to leave the coast, said Jackie Schutz, spokeswoman for Gov. Rick Scott. About 50,000 people were told to go in Georgia.

Early Thursday, Matthew’s center was about 215 miles southeast of West Palm Beach, Florida, and slogging ever closer at a clip of 12 mph.