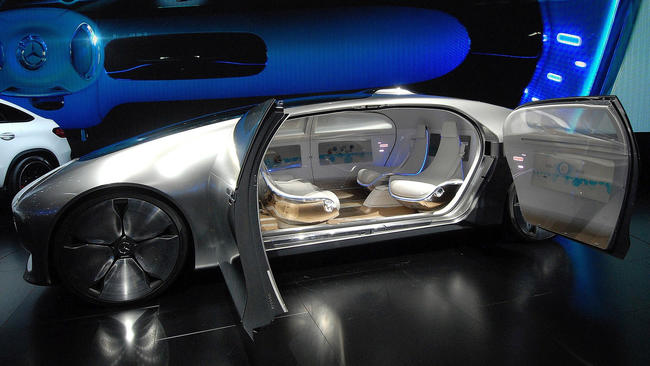 At the fourth annual Florida Automated Vehicle Summit in Tampa, government officials boasted about how far ahead of the game the state is compared to the rest of the nation in being prepared for the brave new world of autonomous vehicles. And they pledged not to  get in the way of the industry doing whatever they need to succeed with this quickly emerging technology.

“Help us help you and where you’re trying to go,” said Tom Byron, the assistant secretary for Intermodal Systems Development with the Florida Dept. of Transportation. “That’s what I’m asking. That’s it.”

There are currently 33 different companies involved in the development of advanced driver assistance systems and self-driving vehicles, including Tesla, Apple, Ford, Microsoft and Honda.

Byron boasted that unlike other states, the Florida Dept. of Transportation has a “healthy budget,” and added that Florida most importantly has the political leadership that is also unlike any other place in the nation in terms of supporting this new mode of transportation. “You’ve got proprietary data, trade secrets, we don’t want any of that stuff, ” Byron said reassuringly. “What we want to do is get input on what we can do.”

Leading this movement in Florida has been Republican state Senator Jeff Brandes, who told the audience that he was inspired to sponsor an autonomous vehicle bill in his very first year in the Legislature in 2011, after listening to a “Ted Talk” while driving up to Tallahassee from the Tampa Bay area.

The technology has changed, and so has the thrust of Brandes’ legislation in this area. Earlier this year, the Florida Legislature unanimously backed HB 7027, Brandes bill that made Florida the first state in the nation to legalize fully autonomous vehicles on public roads without a driver behind the wheel. “That’s a game changer,” Brandes said, claiming that the law makes every 30-year plan created by various state and local agencies “wrong.”

“Not a little bit wrong, but a lot wrong,” he added. “This technology is just like 100 years ago when we moved from the horse and the buggy to the Model T.”

Brandes said that not are vehicles now becoming autonomous, but simultaneously they’re becoming more electric, saying that the industry has evolved to the point where it has gone from a car with 2,000 moving parts now to one that will soon just 20 moving parts. He said that upcoming electric vehicles now in production will be able to drive 200 miles on a single charge, and cost less than $25,000 by 2020 or 2022.

The St. Petersburg Republican said that he meets with hundreds of groups regarding specific issues or causes, and he says he asks all of them what their vision is, and who’s their champion. He said he is the champion of the autonomous vehicle movement in Florida. “My vision is that we continue to tread new ground, and we continue to work to make bold decisions,” he declared.

The conference started up on Tuesday with a short address by Tampa Mayor Bob Buckhorn, who said that the “intellectual capital” want choices when it comes to transportation, choices that don’t include building more roads. “It’s options,” he said, listing autonomous vehicles, Uber,  Lyft, HOV lanes and/or rail lines as essential choices.

“We need options, and we need to be thinking about what the future will be looking like, and what transportation is going to look like, not just next year, but 20 years from now,” the mayor said, adding that “the success of our cities is contingent on your willingness to think outside of that traditional box.”

And Buckhorn had a message for President-elect Donald Trump regarding his pronouncements that he supports a major infrastructure project.

“We’re the third largest state in the country, and we need to start acting like it,” Buckhorn said. “We need to start investing like it. I hope that the President-elect lives up to his campaign promises and starts to invest in infrastructure,” adding that, “we need to believe in a future that doesn’t look like today.”

However, some initial proponents of such a major plan have turned cold on it. That’s because Trump is calling for the government to avoid direct spending and borrowing by instead subsidizing private developers with massive tax credits for building roads, bridges and other projects. The developers would own the infrastructure and collect resulting cash flows from tolls or fees. The liberal Economic Policy Institute argues the plan is unlikely to lead to much new investment because it’s driven more by ideology — that private enterprise always trumps direct public investments in infrastructure — than by rational policy.

Giving the keynote address was urban planner and forecaster Dr. Anthony Townsend from the company, Bits and Atoms. FloridaPolitics will have a story about his speech later this week.