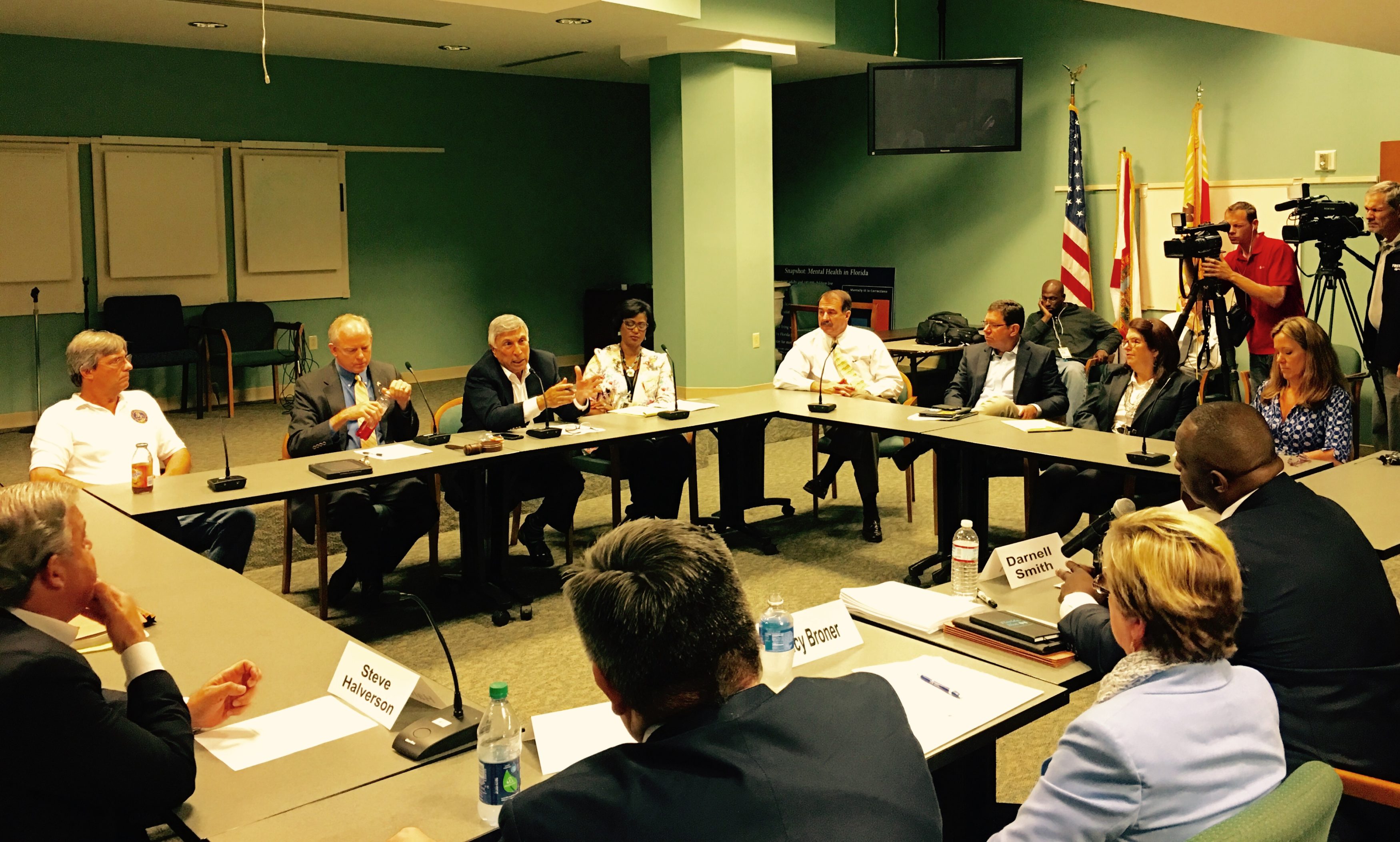 The subject: expanding Jacksonville’s Human Rights Ordinance to include members of the city’s LGBT community. The bill is expected to be filed by 3 p.m. January 4, with an eye toward committees and a full council vote on February 14.

The rhetoric of Wednesday’s meeting: familiar. Lots of phrasings about the economic and the moral case for the HRO from its biggest advocates on Council and other prominent community leaders and figures.

Bowman noted that President-elect Donald Trump “supported LGBT” at the GOP Convention and got applause, while HB 2 was a “disaster” in North Carolina, suggesting that both were auguries of change.

Jacksonville Chamber Co-Chair Darnell Smith urged council co-sponsorship for what he called a “Jacksonville solution,” which “truly represents who we are as a community.”

“We don’t want anyone in our community to be discriminated against for any reason,” Smith said, adding that the HRO won’t take away anyone’s religious freedoms.

Smith lauded Mayor Curry for his departmental directive protecting LGBT city and vendor employees from discrimination, saying that it’s “time to act” on the HRO, a “comprehensive” bill “written in a tenor and tone of togetherness.”

Smith implored the eight council members on hand to co-introduce the bill.

Others followed with their own pitches.

Steve Halverson of Haskell spoke further of support from the Jacksonville Civic Council and its “strong support for a comprehensive human rights ordinance.”

Hugh Greene of Baptist Health called the lack of an HRO expansion an “embarrassment” and an issue that “clouds our city.”

Pastor John Newman asserted that HRO expansion will “help us clarify that this is a welcoming city.”

The bill, said Jimmy Midyette of the Jacksonville Coalition for Equality, synthesizes the “best bits” of the two previous bills filed in attempts to expand the HRO.

Discussion followed regarding the difficulties of business recruitment, and other issues, with Councilman Hazouri noting that investments in sports facilities and entertainment venues might come to naught because entertainers won’t want to perform in a place without legal protections for LGBT people.

The bill was then presented to the council members and VIPs in attendance, explaining the specific additions of “sexual orientation” and “gender identity” to ordinance language, and the various carveouts and exceptions that protect small businesses and religious organizations.

“We’re not telling every business in the city that they need to retrofit their bathrooms,” Midyette said.

Then, the call for co-sponsors.

Jim Love reiterated his support and vowed to co-introduce the bill.

Tommy Hazouri likewise said he was still all in.

Councilwoman Katrina Brown had questions about restrooms in small businesses, like her family’s restaurant. She was told that transgender people were advised, via the bill, to use the bathroom they are comfortable with.

And the bill stood with three co-introducers.

Council President Boyer urged the bill to “go through the committee process deliberately.”

“We have had a long period of time in which to debate and evaluate our positions,” Boyer said, urging a normal committee cycle.

Will the third time be the charm for attempts to add LGBT protections to Jacksonville’s Human Rights Ordinance?

The bill went down in two versions in 2012. A “compromise” bill, which would have kept the “T” out of the protections rendered, fell 10 to 9 after one committed supporter, Councilman Johnny Gaffney, got “confused” and voted no.

Then, the original fully-inclusive version was defeated 17 to 2.

Gaffney did not ask for a re-vote. Years later, he would say he was pressured to vote no by the administration of former Mayor Alvin Brown.

After 2012’s down vote, the HRO remained on the backburner as a political issue. That backburner got hot during the 2015 mayoral campaign, contributing to Brown’s defeat.

That bill was preceded by Hazouri’s council colleague, Bill Gulliford, filing his own bill pushing for a referendum on the HRO. Gulliford’s expectation was that the referendum wouldn’t pass.

The Hazouri bill sought to expand equal protections under the law, including housing and employment, as well as public accommodations, to people regardless of sexual orientation (real or perceived), gender identity, or gender expression.

In filing the bill, Hazouri’s office issued a prepared statement decrying the Gulliford bill, saying that a “referendum would lead to months and months of hateful rhetoric that would fully divide our city. Outside groups on both sides would come in with staff, and money would pour in from outside sources.”

The early weeks of 2016 were fraught with conflict, with Equality Florida and the Human Rights Campaign’s lobbyists facing off with national firepower on the opposing side, such as Roger Gannam of the Liberty Counsel and Barronelle Stutzman, a Washington State florist who was sued for not providing flowers for a same-sex wedding.

As the issue began to dominate the Jacksonville body politic, it began to look like Hazouri and bill co-sponsors Jim Love and Aaron Bowman were outgunned.

Team Hazouri counted the votes. And quietly, the press leaks began one February weekend: his HRO bill was to be withdrawn.

And at a council meeting a few days later, it was pulled.

Since then, the noise has been that the bill would be brought back.

The conventional wisdom: that the bill would be timed more conveniently after the pension reform referendum passed in August.

That came and went, as did the general election, and the Christmas season, and New Year’s fireworks.

However, January rolled around, and advocates of HRO expansion are pushing yet again.

FloridaPolitics.com reviewed the legislation – one that has seen many different iterations.

But one signature virtue the latest version has is simplicity.

The 14-page monster of a bill was pared down to a more manageable four pages.

Part of that bill details the parts of city code – equal employment opportunity, public accommodations, and fair housing – that would be amended if the bill passes.

“Wherever protected categories are listed,” the text reads, “sexual orientation and gender identity … shall be added to the list.”

The bill attempts to fix the definitions of gender identity as a “consistent and uniform assertion of a particular gender identity, appearance, or expression.”

That “consistent and uniform assertion” language is intended to circumvent an expected legislative loophole: “that gender identity shall not be asserted for any improper, illegal or criminal purpose.”

That language is intended to short-circuit the critiques of HRO expansion as a so-called “bathroom bill,” able to be exploited by lavatory malingerers.

The bill also offers carve out exemptions (as did the 2015/16 bill) for religious institutions, including schools and affiliated non-profits, and small employers in the hiring process. In particular, the bill says that legislators have “carefully considered”

And it allows for employee dress codes, as long as “such dress code shall not be based on sex stereotypes.”

As well, the bill is predicated in recent evolutions of city policy, framing Jacksonville as an “inclusive and welcoming community, wherein no discrimination should occur.”

The bill notes that the Duval County School Board, Jacksonville Sheriff’s Office, JEA and JTA, and the Jacksonville Port and Aviation Authorities all codify similar protections. Meanwhile, the bill cites Mayor Curry’s “departmental directive” protecting employees of the city and its vendors from discriminatory actions in the workplace.

Of course, there is a catch. Curry, in issuing that directive almost a year ago, waved a caution flag.

“Based on the extensive community discussion and the actions that I have taken and directed, I have concluded my review, analysis and determination of this issue, and as such, I do not believe any further legislation would be prudent,” Curry observed.

If the bill were to get ten supporters – and an informal vote count by one advocate says that it should have 11 – then that would push it past the threshold for passing.

Our understanding is that the mayor’s office would prefer 13 votes in favor of legislation; that supermajority would remove the question of whether or not Curry would veto it, sign it, or take the middle ground and let the bill become law without his signature.

Before the bill can get to the full council, it has to get to committees, and a lot can happen in those council panels.

In 2012, Johnny Gaffney supported HRO expansion in committee, before changing his position at the council meeting.

The hope among advocates: that the bill only gets heard in Rules.

The reality: there will be a push to have the measure heard in other committees.

There is hope that Council President Lori Boyer, who said that the discussion had barely gotten started in 2016 when Hazouri pulled his bill, will ensure the process is not distracted.

There is hope also that bill advocates, such as JEA’s Mike Hightower, can convince social conservatives like Councilman Sam Newby to go along.

There is also hope that Sen. Audrey Gibson, chair of the local Democratic party, can ensure that all seven Democrats on the council are on board with the legislation.

If seven back it, only three Republicans are needed – and Jim Love and Aaron Bowman are two of those Republicans.

Former Council President Greg Anderson, who took a thoughtful position toward the process during his year in the center chair, could well move from a maybe to a yes.

The same could hold true for President Lori Boyer.

In June, Boyer said that “for some of us,” Boyer said, the sticking points are “all about language,” including reasonable exceptions and accommodations.

As well, the previous discussions never got to issues like how other jurisdictions handle similar legislation.

“The dialogue can hopefully happen before the bill is filed.”

And Anna Brosche, the chair of the Finance Committee, offered conceptual support for legislation on the campaign trail … but she wants the legislation to protect all parties.

There is room to get over 10 votes, if all of these variables play out in the right way. The question in 2017 is similar to that of 2016: can the agents of change demonstrate that they have mastered the process of manufacturing consensus?

There are hints of problems in that process. One observer has framed the effort as one of “too many cooks in the kitchen.” Meanwhile, questions remain as to whether there should have been more groundwork laid via backchannels before filing the bill.

At a time when mayors of cities like Orlando and Tampa are telling businesses looking at Jacksonville that the city is “backwards” on this issue, and the NCAA is requiring anti-discrimination legislation as part of its scoring matrix for assigning tournament games, a lot may be riding on the answer to that question.