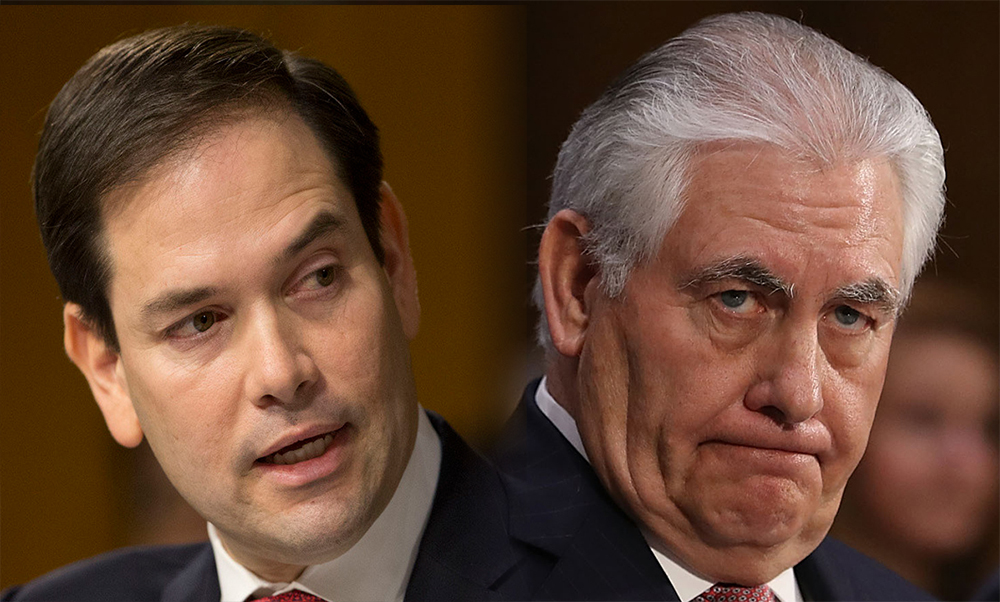 Marco Rubio promised during his campaign for re-election to the U.S. Senate that he would stand up to Donald Trump when necessary.

It came Wednesday during a confirmation hearing for Rex Tillerson, Trump’s choice for Secretary of State.

Rubio responded with what I thought was his finest hour as the junior senator from Florida. He showed plenty of backbone, conviction and passion in relentlessly hammering Tillerson about his stance (or non-stance) on Russia’s appalling human rights record.

It was a bold gambit, but it’s one I believe Rubio made on principle. In so doing he risks the wrath of the incoming president, not to mention his own Republican Party.

That showed a truckload of gumption.

Now, I may have to amend the previous sentence if after all that Rubio toes the GOP line and votes to confirm Tillerson. I can’t imagine that happening now, though, and as it stands now, Rubio could be the swing vote that would lead the powerful Senate Foreign Relations Committee to turn thumbs-down on Tillerson.

That wouldn’t necessarily doom his appointment, as the full Senate could confirm him with a simple majority vote. Republicans hold a 52-46 edge there (with two independents, who caucus with Democrats).

Taking the political intrigue out of it for a second, though, Rubio’s action during Wednesday’s hearing backed up his full-throated condemnation of nations like Russia and Cuba who rule with torture, murder and a disregard for human life.

I haven’t agreed with Rubio’s persistent hard-line stance on Cuba, mostly because I believe the U.S. policy of sanctions has succeeded only in bringing misery to the Cuban people. But there is no such ambiguity with what’s happening with Russian President Vladimir Putin, and Rubio placed himself squarely on the front line in the battle to oppose him.

When Tillerson said “I would not reach that conclusion” after Rubio asked if the nominee considers Putin a war criminal, what followed was a statement of fact that was a stinging indictment of what appears to be president-elect Trump’s position.

“Let me describe the situation in Aleppo, and perhaps it will help you reach that conclusion,” Rubio said. “In Aleppo, Mr. Putin has directed his military to conduct a devastating campaign (assisting the Syrians). He has targeted schools, markets, and other civilian infrastructure that has resulted in the deaths of thousands of civilians.

“This is not the first time Mr. Putin has been involved in campaigns of this kind. Based on all that, and what’s publicly in the record about what has happened in Aleppo … you are still not prepared to say Vladimir Putin and his military have violated the rules of war and conducted war crimes in Aleppo?”

Tillerson said those were “serious charges” and he needed more information.

Rubio shot back, “It should not be hard to say that Vladimir Putin and his military have conducted war crimes in Aleppo. It is never acceptable, you would agree, for a military to specifically target civilians, which is what’s happening there. … I find it “discouraging” your inability to cite that…”

But he wasn’t done, following up with, “Do you believe Vladimir Putin and his cronies are responsible for the murder of countless dissidents, journalists and political opponents?”

Tillerson said didn’t have enough information, so Rubio gave him some.

“Are you aware that people who oppose Vladimir Putin wind up dead all over the world – poisoned, shot in the back of the head? Do you think that is coincidental, or do you that it is possible – or likely, as I believe – that it was part of an effort to murder his political opponents?”

“None of this is classified, Mr. Tillerson. These people are dead,” Rubio said.

It was a promise kept by Rubio. In Washington, that is especially unexpected and refreshing.