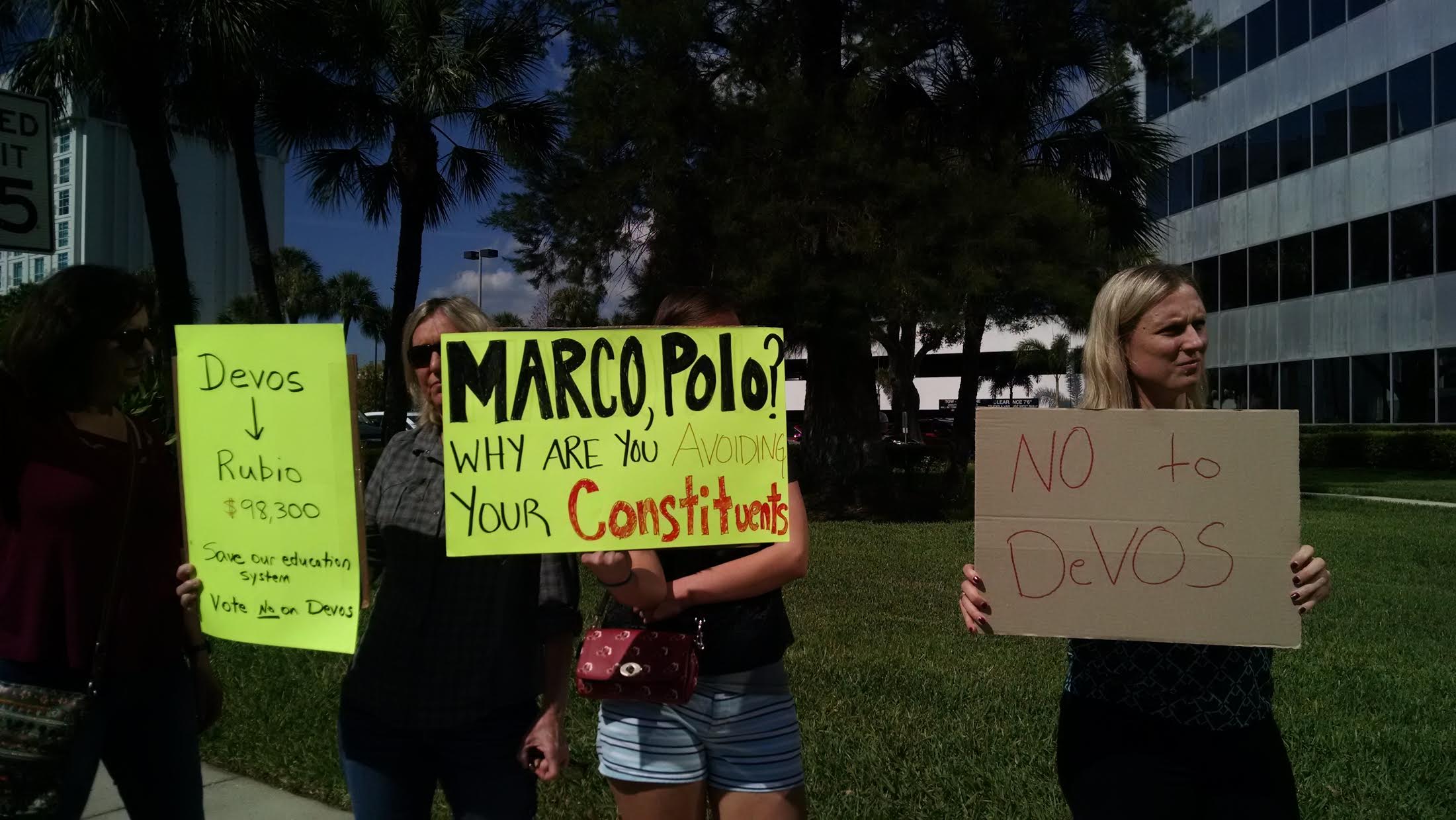 Last month, Marco Rubio had harsh words for Rex Tillerson when he came before the Senate Foreign Relations Committee as Donald Trump‘s pick for Secretary of State. But the Florida senator ultimately went ahead and supported the former ExxonMobil CEO anyway.

With the Tillerson turnaround fresh on their minds, more than two dozen activists gathered in front of Rubio’s Tampa district office Monday, urging him to reject DeVos as the next Secretary of Education when her name comes up for a vote Tuesday.

But they are not expecting him to do so.

“Betsy DeVos is totally uneducated, and she’s totally biased,” said Sue Jenkins, a former Wisconsin schoolteacher who spends winters in Port Richey and summers back in the Midwest. She blasted DeVos for her dedication toward vouchers and privatizing education.

“We privatize the schools; we pay them money. Somebody’s going to make a profit.”

Many of those at the protest want Rubio to recuse himself from the vote because he received campaign contributions from DeVos. Then again, so have a lot of other Republicans in Washington.

DeVos admitted as much in her one confirmation hearing, saying “it’s possible” that she and her husband (Dick DeVos Jr.) have given $200 million to candidates over the years. That includes $2.7 million to GOP candidates in the 2016 election cycle alone, including $5,400 to Rubio.

“She’s clearly not qualified,” argued Pam from Madeira Beach. “The only clarity we got from the confirmation hearing is that she’s against public education.”

Last week Rubio tweeted that “many Democratic colleagues tell me they have heavy pressure from left-wing radicals to opposed everything before they know what it is,” irking some of the protesters.

“I don’t think I’m a left-wing radical nut,” said Tampa resident Jennifer Hollowell. “I’m a 53-year-old stay-at-home mom. I’m just passionate about the issues, and obviously Rubio’s not listening to me, but I am a constituent.”

“He’s been calling a lot of people who have been contacting him ‘extremist liberals’ which is pretty misleading,” added a Brandon woman named Courtney (no last name was given).

Senate Democrats Monday began what is expected to be a 24-hour marathon speech supposed to climax at noon Tuesday, right before the Senate is scheduled to vote on DeVos’ confirmation.

With two GOP Senators (Lisa Murkowski of Alaska and Susan Collins of Maine) announcing their opposition, it could result in a 50-50 tie. If that should happen, Vice President Mike Pence will likely be called to cast the tiebreaking vote for Trump’s selection.

“People contribute to Senator Rubio’s campaign because they support his agenda,” Mandreucci said. “Ms. DeVos is a strong supporter of empowering parents and providing educational opportunity for all, policies Senator Rubio has supported for over a decade. Her nomination is opposed by Democrats who take millions of dollars from the big unions obsessed with denying school choice to low-income children. Senator Rubio looks forward to voting to confirm her.”