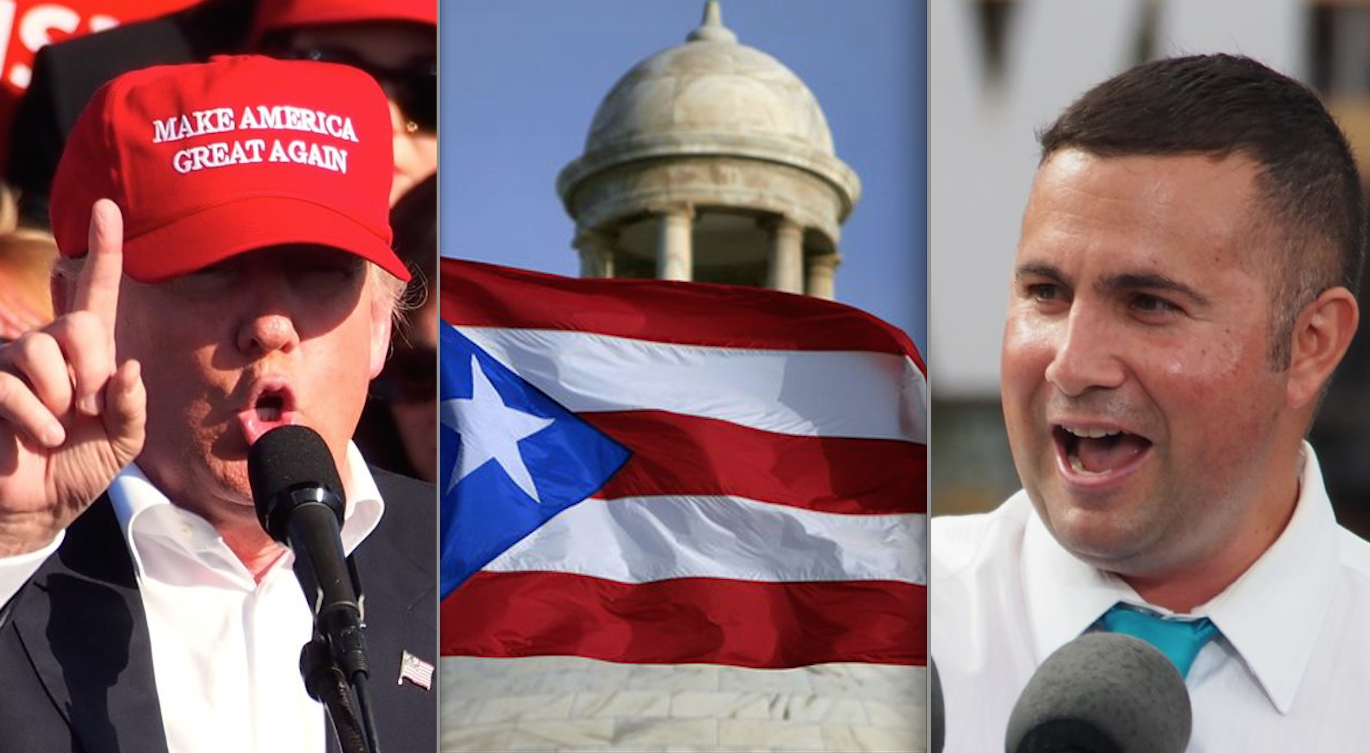 The president sent out two tweets, one Wednesday night and one Thursday morning, tying Puerto Rico relief to Democrats’ budget demands – and declaring that he won’t go for it.

Behind the tweets is a quiet little budget battle also coming to the attention of Puerto Ricans, as Democrats and Republicans work on a deal to help the island. But there also are disputed reports the pact could pit two desperate island needs against each other: relief for health care, and relief from crushing debts, potentially dividing Puerto Ricans.

But Trump’s tweets appear to focus on his opposition to providing anything to help the islanders, and on that point Puerto Ricans in Florida are shouting back in unison.

“Democrats are trying to bail out insurance companies from disasters #ObamaCare, and Puerto Rico with your tax dollars. Sad!” was the first tweet.

“The Democrats want to shut government if we don’t bail out Puerto Rico and give billions to their insurance companies for OCare failure. No!” read the second.

“This is absolutely FALSE,” said Orlando activist Phillip Arroyo, founder of the Coalition for Puerto Rico Justice in Orlando, contending that Puerto Ricans are only seeking equity.

“President Donald Trump has declared war against Puerto Rico,” charged Soto, the Orlando Democrat who is of Puerto Rican descent and whose Florida’s 9th Congressional District has hundreds of thousands of Puerto Rican residents.

“Mr Trump continuing in his role as Divider in Chief, has his new staw man,” bemoaned Anthony Suarez, president of the Puerto Rican Bar Association of Central Florida. “During the election, it was the Mexicans, and undocumented individuals. Now it is the Puerto Ricans, who are American citizens but have no voice in Congress to protect their interest.

“Why? Because they were invaded by U.S. forces in 1898 and kept as a ‘territory’ without rights for 119 years,” Suarez continued. “Perfect straw men for attempting to balance his budget priorities.”

Other Puerto Rican voices are responding widespread, particularly throughout Central Florida, ground zero for the Puerto Rican diaspora in Florid. Responses are coming through social media, decrying Trump’s apparent dismissal of the struggling American territory as abandonment and worse.

The president’s tweets are an apparent reference to a deal being negotiated by Democrats and Republicans in Congress this week.

Democrats are pushing to provide at least $500 million in the budget for additional Medicaid coverage and health care relief for under-covered Puerto Ricans. [At least one published report suggested $600 million.] Republicans reportedly have countered with an offer of $146 million. Negotiations are underway.

“He [Trump] is attacking our push for $500 million in Medicaid and Affordable Care Act funding for the island,” Soto stated. “We Puerto Ricans are American citizens who serve in large numbers in the U.S. Military and pay numerous U.S. taxes. Our Dem votes are essential to pass the budget and we’ll continue to fight for our values. We are not asking for a bailout we are asking for equal treatment”-

Puerto Rico is suffering from separate but related crises, a collapse of its federally under-funded [compared with states] health care system, leading doctors and other medical professionals to flee the island in droves because they can’t get paid; and an economic collapse starting from $75 billion in government debt the commonwealth has declared it cannot pay, which is leading to widespread cutbacks and even closures of schools, hospitals, utilities, police, fire, and other public services.

The PROMESA deal struck last year was to address the problems through economic, regulatory and law reforms, federally-manded austerity measures, some creative financing proposals, and some critical debt restructuring. But now that too may be on the line.

Reports Wednesday and Thursday indicated that the Congressional budget deal in the works may also come with a hitch that already is dividing Puerto Ricans on the prospect: health care relief – in exchange for a delay or revocation of debt relief mechanisms set up in PROMESA.

Soto indicated he has not seen or heard anything about such a hitch being included in negotiations.

He said he has spoken with key Democratic negotiators about the matter, including House Democratic Whip Steny Hoyer of Maryland and U.S. Rep. Nita Lowey of New York.

Still, if such a hitch does appear in a budget deal, opposition likely would arise quickly among stateside Puerto Ricans. It’s already arising.

“Darren Soto or any other member of Congress should not celebrate if the $600 million in health care for Puerto Rico is approved in the U.S. Congress,” Arroyo said. “We already know the funds approval was conditioned on exchange of freezing Puerto Rico’s ability to restructure its debt so hedge funds and bondholders can continue to get paid while school on the island are shut down.”

nextBudget conference committee gets down to work, with time running short