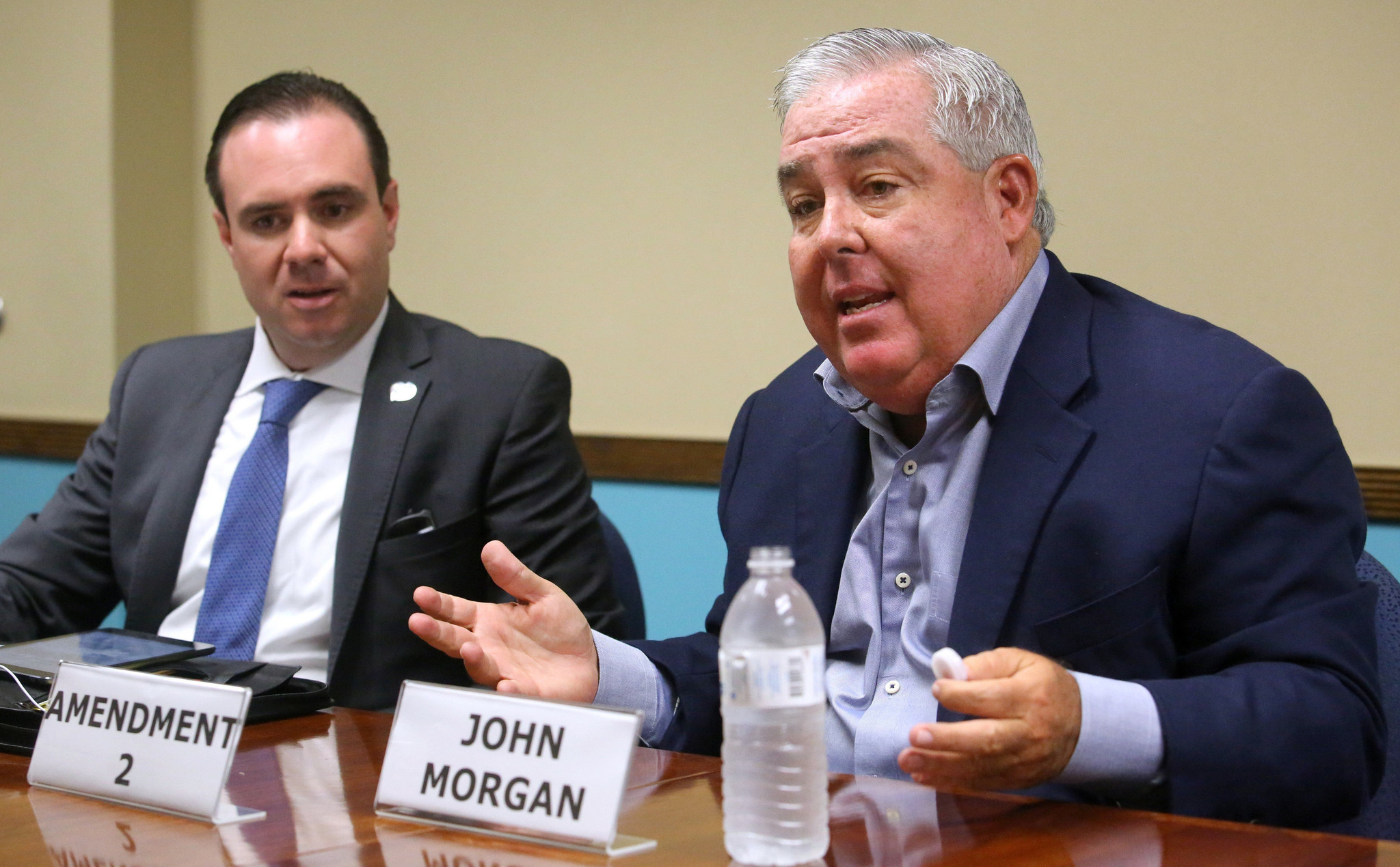 The headline writers had an easy job Friday night after the Florida Legislature failed to agree on rules to enact the medical marijuana amendment supported by 71 percent of Florida voters last November.

“Up in smoke: Legislature can’t agree on medical marijuana,” read The Associated Press.

In other words, the headlines wrote themselves.

What has been harder to discern is why the deal fell apart. After all, the House and Senate had agreed on most key parts of a bill putting rules in place for Amendment 2. Only Friday did this deal collapse after the chambers could not agree on the number of retail dispensaries that a medical marijuana treatment center can operate.

So who is to blame?

If you ask John Morgan, the outspoken Orlando trial attorney who was the political godfather to the 2014 and 2016 pot initiatives, the blame lies squarely on the shoulders of Ben Pollara, who, before Friday, was Morgan’s perceived to be proconsul in Tallahassee as the executive director of Florida for Care, an advocacy organization which was formed, in part, to lobby the Legislature on issues related to the expanded use of medical marijuana. Pollara, a South Florida Democrat who works in both political and policy arenas, was also the campaign manager for United for Care, the chief political organization pushing for passage of Amendment 2.

“Ben Pollara fucked the patients,” Morgan said in an exclusive interview with FloridaPolitics.com Saturday morning. “The person who strengthened the cartels (a reference to the seven existing licenses permitted to cultivate and distribute medical marijuana in Florida and who have been on the opposite side of Florida for Care as the Legislature debated the implementation of Amendment 2) the most is Ben Pollara.”

As first — and astutely — reported by Allison Nielsen of Sunshine State News, it was, in fact, the ‘pro-medical marijuana lobby’ that killed HB 1397.

It was Florida For Care which pushed the issue of limiting the number of dispensaries for growers at the last minute to force the state to issue more licenses to get rid of … the original seven growers allowed to dispense the drug across the state.

At the eleventh hour, insiders said, Florida For Care lobbyists Frank and Tracy Mayernick put pressure on Senate President Joe Negron over the cap numbers to ultimately force the state to issue more licenses and break up the seven initial medical cannabis growers.

Morgan says that rather than working toward a bill that would have allowed patients unfettered access to the burgeoning medical marijuana market, Pollara deployed the lobbyists (with whom Morgan says he has had no interaction) because Pollara was also working for “other prospective licensees” who wished to see the number of available licenses increased, but not so much that the market would be overrun.

To Morgan, this was an inherent conflict of interest.

Morgan said he only learned three weeks ago about Pollara’s outside clients. He said that lobbyist William Rubin brought up the issue when the two men discussed why the Legislature wasn’t moving quicker to implement Amendment 2.

Morgan says he confronted Pollara about the conflict of interest, at which point, Morgan says, Pollara began “screaming about the ‘evilness of the cartels.’ “

“The only compensation I have ever sought or received for work related to medical marijuana has been for political consulting and lobbying,” said Pollara. “I have always viewed any financial stake in the marijuana industry as a clear conduct with my roles as an advocate and leader of these two organizations.”

The first sign of trouble between Morgan and Pollara, who have for the last four years had a symbiotic political relationship, appeared Friday evening when Morgan tweeted, “My #ArmyOfAngels will be shocked to learn of the person responsible for this deadlock!” The tweet was accompanied by imagery from the iconic scene in the Godfather 2 when Al Pacino‘s character, Michael Corleone, confronts his older brother, Fredo (played by John Cazale) about his role in a failed assassination attempt. 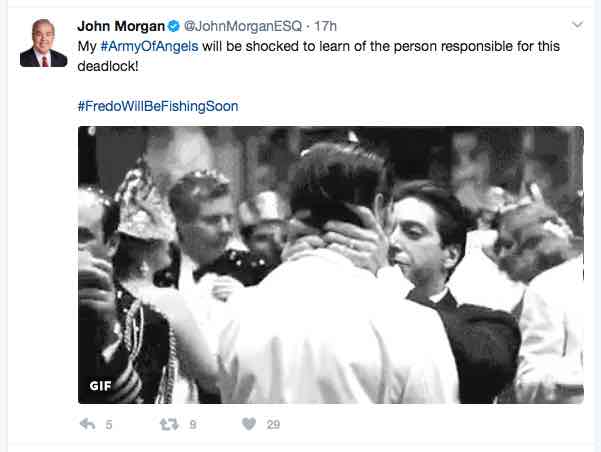 In subsequent tweets — perhaps as the liquor began to flow at Casa Morgan — the always sharp-witted Morgan called out Pollara by his Twitter handle, setting off rampant speculation about what could have happened between the two one-time political allies.

By Saturday morning, Morgan was kaput with Pollara.

“The first thing I am going to do is make sure the people who helped me pass Amendment 2 know not to give Ben Pollara another red nickel,” Morgan said.

As for the future of the medical marijuana initiative, it will now be up to the Department of Health to come up with rules for patients, caregivers, doctors and treatment centers by July 3 and have them implemented by October.

Morgan said he would urge Gov. Rick Scott to call for a special session to implement Amendment 2.