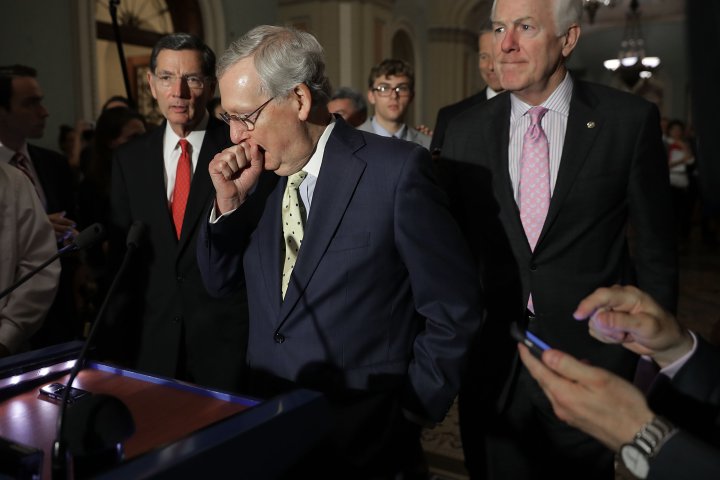 What most upsets the Democratic congresswoman from Tampa is that the bill “radically” restructures Medicaid.

“This is a dramatic overhaul of Medicaid that will cause families to lose care and present a very difficult budget to Florida,” she said in a conference call Thursday afternoon.

Medicaid is a federal/state program partnership that is administered by the states but mostly funded by Washington. In Florida, it’s mostly provided to children, people with disabilities and the elderly living in nursing homes suffering from specific ailments.

Currently, the feds pay on average about 64 percent; states pick up the rest.

The Senate GOP plan would repeal this structure, replacing it with caps on how much money states receive each year. Castor says this is a problem, because Florida already spends less on the program than most other states, despite it being the third largest in population.

Bloomberg News reports that, starting in 2025, the Senate bill would index Medicaid spending to a slower growth rate than the House version, which indexed Medicaid to the faster growth rate of medical inflation plus 1 percentage point, to try to keep pace with the disproportionate growth in health care costs.

Approximately 3.6 million Floridians rely on Medicaid, close to 20 percent of the state’s population.

“The Senate bill includes enormously consequential changes, that will clearly move the country backward on child and parent coverage,” says Joan Alker, executive director of the nonpartisan Center for Children and Families and a research professor at Georgetown University.

“The only question on my mind is how quickly and sharply this U-turn would occur,” she added, saying that it would ultimately end the guarantee to the state of federal funding for Medicaid.

Alker says what’s most provocative is that the restructuring of Medicaid has nothing to do with the repeal of the Affordable Care Act: “This is just something that Congress is doing while they’re in the neighborhood.”

The American Hospital Association, the American Cancer Society Cancer Action Network and the Association of American Medical Colleges all came out in opposition to the bill Thursday afternoon.

Under the Senate bill, the federal government would continue paying subsidies to health insurance companies through 2019. It would also provide $50 billion to help stabilize insurance markets and hold down premiums from 2018 through 2021 — in other words, until after the next presidential election.

Castor says that the Senate bill, unlike the House counterpart, does preserve pre-existing conditions protections. But she says that provision is “totally undermined” by the fact that states can waive other insurance rules that could weaken the protections for essential health benefits, as well as lift caps on what a patient pays to an insurer. Also, the bill would provide $62 billion in grants to states for similar purposes from 2019 to 2026.

Also, the bill would provide $62 billion in grants to states for similar purposes from 2019 to 2026.

At least four GOP senators are already indicating they cannot support the bill as written, raising the possibility there won’t be an up-or-down vote on the bill within the next week, a self-imposed deadline created by Senate Majority Leader Mitch McConnell.