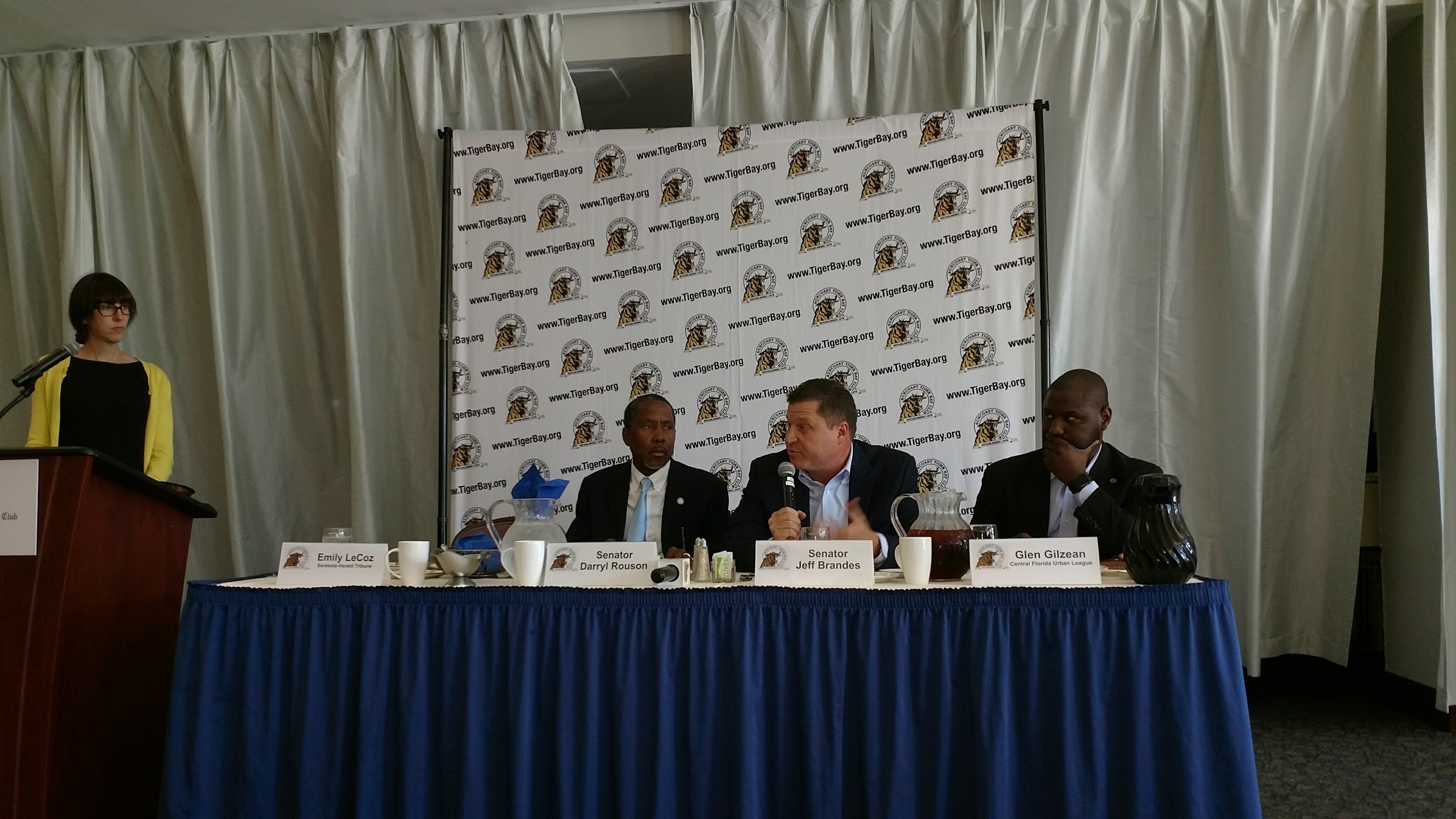 Over the past decade, deep Red states like Texas, Oklahoma and Georgia have enacted serious criminal justice reforms.

Florida? Not so much.

That was going to change in 2017, several state lawmakers predicted earlier this year.

“We walked into this session very high on idealism, thinking that we could accomplish quite a bit, that the climate was right for this,” said St. Petersburg Democratic state Senator Darryl Rouson, while speaking to the Suncoast Tiger Bay Club in St. Petersburg on Friday. “But based on what failed and what didn’t get through, we’re going to come back next year.”

Among the reform bills Rouson filed (before Session crashed and burned in Tallahassee) are those that would have raised the legal threshold for what constitutes a stealing offense from $300 (the price of the stolen object) to $1,000, which has been state law since 1983.

The powerful Florida Retail Federation strongly opposed that legislation, fearing it would increase opportunities for theft.

Brandes told the audience that he got religion on the subject a few years ago when he began serving on the Senate Criminal Justice Committee and became cognizant of how bad the system is working in the Sunshine State.

The Pinellas Republican gave the audience a flavor of how (un)favorably Florida ranks when it comes to prison sentencing. Brandes quoted a newly released report written for the Legislature by the Crime and Justice Institute that said longer prison sentences and fewer release options have been the main driving force of the growth of the elderly population in Florida prisons, with most Florida offenders leave prison with little or no post-release supervision.

Add to that the fact that the Legislature continues to pass bills that enhance, and not reduce the punishments of convicted felons has created a situation where Florida prisoners are serving longer and longer sentences. Brandes said that there is very little proof that doing so benefits society in the least.

“It is a broken system,” said Brandes, who added throughout the discussion that a comprehensive plan is what’s needed to turn around the entire system in Florida, not by passing “one policy here and one policy there.”

Rouson, a Democrat who has been in the minority ever since he was elected to the House in 2008, seemed to take a more modest approach, saying that he believed such reforms could come on an incremental basis.

Of the many proposals Brandes brought forward in the Senate during the 2017 Session included a bill to create a statewide task force that would take a “holistic” review of the state’s criminal justice system, including (but not limited to) sentencing practices, minimum mandatory requirements in statute, prison and jail facilities and criminal penalties in statute. It’s the type of bill that passed in other Republican controlled state Legislature’s around the country that kicked off their criminal justice reforms. While the bill received unanimous support in early committee meetings, it didn’t get a vote of the full Senate before the end of the session.

Brandes said the only way such reforms will get passed will require a broad bipartisan coalition of legislators with the vision and courage to enact such laws.

Gilzean, Brandes and Rouson all agreed that education and prevention, in the beginning, can also be crucial, since it would ideally prevent people from entering the criminal justice, to begin with.

One bill that seemed to address that situation during the most recent session  2017 Legislative Session in the Senate was a bill sponsored by Miami Republican Anitere Flores (SB 196) that would have required a law enforcement officer to issue a civil citation or require the juvenile’s participation in a diversion program when that juvenile admits to committing certain first-time misdemeanor offenses.

Brandes acknowledged that one reason why his colleagues in the Legislature aren’t as committed to the issue as he is that it pales next to jobs, insurance and education, among other topics that most citizens say they’re concerned about.

And he said lawmakers are attacked as being “soft on crime” for tackling the problem.

The hour-long forum was moderated by award-winning Sarasota Herald-Tribune reporter Emily Le Coz, whose December 2016 four-part series, “Bias on the Bench” found that judges sentence black defendants to more time behind bars than white defendants who had committed the same crimes and received the same points at sentencing. She said the most popular reactions she received from readers about injustices in the criminal justice system is that “it doesn’t matter. It’s their fault. They’re the ones who put themselves in that place.”

The Herald-Tribune report also spurred legislation that called for the state to analyze the same data examined by the paper with an eye toward racial disparity in sentencing and to publish an annual report of the results.

But like so much else regarding criminal justice reform this past session, that proposed legislation was postponed and ultimately died at the of the session.